• The US-China trade war had already set the stage for a lot of American companies to mull options to set up production houses in countries other than China.
• The onset of COVID-19 only reiterated this idea and exacerbated this emergency, with a lot of nations across the world vowing to diversify their supply chains. This augurs well for India as foreign investment would enhance the GDP, churn employment and increase foreign wealth.
• The government is already taking measures to woo foreign investors such as rolling out incentives, negotiating with foreign companies & identifying land pools for such factories. Some of these efforts are already bearing results.
• If India truly needs to be the world’s next factory, it must focus on imparting labour with specialized skills, innovation, developing world class infrastructure and improving the ease of doing business. 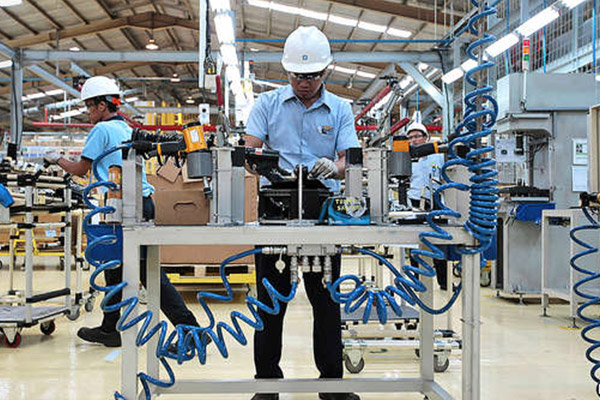 “All the world’s a stage, and all the men and women merely players …,” opined the famous English poet and playwright, William Shakespeare. And, if the developments since 2019 are to be considered, this famous Shakespearean monologue would perfectly make sense.

We have seen several ‘acts’ being played out in the hot and cold trade war between US & China, the world’s top two economies, in the battlefields of geopolitics and global trade since the beginning of 2018. Chinese producers began to face the heat of the war as they found themselves caught in the waves of the rising labour costs, a slowing economy and environmental regulations. What added to the woes of Chinese manufacturers was that a host of companies such as Apple, Foxconn, Danfoss, Samsung Electronics Co Ltd and Sony began looking for alternate production sources.

This, however, wasn’t the climax of this saga; it was only the precursor for the pandemonium, which was to follow in the coming months. The worst part of 2019 game at the fag end – the genesis of COVID-19 in China. Not only did it lead to the shutting down of factories in the industrial towns of Hubei and Wuhan, it also led to the crippling of supply chains all over the world. Further, as the novel coronavirus spread to the rest of the world and economies started crumbling, the world learned a key lesson – not to put all the eggs in one basket. In other words, the world learned the need to diversify the international supply chains and the zest to move out of China and set up production lines in other suitable nations has gained renewed momentum.

This would mean more inflow of foreign wealth, creation of more employment opportunities and higher growth in those countries where these firms decide to invest. It has initiated a rat race all over the world, with each nation trying to grab a bigger share of this investment pie. As Prof. R. Nagaraj, Indira Gandhi Institute of Development Research explains,

“India will have to compete with labour abundant countries such as Vietnam, Bangladesh to increase labour-intensive exports such as textiles. In technologically mature industries, India has a considerable advantage. It needs to step up scales of production by massive industrial and infrastructure investment to compete globally.”

However, unlike Vietnam, which is struggling with dearth of labour, India enjoys the advantage of having a young demographic pool and a large market for domestic consumption. It also has a democratic regime and a good ease of doing business score, making it an attractive investment destination.

Aware of this fierce competition, the Indian government has already initiated steps to lure international investors. For example, in the month of March, the government rolled out incentives to the tune of ₹48,000 crore to boost mobile phone manufacturing in the country. The government is also in talks with companies from US to attract investments in the fields of medical equipment suppliers, food processing units, textiles, leather and auto part makers, among others.

India is also developing a land pool nearly double the size of Luxembourg to entice businesses. Similarly, while the Ministry for New and Renewable Energy (MNRE) has coaxed states to incentivize setting up designated renewable energy manufacturing hubs in India, Ministry of Commerce and Industry (MOCI) is brainstorming hard to identify the champion sectors that would catapult India as the world’s factory. India is also said to be planning a tax holiday for companies bringing new investments.

Furthermore, state governments too, are leaving no stone unturned to woo foreign investors. For example, Odisha government is in talks with business houses in Japan, Korea and United States for investment in the state; while Tamil Nadu government has formed a special task force to charm investors from Japan, South Korea, Taiwan, Singapore and the United States post-COVID-19. With companies like Apple and Philips planning to augment their investments in the country, some of these efforts have already begun to fructify. According to media reports, German and Japanese companies are also showing a keen interest in the country.

To emerge as a global production hub and benefit from the backlash against China, India will have to take an approach consistent with the present times. The government’s 2019-20 Economic Survey points out that India should focus on specialisation at large-scale labour-intensive activities, especially in ‘network products’. Further, India should look for investments in raw materials like batteries for cell phones, components for vehicles and APIs for pharmaceuticals. This will kill two birds with one stone: invite foreign investors & bring the associated benefits; and make India ‘Aatma Nirbhar’, as the PM has envisioned. It will also reduce India’s import bill and change the game for India from being an assembly point for the world to being the brick and mortar behind its economic success.

This also calls for the need to impart skills to our labour. Prof. Sunitha Raju, IIFT, notes:

Another thing that needs to be done is to further improve the country’s ease of doing business, where the lot of progress has already been made by the government. Even today, while it takes 18 days to start a business in India, it barely takes half-a-day with a single form and minimal cost to set up a business in New Zealand. India also lags behind its counterparts in the field of property registration. It is worth mentioning that while India has five less procedures than Brazil (14 days) to register one’s property, it takes much less time to do so in Brazil (31 days) than in India (49-68 days).

Coming to the field of tax payment, although Indonesia (26) has more than double the number of payments per year than India (10-12), its citizens spend far less time in paying them than India. Similarly, while it takes approximately four years to enforce a contract in India, Brazil and Indonesia spend 2.2 and 1.1 years, respectively to do so. Taking these steps can catapult India to the top 50 rankings. 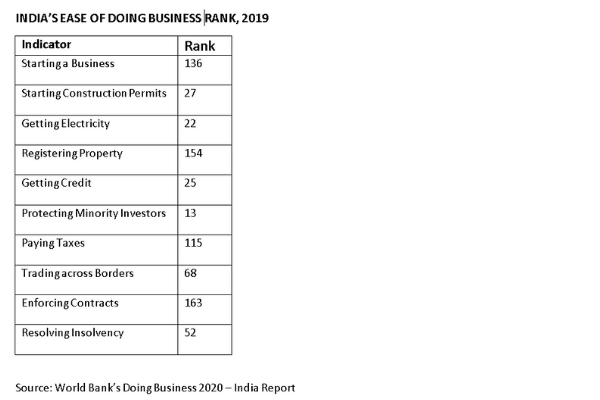 COVID-19 does not mean the end of globalization; rather it is the harbinger of change and is expected to unleash new economic opportunities which will herald a new world order. It will not only obligate firms to “decouple” from China, but also spur new supply chains all over the world. India can be way more than just another cog in this trade wheel and can play a major role in buttressing other economies of the world, by becoming the world’s newest production hub. Production of raw materials, facilitating skill upgradation and improvement in the ease of doing business indicators identified above will go a long way in facilitating this change.

Enquiry for India’s path to become a global manufacturing hub