• China & US have indulged in a series of tit-for-tat tariff measures over the last few days, escalating their trade war, which began sometime around Jan’18.
• This ensuing imbroglio is likely to have major repercussions for the global trade landscape, as well as for India.
• India stands to benefit from this trade row, in terms of potential for increased exports, but also needs to guard against dumping of commodities by China.
• An analysis by CATR projects higher potential gains from exports by India to US (US$ 2.25-5 billion) as compared to China (US$ 1.6-4.96 billion) due to the ongoing trade war.

The last few days have witnessed an interesting turn of events in the trajectory of trade tensions between the world’s top two economies – US & China. With the US government deciding to increase tariffs on US$ 200 billion worth of Chinese goods from 10% to 25% citing the lopsided nature of this trade, protection of its economy from IPR theft by leading Chinese firms & an unfavourable balance of payments, this battle has new chapters unfolding.

This move led to a hike in tariffs by China, which accuses US of engaging in unilateralism and protectionism. These tariffs on US$ 60 billion worth of US goods will be effective from June 1, 2019 and vary between 5% & 25%, according to China’s Tariff Policy Commission of the State Council. This further led to a proposal by the US Trade Representative (USTR) to increase tariffs levied on 3,805 Chinese imports, pegged at about US$ 300 billion.

The ongoing confrontation between the two giants is likely to have a ripple effect on the global economy. According to a report released by the International Monetary Fund, this tension is already responsible for a “significantly weakened global expansion”. Some of the other possible international implications of this war include the re-pricing of risk assets globally, stricter financing conditions, slower growth, a fragmented global trading framework and weakening of trade rules.

However, the situation also presents a golden opportunity for India. According to UNCTAD estimates, EU (US$ 70 billion) & Japan (US$ 20 billion) are most likely to reap the benefits of this impasse. But India’s exports are also anticipated to grow by around 3.5%.

The silver lining for India

The good news for India is that this hike in tariffs is not likely to re-route manufacturing back to US. Higher wages in US had prompted it to outsource production to commercially viable locations like China. But in the aftermath of this trade war, US companies will have to turn to other cost-effective production centres like India. A few tech giants have already taken steps in this regard. For instance, Apple has shifting their base to India’s Silicon Valley, Bangalore, for the production of iPhones. The US-India Strategic & Partnership Forum (USISPF) has affirmed that around 200 US companies are looking to shift base from China to India. 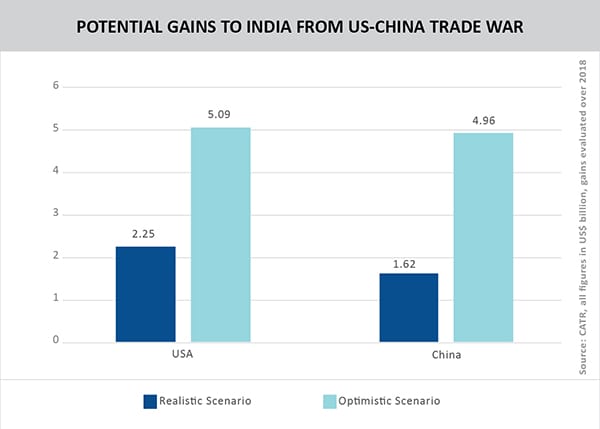 Potential product categories for enhanced exports to the US include motor cars, wooden furniture, chemicals, apparel and clothing, toys, games and sports, plastics, rubber, footwear, fish and paper. In the case of China, India can improve its exports in product categories like plastics, organic chemicals, pharmaceutical, fish grapes and carpets.

The current scenario also presents a great opportunity for foreign investors in India. As Lei Jun, the founder of Xiaomi points out, India is one of the leading markets for the mobile phone firm and it stands to attract large investments from China in the face of the current spat. A consequence of the increase of this investment, coupled with a shift of labour-intensive production out of China, is the creation of lakhs of blue & white collar jobs for Indians.

Mahindra Group Chairman Anand Mahindra seconds this view, and comments, “Even if they settle (US and China), a Chinese firm with large exports to the US would be wise to hedge & invest in a subsidiary in India & transfer its scale-manufacturing skills… A wave of Chinese investment in India may be imminent…”

While the locking of horns of China & US is, overall, a beneficial situation for India, the country needs to address a few structural bottlenecks in order to make the most of this situation. For instance, India needs to watch out for the stiff competition from other cheap labour markets like Vietnam, Cambodia, Thailand & Bangladesh.

The creation of textile SEZs, exporting fabrics other than just cotton, imparting relevant skills to the workforce & modernisation of production technology are some of the urgent measures that must be taken to tackle the situation.

India also needs to be mindful of possible devaluation of the yuan, necessitating a devaluation of the rupee to protect the interests of Indian exporters. According to an analysis by Indian Ratings and Research (Ind-Ra), inflationary pressures in the US could lead to weaker foreign portfolio investments by it in emerging economies like India.

Last, but not the least, the interests of domestic commodity sectors like steel, aluminium and copper need to be protected in particular, as there is a high probability of an increase in dumping of these products by China.

Webinar on How Indian and Israeli agritech startups are transforming agriculture

Webinar on India-UAE trade in F&B, foodtech and packaging