Strengthening India’s backward linkages in global value chains is critical to improve domestic value addition, especially in high-end manufactured products. Similarly, India’s forward integration is weak with developed markets like US and EU, an issue that needs to be urgently addressed.

• Global value chains bring a plethora of opportunities, making them an integral part of policy making. From internationalization of manufacturing an end product to providing an eclectic range of products for consumers under similar segment, trade through GVCs is continuously proliferating.
• From 2005 to 2015, India’s share in GVCs has reduced from 16.6% to 14.8%. Now, this reflects that the usage of Indian inputs for all foreign country’s exports aggregated, has in fact fallen marginally. Interesting point to observe here will be to analyse, how much individual economy depends on Indian inputs for their exports.
• According to the forward participation in GVC, India’s position seems weak as integration with developed economies is minimal. Only 0.4% of Indian products are further processed and exported from EU. Similar is the case with USA, UK, South Korea and Japan. In the case of ASEAN, with which we have trade agreements, the share of Indian inputs remains 0.7% in ASEAN’s exports.
• Higher backward GVC participation indicates that the economy is the hub of either a specific range of manufactured products (semi-skilled/skilled) or providing technical services. If India’s backward GVC participation needs to be assuaged, first step is to increase our imports of raw or intermediary products, add value and export. This is exactly what Japan and South Korea did five decades back. 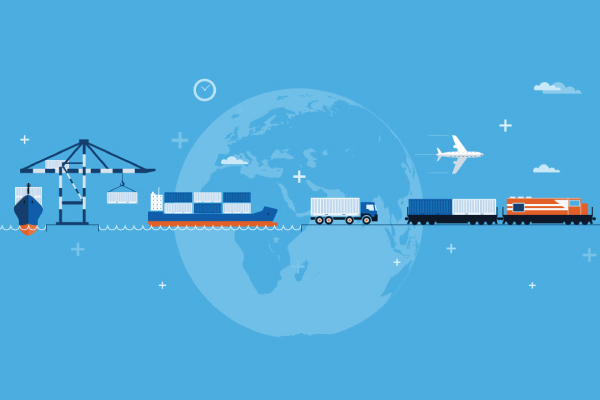 Global trade is a highly dynamic arena, which depends on multiple parameters and is highly volatile. From prices to protectionism, global trade has been subject to discussion and debate, especially the conflict of interests between developing and developed economies respectively. This clash is ongoing since the formation of GATT, as developed or industrial economies traditionally dominated international trade. But with the advancement of technology, rising incomes across the globe and reduction in poverty, trade needs a new lens to view and analyse. Issues which were relevant even a decade back seem obsolete, when it comes to policy making for global trade in contemporary times.

One of the imperative routes is global value chains, which bring a plethora of opportunities and is an integral part of policy making. From internationalization of manufacturing an end product to providing an eclectic range of products for consumers in every segment, trade through GVCs is continuously proliferating. Currently, approximately three fourth of global trade is directly happening through GVCs, which is close to US$ 13.5 trillion. This data point in itself explains the significance of participating in GVCs. In this article, we will be comparing India’s GVC participation with major economies having dominance in GVCs, using parameters like domestic value added in foreign final demand.

To begin with, let’s see how important are Indian inputs in a foreign country’s exports. In other words, how much are other countries dependent on Indian products for their further exports? This parameter is known as forward participation in GVCs. From 2005 to 2015, which is the year for which latest figures are available, the share reduced from 16.6% to 14.8%. Now, this reflects that the usage of Indian inputs for all foreign country’s exports aggregated, has plummeted marginally. It is interesting to note  how much an individual economy depends on Indian inputs for their exports.

Table 1: Forward participation in GVCs: Domestic value added in foreign exports as a share of gross exports, by foreign exporting country (for India) Source: Calculations based on OECD database, figures in %

According to the forward participation in GVC, India’s position seems weak as integration with developed economies is minimal. Only 0.4% of Indian products are further processed and exported from EU. Similar is the case with US, UK, South Korea and Japan. In the case of ASEAN, with which we have a trade agreement, the share of Indian inputs remains 0.7% in ASEAN’s exports. We have trade agreement with Japan and South Korea as well but the figures are lesser than in case of said multilateral trade agreement. Majority of ASEAN nations are either LDCs (least developed nation) or developing nations with comparable technological advancement. India’s weak forward participation in GVCs could be justified by two possible reasons. First, all products exported by India are utilized for final consumption in the destined economy. Secondly, India’s exports are limited to few countries (excluding developed economies) with meagre export diversification. Now the first reason is more germane in India’s scenario as India significantly exports to developed nations like USA, Japan or EU nations.

Now, higher backward GVC participation indicates that the economy is the hub/eccentric point of either manufacturing specific range of products (semi-skilled/skilled) or providing technical services. Current trade policies of India focus on manufacturing high end consumer products like electronics and pharma. If India’s backward GVC participation needs to be assuaged, the first step required will be to increase our imports of raw or intermediary products from foreign nation, add value and export. This is exactly what Japan and South Korea did five decades back.

It is important to compare two more parameters while commenting about any country’s GVC participation, i.e. domestic value added (DVA) and foreign value added (FVA) in macroeconomic variables like gross exports, imports and final demand. As per the calculations, India’s foreign value-added content of exports (FVA) is only 16.06% and the rest 83.9% is domestic value added (DVA). For computers, electronic and electrical equipment, our FVA is 38.2%, which is significantly higher than the average of all products. In Japan, for the same product category, FVA is only 15% and rest 85% is DVA. This tells us a simple story – for high end technological products, developed nations like Japan rely more domestically whereas for low end labor oriented products, developing nations like India rely more domestically. Similarly, India’s DVA in textiles, wearing apparel and leather exports is 84.2%.

This can be inferred in a specific way. Micro industry policy is desirable to escalate India’s GVC participation, rather than generic policies. For those industries where foreign value addition seems unrealistic in India like IT and ITeS, agriculture and textiles, focus should be to diversify export destinations and supply raw materials to other countries, which will bolster our forward participation rate. On the other hand, in sectors like electronics, electrical equipment and machinery, focus should be to improve efficiency and quality so that other economies can use our inputs for further processing.

Transforming our GVC indicators will definitely need time, but it should not be neglected. Ideally, the first step should be to make India a manufacturing hub. Missing out on GVC will keep us weak at global platforms, and prevent us from achieving our aspirations in international trade. Post the onset of COVID and the resetting of global supply networks in many sectors, India needs to be even more cognizant of emerging opportunities in GVCs.

Webinar on How Indian and Israeli agritech startups are transforming agriculture

Webinar on India-UAE trade in F&B, foodtech and packaging