India set to be the “rule maker” with G20 presidency

With the official handover of G20 from Indonesia on 16th November, India is ready to take over the presidency of the intergovernmental forum and work upon current global issues like political tensions, economic crisis, and climate change starting from 1st December. 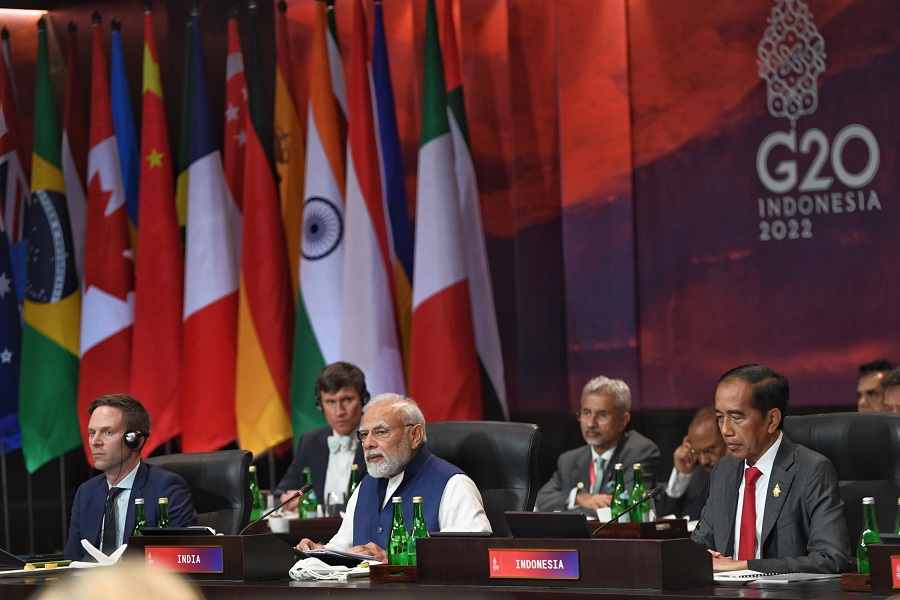 Amid a round of applause, Prime Minister Narendra Modi was handed over the presidency of G20 by Indonesian President Joko Widodo at the Block leaders’ summit held in Bali on 15th-16th November 2022, under the theme ‘Recover Together, Recover Stronger’.

After taking the G20 gavel of presidency, PM Narendra Modi said –“Together with each countries’ efforts, we can make the G20 summit a catalyst for global welfare”.

Ahead of assuming the presidentship on 1st Dec, The Indian Prime Minister while addressing the 95th edition of ‘Mann Ki Baat’ on Sunday 27th November said that “this is a huge opportunity and India must utilize the opportunity of G20 leadership by focusing on global good and welfare”.

Founded in 1999, the Group of Twenty (G20) is the premier forum for international economic cooperation which brings together world’s major economies comprising 19 countries and the European Union. The members of the group account for more than 80% of world GDP, 75% of global trade and over 60% of the total population.

The global leaders meet for an annual G20 Leaders’ Summit since 2008 for addressing current global political issues along with climate change mitigation, economic development etc. Prior to India, the summit was hosted by Italy in 2021 and Indonesia in 2022.

With current global scenario and overlay of geopolitics on the G20s core agenda this year, India has a lot on its shoulders. The task may seem difficult, but initially India’s success will rely on the outcome of “unparalleled multidimensional crisis” addressed at the Bali summit on November 16. Although the country has not invested much in multilateral rule-making institutions in the past, India has come out to be a leader in aspects like technology with public goods and its governance.

Speaking at the 7th edition of the Global Technology Summit (GTS) organized by Carnegie India, India’s G20 Sherpa Amitabh Kant said – “India is taking over the presidency of the G20 at the time when the world is going through a lot of turmoil”. He further added – “There is a geopolitical crisis in Europe, over 200 million people have gone below poverty line and 100 million people have lost their jobs due to Covid19.”

Apart from global issues, India will work towards promotion of digital public infrastructure, women’s growth and addressing challenges by leveraging technology. Along with active participation from its 50 states, the government is planning to finalize a G20 meeting on tourism in Jammu and Kashmir.

India’s Chief Coordinator for G20 Harsh Vardhan Shringla made a bold pitch for a new technology order that combines cross border flows of technology and investment. Addressing the GTS, he stated – “Our presidency will take forward efforts to create a holistic global health architecture that can respond better to future health crisis like the Covid pandemic”, perfectly aligning with India’s G20 theme ‘Vasudhaiva Kutumbakam’ meaning ‘One Earth, One Family, One Future’, announced by PM Modi prior to his Bali Visit.

In reference to the sidelined interests and concerns of the global south, Foreign Minister S. Jaishankar said – “The rise of India is deeply linked with the advancement of Indian technology and the country cannot remain agnostic to the developments in the sector that has acquired strong political connotation.”

As India’s G20 presidency is coming at a time of crisis and chaos, PM Modi has emphasized to work upon global pandemic, conflicts and economic uncertainty. Earlier this month, the PM unveiled the logo, theme and website of India’s G20 presidency via video conferencing. The lotus designed in the logo symbolizes India’s ancient heritage, faith and culture.

With the presidentship of the G20 summit next year, India is planning to hold 200 meetings in 32 different sectors in multiple locations across India beginning in December this year. With special guest invites to Bangladesh, Egypt, Mauritius, Netherlands, Nigeria, Oman, Singapore, Spain and UAE, India will host the G20 summit on September 9 and 10 in 2023 which will be one of the high-profile international gathering to be hosted by India.

India set to be the “rule maker” with G20 presidency
India to take over the presidency of the intergovernmen...