Organic food sector: On the cusp of expansion

Being home to 30% of world organic producers, India’s organic food sector has shown significant progress during 2017-20 with its production increasing at a CAGR of 19.05% while consumption increasing at a CAGR of 12%. Exports have also progressed over the past years owing to demand from the US and EU. However, the sector still has vast space to grow with ample opportunities arising during the current period of pandemic. 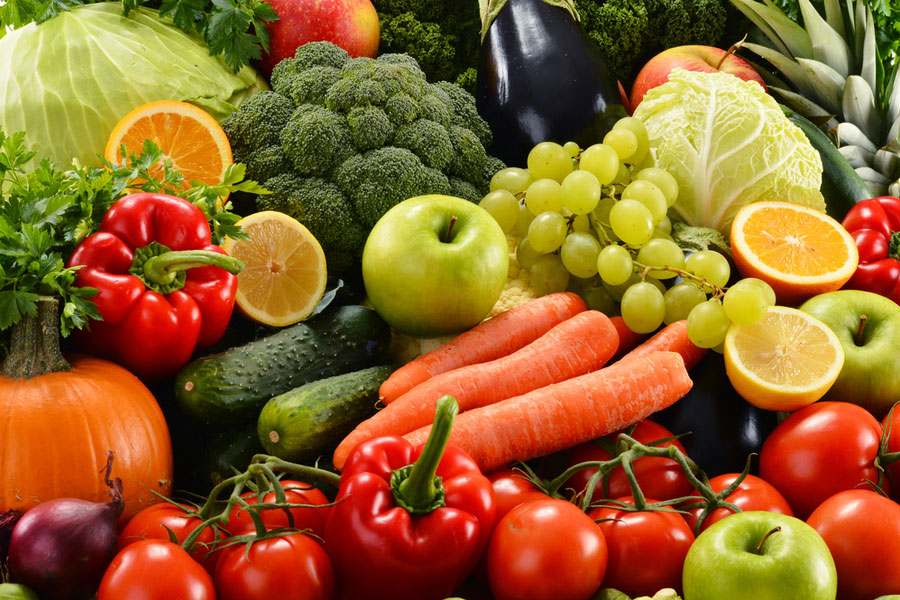 Organic food is a fast spreading concept across the globe, with people leaning more towards healthy habits. According to the International Federation of Organic Agriculture Movements (IFOAM), “Organic agriculture is a whole system approach based upon a set of processes resulting in a sustainable ecosystem, safe food, good nutrition, animal welfare and social justice.” Furthermore, as per the organisation, this form of agriculture stands on four principles namely, health, ecology, fairness and care, making farming more sustainable in future.

Source: FiBL and IFOAM- Organics International (2020), figures for the year 2018

Country wise, Australia has the largest area of land under organic farming, i.e., 35.59 million hectares of land. India ranks 9th with an area of 1.94 million hectares under organic farming. India stands out across the globe, being home to the largest number of organic producers (1.5 million), far more than Uganda, which has the second largest number of organic producers.

According to data from IFOAM, the organic sector has experienced tremendous growth over the years with sales crossing 97 billion euros in 2018, growing at a CAGR of 12.42% during 2013-18. The figure below shows countries which have largest organic markets during 2018 in which the United States (40.6 billion euros), Germany (10.9 billion euros) and France (9.1 billion euros) are leading. 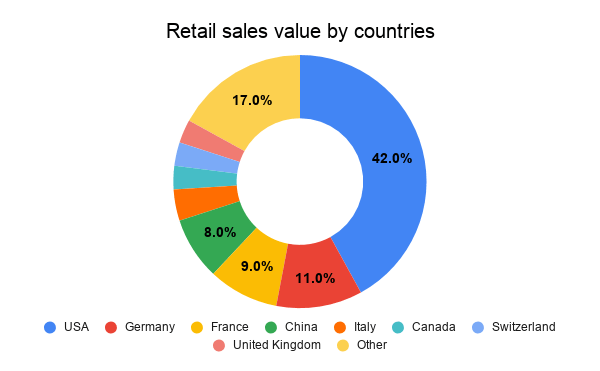 Being home to around 30% of the organic producers in the world, it would be interesting to have a look at the growth of the Indian organic food sector. The production data shows an increase in production in the country from 1.6 million MT to 2.7 million MT during 2017-20, a growth of 68%. However, the cultivation area has grown only by 2.8%, growing from 3.57 million hectares in 2017-18 to 3.67 million hectares in 2019-20. 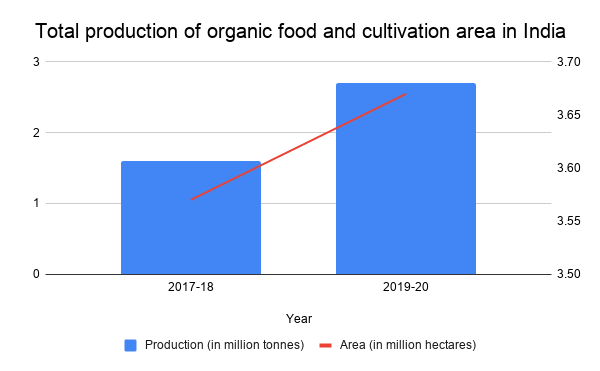 The growth in production has been significantly driven by the leading states i.e.., Madhya Pradesh, Maharashtra and Karnataka, which together account for 74% of the total organic production. A lot of success stories have emerged from these states with the farmers earning high profits. For instance, Hukumchand Patidar from Rajasthan was honoured with Padma Shri in 2018, as his efforts made the produce from his village Manipura, Jhalwar district famous in markets of Europe, Japan and Switzerland. Patidar, with his determination to produce without any artificial method, experimented various organic techniques including organic pesticide and extended the reach of his produce to domestic and international markets.

Another example is Rajendra Bhat from Maharashtra. Bhat, known in his farming community for his judicious use of land and water, successfully harvested more than 180 varieties of organic food on a 5 acre land which till then was highly infertile.

Government has taken many initiatives to support the sector as well. Organic farming policies in Madhya Pradesh have given a boost to the sector with many agriculture centres purchasing the produce, thus incentivising other farmers to produce organic food. Some of the initiatives by the central government for the purpose of promoting the sector have been National Mission for Sustainable Agriculture, Paramparagat Krishi Vikas Yojana and National Project on Organic farming. Sikkim has also stood out in organic farming, becoming the first fully organic state of India.

Trends in the exports

India’s export of organic food has increased significantly from 286 thousand MT in 2014-15 to 638 thousand MT in 2019-20, growing at a CAGR of 17.4%. In terms of value, the exports have amounted to US$ 689 million during 2019-20. The major importers which have driven the exports are US and Europe, which account for 86% of export demand of India’s organic food. Unilateral equivalency given by European Commission for unprocessed plant products and conformity assessment granted by USDA for organic products are considered as pivotal steps towards ensuring better market access. Other top destinations where India’s organic food is exported are Canada, Switzerland, Australia and Japan.

Processed food, oil seeds, cereals & millets, tea and spices are the leading exported organic food products in 2019-20. Some organic food products which have experienced significant increase in exports during the past five years are mentioned in the table below, illustrating a near vertical slope of growth for these products.

Other than the evident progress in the exports of certain products, the domestic demand for Indian organic food has also been on rise. This can be owed to factors like increased interest in health and wellness, rising purchasing power and rising share of educated young population. According to a report by USDA, the consumption of organic food in India has increased during 2017-20 at a CAGR of 12%, with consumption for organic packaged food and beverages estimated to be US$ 77 million during 2020. For organic packaged food, the consumption in 2020 is estimated to be US$ 11.8 million, while for beverages, it is US$ 65.1 million.

Despite being home to 1.5 million organic producers in the world and experiencing growth in the past years, there is still a lot of potential for India to improve. Only 1% of the total agricultural land in the country is organic land. The country is far behind the top 10 countries, which have more than 15% of their agriculture land as organic land. Furthermore, the exports of organic food from India are relatively low, with export value at US$ 754 million in 2018, while the leading exporters i.e., US and Italy exported US$ 3.5 billion and US$ 2.7 billion respectively.

An ICRIER study highlights some issues in the organic food sector that need to be addressed for the growth of the sector. It is essential for the producers and suppliers in the country to have effective supply chains. This is particularly true for hilly, tribal and remote areas, where the lack of proper infrastructure leads to spoilage and contamination of the food products.

Furthermore, it is required to ensure quality and uniform standards for organic products through appropriate regulations, as lack of uniform standards for domestic and imports leads to malpractices. Organic food products are premium in nature and get sold in the markets at higher prices than conventional products, given that the standards for production and labelling have been followed, implying its capability to raise farmers’ income. Furthermore, opportunities for the sector are ample during the current period of pandemic, as people are inclining more towards healthy food for boosting immunity.

this is an impressive progress.
Can any one respond to my query:

Enquiry for Organic food sector: On the cusp of expansion