The steel industry faced a volatile and rapidly changing market in the first half of 2022, with prices and supply changing hastily due to a variety of factors, including geopolitical conflict, raw material costs and supply chain constraints, apart from the imposition of export duty by the government. Nonetheless, the long term outlook for Indian steel remains stable. 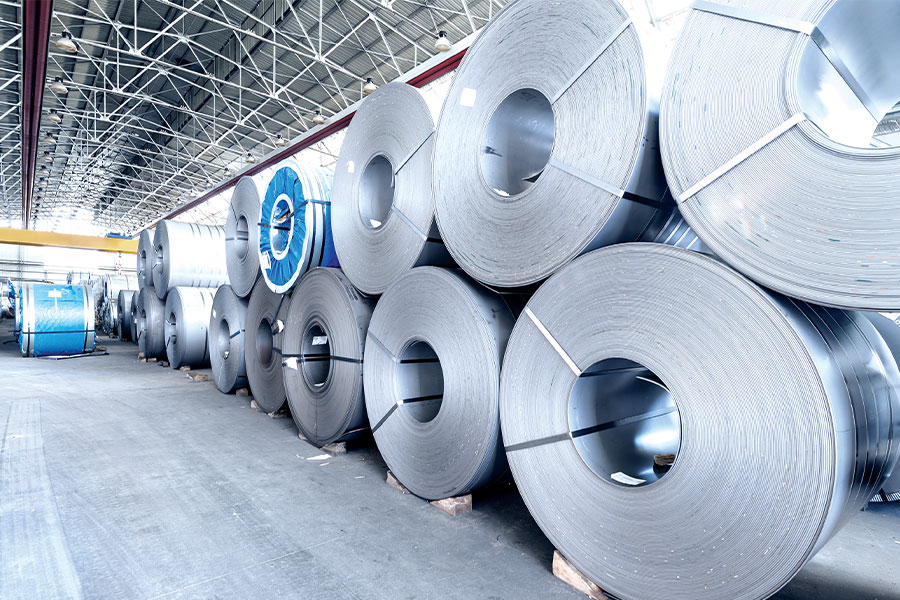 China is one of the world’s largest economies and the global leader in steel production. Currently, China’s economy is struggling following a series of COVID lockdowns in major cities such as Shanghai and Beijing. In April 2022, sentiment among manufacturing and services businesses fell to its lowest level since February 2020, as many businesses were forced to shut down operations to control the spread of COVID cases. China has stated it would enact policies for stimulating growth, including the acceleration of value-added tax refunds and monetary policy changes to encourage positive economic activity.

Europe, which has a major influence on the overall world economy, is experiencing inflation at an all-time high within the Eurozone. The gap between the highest and lowest inflation rates among countries using the Euro has also climbed up in April 2022, indicating economic instability within the region. The war between Russia and Ukraine has already impacted raw material prices and availability. It directly impacts steel supply and the materials used to produce steel. The world is watching closely how things will evolve in the second half of this year.

Growth is expected to return in 2023, but on the strong presumption that the war in Ukraine will come to a conclusion this year and we may see a recovery in market sentiment as we enter into the new year. 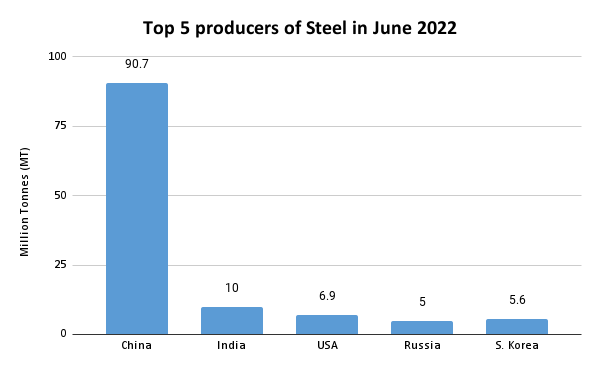 WSA has projected a highest steel demand in the Asia and Oceania region at 1313.1 million tonnes for 2022, whereas demand from Africa is estimated at 39.1 million tonnes, the lowest amongst all regions. The graph below shows the demand for steel in various regions as estimated by WSA for \2022. 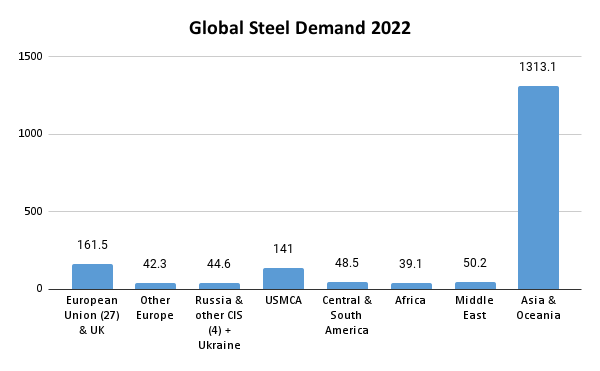 Steel production in India remained flat on a month-on-month basis in July 2022 at 9.97 mt, down 0.7% year-on-year, after the imposition of export duty on steel in May this year.

Exports of steel have been badly hit since the imposition of a 15% duty in May. A decline in export orders has been seen, consequent to the 15% export levy. Many mills have opted for production cuts in July to restore the supply-demand imbalance, especially in flat steel. Since May, the key markets of West Asia, Europe and Vietnam have seen less bookings for Indian Hot rolled Coil (HRC).

For the April to June quarter, exports declined 39%, year-on-year, falling by 60% in June. India’s finished steel exports fell by 75% y-o-y in July 2022 due to the combined impact of the duty levy, seasonal weakness in demand and global slowdown in the commodity cycle. This was the fourth straight month of fall in exports of Indian steel. Just 1,56,000 tonnes were exported in July.

The graph shows the trend in exports of Iron & Steel (HS Code 72) from India in the last six months, from January to June 2022. 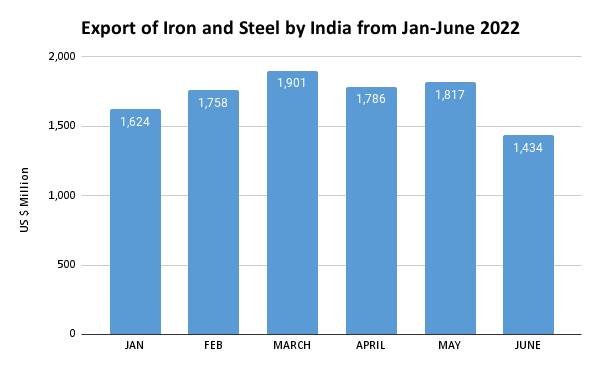 • Steel companies in India are expecting a significant margin correction in FY 2023 (ICRA).
• India’s finished steel exports are expected to decrease by 25% y-o-y in FY 2023. However export of semis is likely to increase by 40% yoy in the current fiscal.
• Indian steel mills have announced large scale expansion plans, which would lead to capacity increasing by 40 million tonnes per annum (MTPA) during 2022-2026.
• Global steel market is projected to post a CAGR of 4.1% to reach 2.2 billion MT by 2026.
• With expected investments in infrastructure, domestic steel demand is expected to increase at a CAGR of 10% till 2026.