Wheat is the most widely cultivated cereal in the world as both developing and developed countries are involved in wheat production. Yet, rattled by the Russia-Ukraine war, the world is currently facing the risk of a grave food crisis.

● Wheat is now the most widely cultivated cereal in the world, with a total planted area of over 220 million hectares, with China, India, Russia, US, Canada, France and Ukraine being its top producers.

●The global wheat prices are at historic highs because of factors like the supply chain disruptions caused by the Russian invasion of Ukraine, as the two countries jointly account for about 30% of global wheat exports.

● Despite being the second-largest producer of wheat India accounts for only a 0.47% share of global exports of wheat. One of the reasons for this is that WTO’s rules make it difficult for a country to export grains from the state owned stocks if they have been procured from farmers at fixed prices. Further, India has imposed a ban on wheat exports to tame domestic inflation and ensure food security for its people.

●  India, maintains on its part has taken this step towards regulation of wheat exports in order to ensure food security of India, its neighbours and vulnerable countries. 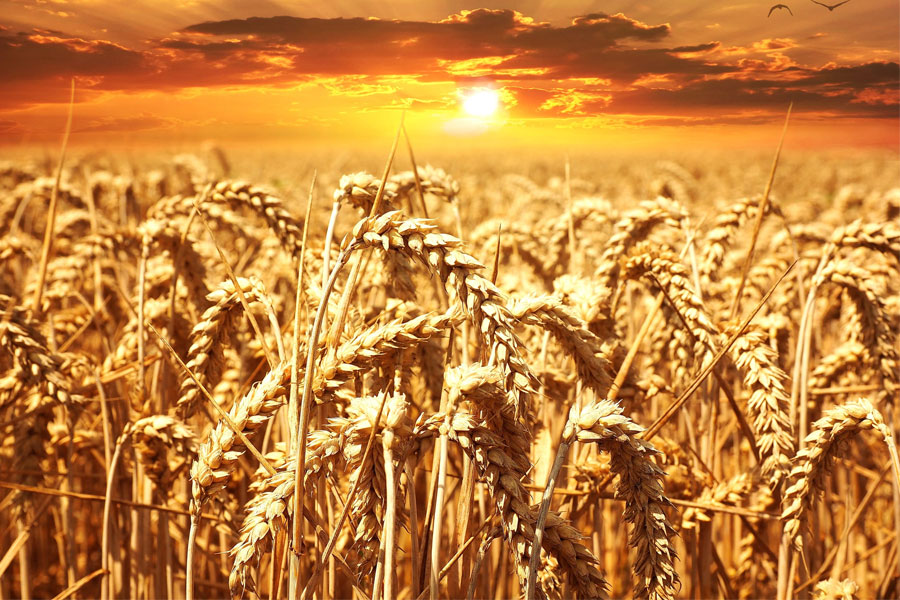 Wheat, which has a deep history in human civilization, has been one of the most important products in global trade. It is used as flour to make products including bread, pasta, cereal, pastries, cookies, crackers, muffins etc. Wheat provides more than 35% of the cereal calorie intake, while the protein content is about 13%. It is also an important source of carbohydrates. When eaten as a whole grain, it is a great source of dietary fibre. Wheat is used to produce starch, malt, dextrose, gluten, alcohol, and other products.

There are more than thousand varieties of wheat world over. The most important are common wheat (Triticum aestivum), durum wheat (T. durum), and club wheat (T. compactum). It requires a temperate climate with rainfall between 12 to 36 inches (30 to 90 cm) to grow. Wheat is cultivated as a cash crop, as it produces a good yield per unit area. It is now the most widely cultivated cereal in the world, with a total planted area of over 220 million hectares. Both developing and developed countries are involved in wheat production and the developing regions account for 53% of the total harvested area and 50% of the production.

Global producers and suppliers of wheat

Globally, higher temperatures, logistics challenges surfacing in the wake of the pandemic, and economic difficulties have led to food grain prices soaring in most countries. The global wheat prices are at historic highs because of factors like the supply chain disruptions caused by the Russian invasion of Ukraine, as the two countries jointly account for about 30% of global wheat exports. Ukraine’s exports are severely hampered because the war has forced it to close its ports, while Russia’s exports have been hit by Western sanctions. The shortage of wheat supply in the world is also due to the fact that other major wheat exporting countries Canada, the USA and Australia have also reported output issues related to wheat and that is also driving the global wheat prices to new record peaks, hitting poor consumers in Asia and Africa particularly hard.

That the demand for Indian wheat is increasing in the international market is corroborated by this fact that India ranks 10th in the export of wheat in the world (as per the table above). The top 15 countries importing Indian wheat include- Bangladesh, Nepal, UAE, Afghanistan, Sri Lanka, Qatar, Somalia, Malaysia, Bhutan, Jordan, Philippines, Korea, France, Oman and Uganda. It exported 8.2mt wheat, up from 2.6mt in 2020-21, as per the USDA.

Major importers of Indian wheat in the last 5 years 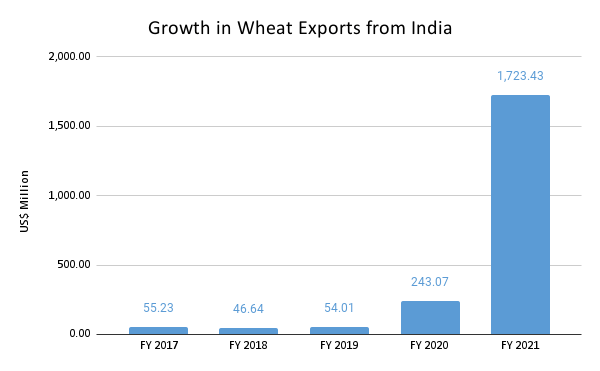 As per the estimates of the United States Department of Agriculture (USDA), India produced 109.6 metric tonne (mt) of wheat in FY 2021-22, registering an impressive growth of 3.6% in agricultural produce. Factors like good monsoon and various government measures to – enhance credit availability, improve investments, create market facilities, promote infrastructure development in the agriculture sector and increase provision of quality inputs to the sector made possible this significant growth. The introduction of Atma Nirbhar Bharat (ANB) Abhiyan coupled with other growth promoting schemes have further helped agriculture to achieve an improved growth.

The World Trade Organization’s (WTO) rules make it difficult for a country to export grains from the state owned stocks if they have been procured from farmers at fixed prices, which in India’s case, is the minimum support price mandated by the Centre. India and other developing countries purchase and stockpile food grains to be distributed to people in need. According to the multilateral trade body such stockholding practices are trade-distorting as they involve purchases from farmers at prices set by governments, such as India’s minimum support prices.

Then, there is the issue of farm subsidy. Currently, WTO in principle allows developing countries like India to provide farmers subsidies of up to 10% of the value of food production. Subsidies beyond the prescribed ceiling are considered to be trade-distorting. But India often exceeds this subsidy cap and has to invoke the peace clause. It then has to establish that the subsidies are not trade-distorting, a process that has led to numerous virulent negotiations at the WTO headquarters in Geneva. The amount of subsidy provided by India per farmer is far lesser than what is being provided in some developed countries. Thus, India has proposed either amending the formula to calculate the food subsidy cap of 10%, which is based on the reference price of 1986-88, or allowing such schemes outside the purview of the subsidy cap.

Another issue that is impacting wheat exports the intense heatwave in the country. India recorded the hottest May this year in the last 122 years, with the maximum temperature across the country rising to 33.1 degrees Celsius, nearly 1.86 degrees above normal. According to industry estimates, the output could fall to 105 million tonnes this year. Further, the Food Corporation of India has procured 38% lower wheat than the previous year, according to official data. This trickled down to an inflation in the country leading to the government imposing a ban on the private overseas sales of the grain. The global wheat prices surged after this decision. The Government of India however, has said it will still export to countries that request supplies “to meet their food security need”.

India is being requested by many wheat importing countries (including G7) to reconsider its decision (ban on Wheat-export) as soon as possible because the more countries step into export restrictions, the more others would be tempted to do so furthering the risk of food security crisis. Despite being the second-largest producer of wheat India accounts for only a 0.47% share of global exports of wheat. India, maintains on its part has taken this step towards regulation of wheat exports in order to ensure food security of India, its neighbours and vulnerable countries. It believes that there is instability in the world, and if India were to lift the ban, it would only help black marketers, hoarders and speculators. Neither will it help the really vulnerable people nor needy countries.

Enquiry for Wheat: The staple crop in unstable times