• The global market for pasta was valued at US$ 12 billion in 2018, and is expected to reach US$ 16.5 billion by 2023.
• Italy is the largest exporter of pasta in the world, while US is the largest importer of the product.
• Demand for pasta is fuelled by an increasing preference for healthy as well as ready-to-eat/easy-to-cook products amid chaotic lifestyles.
• However, the rising popularity of low-carbohydrate diets could negatively impact growth.

Pasta is an Italian dish which is common across the world owing to its expediency and health benefits. It can be prepared using an eclectic array of raw materials such as durum wheat, semolina, wheat flour, etc. It is available in various forms and flavours, which vary depending upon the tastes and preferences of a region. In recent years, the demand for pasta has been largely influenced by the young population, which opts for packaged, easy-to-prepare & ready- to-eat food products.

Top 10 exporters of pasta, in US$ million

Top 10 importers of pasta, in US$ million 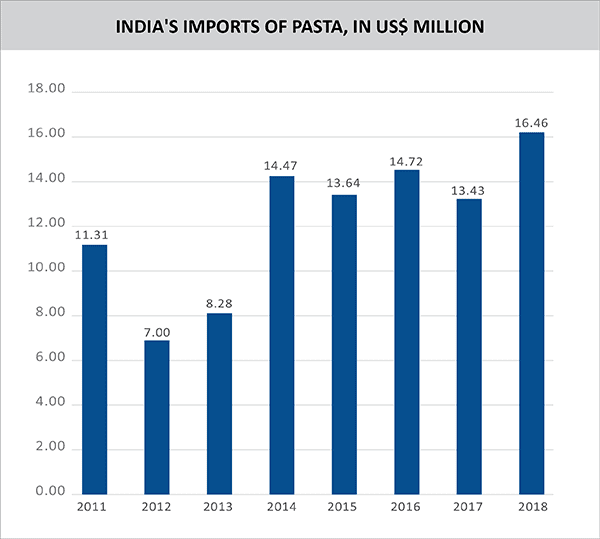 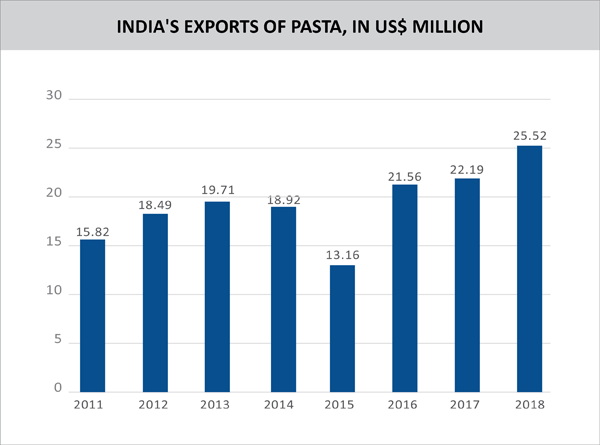 Exports of pasta from India surged at a CAGR of 11% during 2014 to 2018, and were valued at around US$ 26 million. The key nations that import India’s pasta or spaghetti are: Bangladesh, USA, Russia, Vietnam, Bhutan, South Africa, Sri Lanka, Saudi Arabia, and Nepal. On the other hand, India’s imports of pasta were recorded at US$ 16.46 million in 2018. Major sources of import for India in this product category are Italy, Turkey, Singapore, South Korea and Nepal.

The global pasta market is influenced by a number of favourable factors. On account of chaotic lifestyles, consumers are moving towards easy-to-make food products. Since it happens to be an expedient and healthy product, the demand for pasta, particularly for products such as vermicelli, fusilli and macaroni, has been on the rise.

Pasta is known to truncate the risk of high blood pressure and cardiovascular diseases as it has low-sodium and cholesterol content. Its high nutritional value and rich carbohydrate content have led to an escalation in the consumption of pasta among health-conscious consumers.

Apart from this, western influences have led to a shift in the eating habits of the consumers, particularly in the developing nations, which offers optimum opportunities for the global pasta market to flourish. Manufacturers are also offering a wide variety of pasta products, which cater to the changing tastes and preferences of the consumers. Additionally, various product innovations such as introduction of gluten-free, vegan and organic pasta have managed to attract a larger consumer-base. However, the rising popularity of low-carbohydrate diets can pose a threat to the market growth.