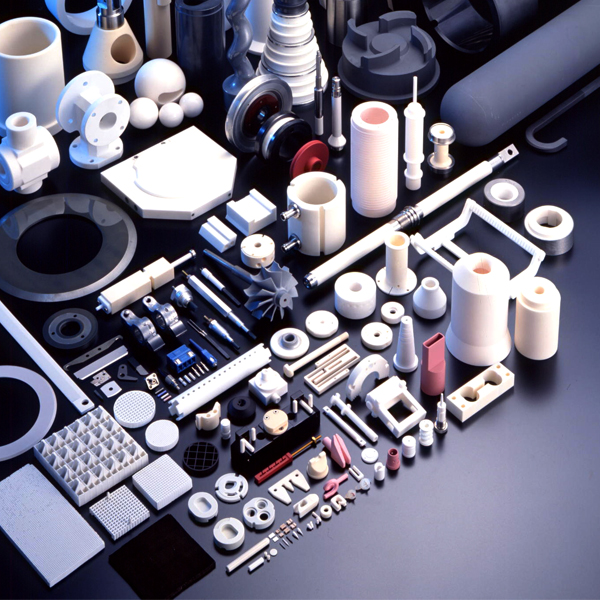 The Ceramics Industry in India is poised for sustained growth, powered by long term demand for construction. In India, the construction sector is expected to do well mainly due to the fiscal incentives given to the infrastructure development.

Ceramic products like crockery, sanitary ware, tiles etc. play a very important role in our daily life. This is because, apart from their decorative look, ceramic products are primarily hygiene products. This is also one of the chief reasons for their wide usage in bathrooms and kitchens in modern households to medical centres, laboratories, milk booths, schools, public conveniences, etc.
The ceramic industry has been modernising continuously by newer innovations in product design, quality etc.

• Major Exporters
United States of America was the largest ceramic exporter during 2017, with exports of US $20 billion. Germany, France and United Kingdom followed USA with annual exports of US$5.4 billion, US $3.7 billion and US $3.6 billion, respectively. The top ten countries together accounted for close to 61.7% of total ceramics exports last year.

• Major Importers
United States was also the world’s largest ceramic importer, with imports worth US $6.7 billion. USA rely heavily on imports of ceramic to meet its domestic ceramics consumption. This is also reflected in its high ceramics trade deficit of close to US $4.7 billion.
US is followed by Germany, France and United Kingdom with annual imports of US $3.2 billion, US$2.1 billion and US $1.7 billion, respectively.

• Trade Situation
The global ceramic industry has undergone a period of significant change over the years, driven by the demands of a globalised economy. While the traditional markets of Europe and the US continue to grow, primarily led by public sector investment, the most significant developments are however to be found in the emerging economies. They have, in recent years become the most significant players in the ceramic market, in terms of consumption, growth and investment.

One trend in the ceramic industry is the increasing use of the product in the medical applications. High-tech ceramics have been a significant part of modern medical devices; currently, they are used as acetabular cups and femoral heads for total hip replacement, restorations and dental implants, bone scaffolds and fillers for tissue engineering.

One of the major driver in the market is increased investment on the development of infrastructure. The global construction industry is growing rapidly with a major contribution from emerging countries. The revenue generation of the construction market is expected to reach approximately $15 trillion by 2025. The emerging countries accounts for 52% of the total construction industry and are estimated to contribute approximately 62.5% by 2025. The governments of these regions are investing significantly in residential homes owing to the rapid urbanization in lieu of jobs, better lifestyle, and other amenities.

Over the years, the Indian ceramic industry has been modernising through new innovations in product profile, quality and design to emerge as a modern, world-class industry, ready to take on global competition. The industry produces around 2.5% of the total global output presently. Gujarat accounts for around 70 % of the total ceramic production.

The ceramic products are produced both in organised as well as in unorganised sector. The share of organised sector in total production is around 55% and is characterised by the existence of a few large players. Small and medium enterprises (SMEs) account for more than 50% of the total market in India.

Over the last two decades, the technical ceramics segment has recorded an impressive growth propelled by the demand for high-alumina ceramics, cuttings tools and structural ceramics from the industry. Overall, the Indian ceramics industry has emerged as a major manufacturer and supplier in the global market. China was India’s main source of ceramics imports during 2017 with imports worth US $351.1 million followed by Germany and USA with imports worth US $44.1 million and US$24.3 million respectively. India’s top five import sources together accounted for close to 82% of India’s total ceramics imports. China alone accounted for 62.1% of India’s ceramic imports. 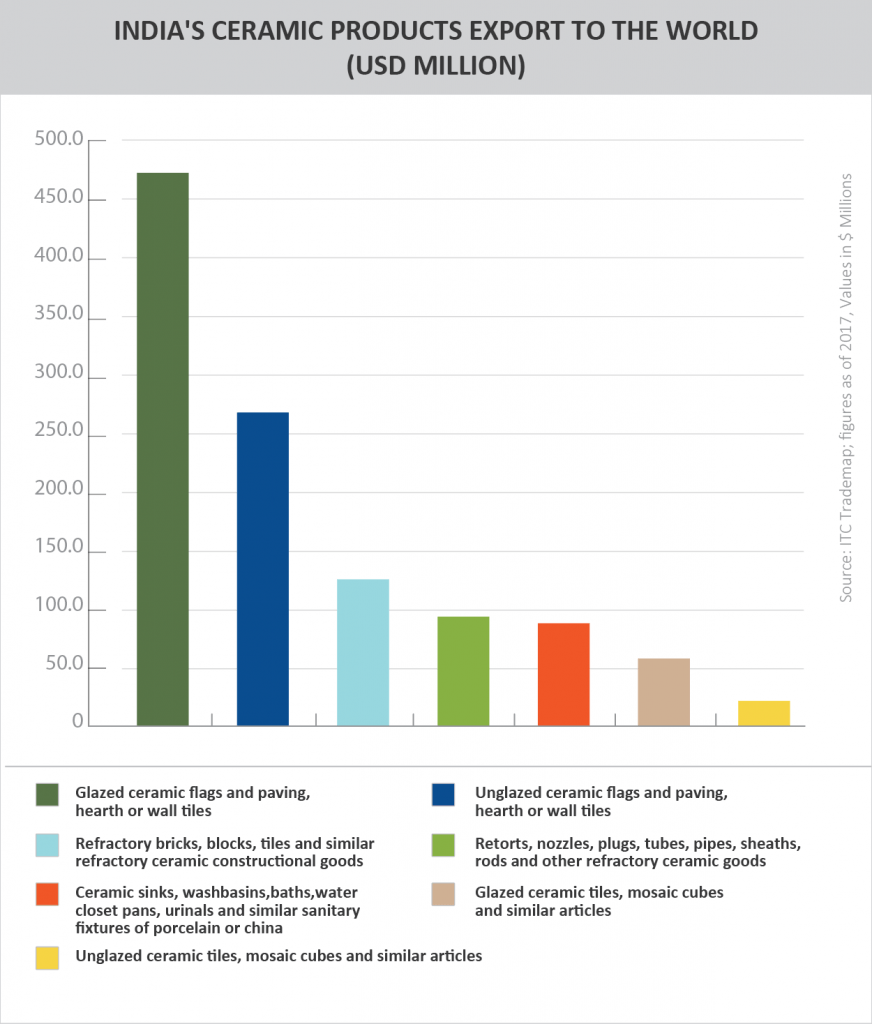 • Major Challenges
The ceramics industry is a highly energy intensive sector. One challenge in the market is high production cost. Petroleum and raw material products together form the most critical component in the production of the sector. The fluctuation in the cost of raw materials is affecting the supply of ceramic products in the market, which is posing a challenge to the ceramics market.

Consequently, there has been an increase in the regional requirement and supply of ceramics, which creates a demand imbalance. The fluctuation in the price of vital energy resources, such as atomic and crude oil, is affecting the manufacture of these materials, which hinders the growth of the market.

Also as per the Government rule, the industry has to pay an excise duty if it exceeds the stipulated turnover. This rule discourages the industry rather than promote growth and development.

The Ceramics Industry in India is poised for sustained growth, powered by long term demand for construction. In India, the construction sector is expected to do well mainly due to the fiscal incentives given to the infrastructure development. The industry offers a bright picture for existing players, as well as potential investors.

Also the global ceramics market is expected to grow at a CAGR of 6.91% during the period 2017-2021. In the next five to 10 years, Indian ceramic industry has the potential to become the number one in the world. The industry is looking to almost double its turnover by 2021, driven by rising domestic consumption and exports to the Middle-East, Europe and other newer destinations.

The Indian manufacturers are poised to compete with China in the global market, which is a lead exporter, by expanding product portfolio and scouting for new geographies. With the cost of production in China increasing, India with good quality minerals available would emerge as the top producer of finished ceramic goods. When compared to foreign products it would cost less by 30% and will be more durable.