• Guatemala has alleged that India’s sugar subsidies are not in line with WTO regulation.

• The Central American nation’s complaint comes after Australia and Brazil accused India of causing a glut in the sugarcane market with its subsidies.

• The Government of India has lent its support to sugar mills and farmers as oversupply has led to persistent liquidity woes in the sector.

• India asserts that its subsidies are in line with WTO norms, and exports are too insignificant to cause a glut.

Guatemala has initiated a complaint against India at the World Trade Organisation (WTO) Dispute Settlement Mechanism. In its complaint, the Central American nation has alleged that the sugar subsidies provided by India to its farmers are not in accordance with international trade regulations.

Domestic support measures cited in the complaint include the system of administered prices for sugar cane (through Fair and Remunerative Price); minimum selling price for sugar; and financial support like production subsidies to mills and subsidies to maintain buffer stocks. India also gives export subsidies to sugar mills on a minimum quota system, apart from subsidies for internal transport, freight, handling and other charges, according to the communication. It says that the product-specific domestic support for sugarcane in India is above the 10% de minimis level.

According to the rules under the dispute settlement mechanism of the WTO, Guatemala has sought consultations with India. If this consultative process does not result in a resolution, the complainant can ask for the setting up of a Dispute Settlement Mechanism.

India is the second largest producer of sugar in the world. Earlier, Brazil and Australia have also complained against India’s subsidies to sugar producers. They have purported that these subsidies have created a global glut, leading to a sharp drop in sugar prices.

According to the Brazilian trade ministry, India’s domestic support to farmers is possibly behind the drop in prices as well as production in the major production centres of Brazil, China and Thailand. Due to the drop in sugar prices, many Brazilian mills diverted sugarcane input to ethanol, thereby cutting down on their sugar production. The Brazilian government estimates that increase in supplies by India could cause a drop in global sugar prices by as much as 25.5% in the 2018-19 season, leading to losses up to US$ 1.3 billion for Brazilian exporters. Prices for New York-based raw sugar and London-based white sugar reached their lowest level in a decade at the end of 2018. EU, Thailand and Costa Rica also requested to be included in the consultations with India. 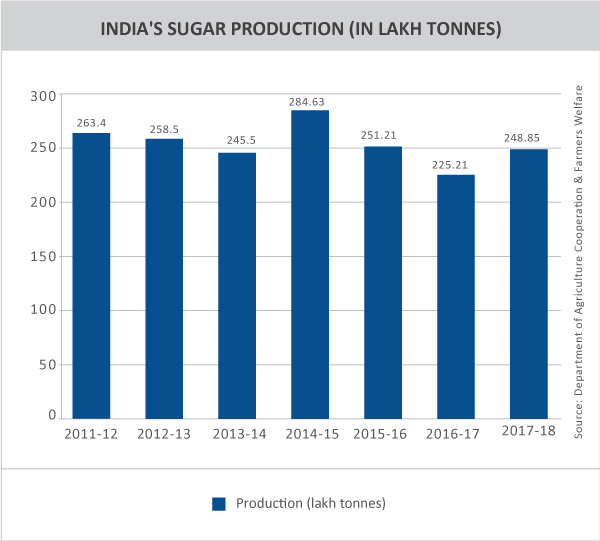 India’s sugar mills are facing persistent liquidity problems due to the dual impact of excess carryover stocks as well as excess production. This has led to a ballooning of pending dues to farmers as well. In October last year, the Cabinet Committee of Economic Affairs chaired by the Hon’ble Prime Minister Shri Narendra Modi approved a comprehensive assistance package of around Rs 5,500 crore to support sugar mills as well as farmers.

These measures included defraying expenditure towards internal transport, freight, handling and other charges as well as financial assistance @ of Rs. 13.88 per quintal of cane crushed in sugar season 2018-19 to offset the cost of cane. This initiative was taken to help sugar mills clear cane dues of farmers.

Pending dues of sugarcane farmers have exceeded Rs 20,000 crore till February of the current marketing year (October-September). The CCEA also approved a soft loan of Rs 15,500 crore earlier this month to raise ethanol capacity in sugar mills. Interest subvention of Rs 3,355 crore will be borne by the government. Apart from this, a soft loan of Rs 8,000-10,000 crore at a subsidized interest rate of 7-10% for one year has been approved for sugar mills, to be paid directly to the farmers. The government has also increased the benchmark price of sugar at the factory gate from Rs 2 to Rs 31 per kg, which is expected to improve the liquidity of millers by Rs 5,000 crore.

India also asserts that its exports of sugarcane are not significant enough to cause a glut in the global market, as is being alleged by other WTO members. In terms of volumes, India’s sugar exports were at around 2.14% of global exports in 2016. The Government of India has mandated a minimum export quota of 5 million tonnes for sugar mills in the current marketing year, out of which sugar mills had contracted to export 1.8-2 million tonnes as of February 2019.

Enquiry for India’s sweeteners for the sugar industry unfair?