Trade is also way lower than the potential, considering that India and Brazil are among the top ten economies of the world. However, as the two countries aggressively explore avenues to intensify business engagement, he admits that a major challenge is making private sector aware about opportunities in both countries. 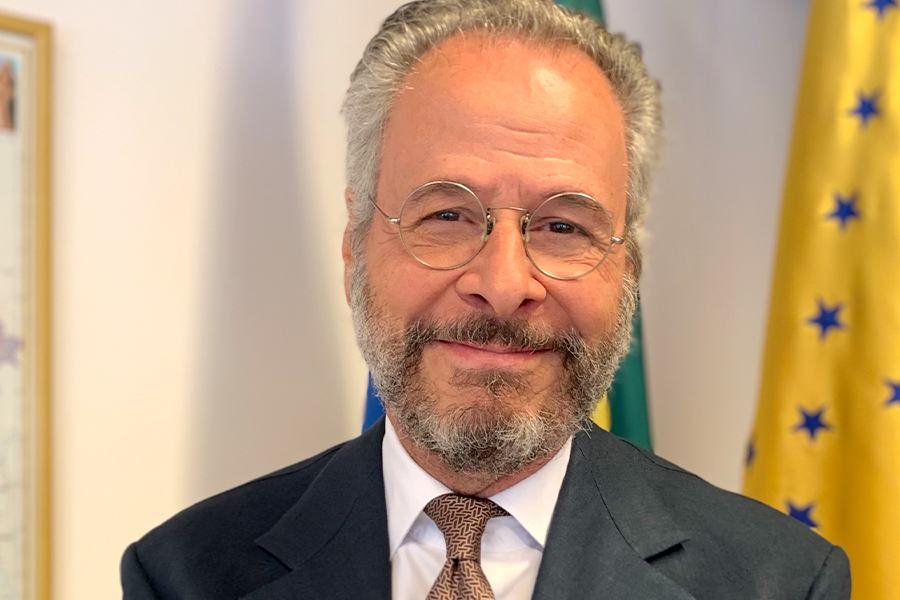 IBT: How has the COVID-19 crisis affected Brazil’s economy and trade? What are the industries that Brazil considers key to economic revival post-pandemic and why?

André Aranha Corrêa do Lago: Estimates for GDP, as expected, are still of a 5% contraction in 2020, approximately. The impact – less severe than that forecast for many G20 economies – would have been even greater, were it not for the countercyclical measures adopted by the Brazilian Government, including Emergency Aid cash transfers; federal transfers to local authorities for improvements in health services; the Emergency Credit Access Program and the National Support Program for Micro and Small Enterprises. These measures should mitigate the severity of the recession and preserve the financial integrity of businesses and families, setting a basis for recovery.

Brazil is facing two very clear short-term impacts from the COVID-19 crisis. First, an external demand shock caused by the slowdown in other countries. Second, an internal demand shock due to the impact on consumption, production and services. On a less negative note, agricultural exports have held up well over this period and should remain a reliable growth driver for our economy.

According to recent estimates, some industrial sectors are also on the path to recovery, such as construction, pharmaceuticals and electrical appliances. Retail commerce too has shown improving signs with the gradual easing of lockdowns.

The oil price slump naturally may harm Brazil as a net oil exporter. Resumption of sustained economic growth will also depend on the continuity of the reforms agenda with an emphasis on fiscal consolidation and improving resource allocation. Sustainable development is also a key priority, demonstrated by the recent approval of a new Bill on basic sanitation — with an extraordinary potential for unlocking public-private partnerships — and the continued development of our renewables sector, including sugarcane ethanol fuel.

IBT. How has the pandemic impacted Brazil’s approach to its trade relations with partner countries and outlook towards global value chains?

André Aranha Corrêa do Lago: Concerning international trade, in the 1st semester of 2020, we experienced a relatively small decrease of 6% in comparison with the same period in 2019. The size and competitiveness of the Brazilian agribusiness accounts for this relative resilience, which was particularly remarkable given that most countries faced significant reductions in exports caused by falling demand and logistics disruptions.

One of the main lessons of the pandemic has been the importance of ensuring a better-balanced production capacity in key areas such as pharmaceuticals and medical equipment. We have also seen that we need to integrate more deeply into global value chains, including in the health sector.

IBT: What are your views on the current level and potential of trade between India and Brazil? What are the major areas where you see potential of collaboration between the industries of the two countries?

André Aranha Corrêa do Lago: India is already a key partner in Asia and our trade ties have much potential for growth. Brazil and India have an important trade and investment relationship, but the figures remain shy considering the size of two of the ten largest economies in the world (5th and 9th). In 2019, Brazil’s exports to India stood at US$ 2.78 billion, while India’s exports to Brazil were recorded at US$ 4.26 billion.

Following President Jair Bolsonaro’s visit in January with an impressive official and business delegation, both governments committed to expanding bilateral trade to US$ 15 billion by 2022. In spite of the difficulties brought by the pandemic, we are pursuing this ambitious target by exploring the complementarities between our economies.

We are confident that the Indian economy will soon resume a growth trajectory. Brazil is keen to play a greater role in India’s development story by providing the products demanded by an expanding and affluent middle class, by benefiting from the globally competitive products developed by Indian business, particularly in the technology sector, and by engaging Indian innovators in partnerships to meet the challenges of our times.

Brazil has proven through the years – and most recently during the high point of the pandemic – that it is a reliable trading partner. We expect to play an increasing role in providing for high quality, diverse, nutritious and sustainable agricultural products that contribute to Indian food security. Furthermore, sparked by the President’s visit in January, we have also seen an increased interest for bilateral investment opportunities in electrical manufacturing, biofuels, aerospace, defence, pharmaceuticals, and information technology.

These are all areas where collaboration between both countries can result in excellent market opportunities for our businesses. One of our main challenges remains to raise the awareness of the private sectors to the emerging opportunities of each market. The Brazilian Government has been working with our Indian counterparts and business associations to address this, including by bringing the innovation agenda to the forefront of our bilateral relationship. The Memorandum of Understanding signed between the Brazilian Trade and Investment Promotion Agency (APEX Brazil) & Invest India in January is already bringing tangible results.

IBT: Distance is a major barrier to ease of trade between the two countries. What roadmap is being considered and worked on to revive it?

André Aranha Corrêa do Lago: While distance might be a challenge, it certainly is not a barrier to trade. For instance, Brazilian exports to Asia have increased significantly in the past decade with China – farther away than India – now our main trading partner. Increasing bilateral investment and supporting closer contacts between Brazilian and Indian businesses is one of the main ways to expand trade flows.

In order to create better conditions for trade and investments, our leaders signed two landmark agreements in January: an Investment Cooperation and Facilitation Treaty, which creates a legal framework to support reciprocal investments, and a Social Security Agreement, which supports professional mobility between both countries.

Both Brazil and India have dynamic and complex economies with competitive sectors that can benefit from stronger trade and investment links and from the reduction of tariffs and other trade barriers.

IBT: How has Brazilian investment in India trended over the years? What are the focus sectors for Brazilian companies planning to invest in India and investment modes they are likely to pursue?

André Aranha Corrêa do Lago: The Brazilian investments in India include sectors like public transport vehicles, IT, mining, energy, biofuels and defence products. Some of the Brazilian companies already in the country or planning to increase their presence in India are MarcoPolo (bus manufacturer), WEG (motors), Perto (banking automation), among others. There is also interest in partnerships in the defense industry by Brazilian companies such as CBC/Taurus. Due to the singularities of the Indian market, most of the Brazilian companies opt for the creation of joint ventures with local partners, but that does not avoid them to also make direct investments on their own, such as WEG and Perto.

IBT: In what ways can the India-MERCOSUR Preferential Trade Agreement be expanded in order to benefit both Brazil and India? What are the challenges to further expansion of the agreement?

André Aranha Corrêa do Lago: Over the last few years the Brazilian government has given a renewed focus on expanding trade agreements with large global economies and India is certainly a priority in this regard. The importance of expanding the India-Mercosur Preferential Trade Agreement was recognized by both Prime Minister Modi and President Bolsonaro in the January visit.

We are keenly aware of the potential for a far more encompassing coverage of products and tariff reduction in a more ambitious agreement. The main challenge has been the disruption brought upon by the pandemic. In any case, Brazil and our Mercosur partners continue to consult with India to move forward on this agenda.

IBT. What are the key product and service areas which could be lucrative for Indian companies (including startups) for investment in Brazil? What are the major advantages that Brazil offers these companies as an investment destination?

André Aranha Corrêa do Lago: Indian businesses have shown a strong interest in opportunities in agricultural, energy, IT, mining, pharmaceuticals and infrastructure sectors in Brazil, all of which offer a huge potential for growth and are complementary to needs of Indian businesses and economy. APEX Brazil & Invest India, as I mentioned, are working very closely to make sure we target the best sectors and identify the best opportunities.

India and Brazil are also home to many innovative tech startups – fintech, agritech, healthtech and edtech – who are increasingly exploring partnerships and business opportunities in each other’s country. Furthermore, as Indian businesses more and more look to diversify trading partners, we also expect to see a growing interest in Brazil from Indian companies looking for alternative suppliers of industrial components, such as in the automotive and steel sectors.

Brazil can also play a greater role in Indian companies’ global strategies as a local hub for Latin America and the Western Hemisphere. In this regard, our wide network of trade agreements with regional countries make Brazil a very attractive destination for Indian investors.

As a diplomat, since 1983, H.E. Mr. André Aranha Corrêa do Lago has held functions in Brasília in areas such as Trade Promotion, International Organizations, Protocol, Sustainable Development, Energy and Climate Change. Following are the prominent roles and responsibilities he has fulfilled throughout his career:

When someone writes an post he/she maintains the idea of a user in his/her mind that how a user can know it.

So that’s why this article is outstdanding.
Thanks!

Enquiry for Despite COVID, India & Brazil are pursuing US$ 15 bn trade target by 2022