From ‘work-wear to ‘casual-wear and then becoming a ‘fashion icon’, the journey of denim is quite fascinating. However, for a fabric that is expected to remain ‘evergreen’ in the fashion industry, denim has a huge ecological footprint. As one of the world’s leading producers, it is imperative for India to develop new technologies to balance its growth ambitions in denim manufacturing with the need to maintain a positive environmental footprint. 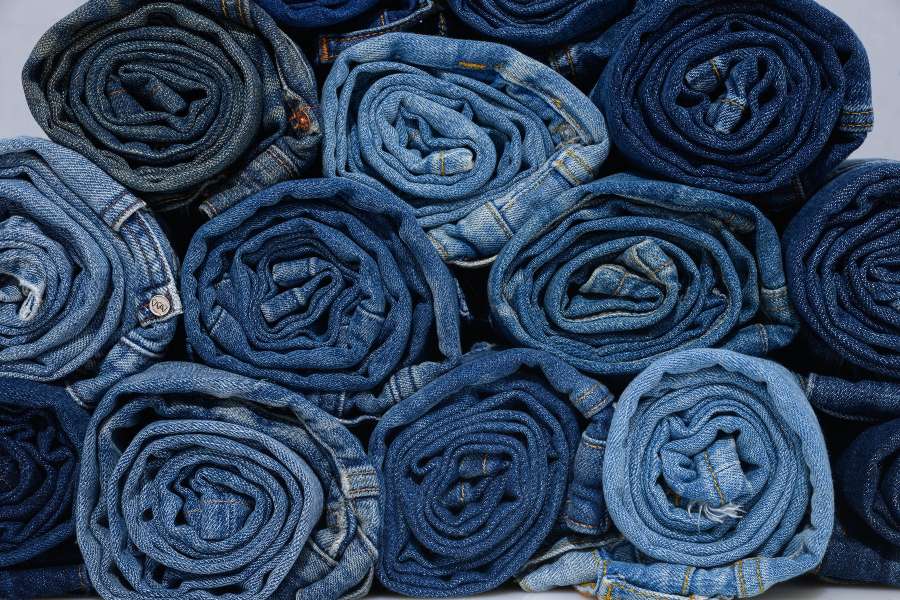 Serge de Nimes or denim made of 100% twill cotton fabric, originated from the world’s fashion capital, France, is one of the world’s oldest fabrics. A robust yet natural and highly breathable piece of attire, it is extremely resistant to abrasions and tears, making denim the first choice for the utility uniform, workwear, and dungarees. Today it has become an essential wardrobe staple, as it provides comfort and has a longer life span compared to other apparel.

Denim: From necessity to a fashion statement

From ‘work-wear to ‘casual-wear and then becoming a ‘fashion icon’, the journey of this twirled fabric is quite fascinating. In the fourth quarter of the 19th Century, the wife of a labourer in the United States approached a tailor, Jacob, to make a pair of pants for her husband that would not fall apart. To strengthen the trousers, he placed metal rivets on the points of strain.

Those who had been doing hard and intense work instantly accepted the sturdy riveted pants as their work-wear. It was in this historic moment that a category of clothing made with denim, with the alliance of Jacob, the tailor and Levi Strauss, the fabrics merchant, started one of the most significant clothing trends in the world.

Today, more than 15 billion meters of denim is produced globally every year, and about 10 billion different clothing items viz. jeans, hats, jackets, shorts, skirts, dresses, sneakers, shoes, belts, handbags, wallets, face masks etc. are manufactured all over the world. With technological advancement and innovations, denim and markets of its finished products have constantly been growing steadily.

It is interesting to note that the denim fabric and one of its finished products – ‘pair of jeans’ – was invented, produced and modernized in France, Italy and the USA. However, during the last few decades, the production of denim and its products has shifted from developed countries to developing countries or Third World Countries. Currently, China, India, Mexico, Bangladesh, Turkey, Pakistan, and Brazil are the major countries producing the largest volumes of denim every year not only to meet domestic demand but also to cater to markets of developed countries.

Denim: Draining resources out of the ‘blue’

A popular and widely accepted product that probably will not go out of fashion in the near future, denim is expected to remain the first choice of not only the present day consumers but also generations to come. Then why the shift in production from developed countries? Developed countries are well aware of the harmful effects of denim manufacturing on the environment, and this is possibly a key reason for outsourcing to developing and third-world countries.

The three processes of producing denim and its products, from cultivation of cotton to dyeing and then texturizing the finished products, not only severely affect the country’s water resources, including ‘clean water sources’ but also leave harmful effects on the environment. From cultivation to production, a pair of jeans uses about 7,600 liters of water, making the denim industry one of the most water-intensive industries in the world.

Further, the indiscriminate use of chemical pesticides to grow bumper crops in the farmland contaminates the soil and water sources. More so, the process completes only when denim goes through several harmful chemical washing processes and ‘acid-wash’ is sprayed over the fabric. The process of dyeing and acid culminates into dumping of the toxic waste into rivers and other water resources.

Blue indigo is the hallmark of Denim. Initially, the plant-based indigo dye was used for dyeing the Denim fabric. Indigo is a valuable plant available in Egypt, Greece, Italy, China, and India. Later the chemical indigo dye, which is cheap and easier to manufacture but more harmful to the environment and the workers, substituted the plant dye. The other method that is injurious to workers and damaging to the environment is ‘sandblasting’ that involves spraying fine sand through an airgun with high pressure to design the ‘old worn out look’.

Another reason is that it is highly unlikely that despite having the largest consumer market for denim, producers and manufacturers in developed countries could use unethical strategies to compete with developing or third world countries. On the other hand, they show a lot of concern for the environment in their countries, but simultaneously do not empathize with environmental and climate pollution in other countries, particularly the third world countries. Therefore, it is a better option for them to outsource denim production to developing countries.

The mass-producing countries are also aware of the harmful effects of the Denim industry on the environment, but they are not as cognizant about the ecological balance. In reality, more or less all industries affect the ecosystem. Nevertheless, these countries need their industries to grow to help their citizens to be financially stable and contribute to the country’s economy. Big brands too have outsourced their products to developing countries, and a majority of the manufacturers and producers in developing countries have collaborations with these industry leaders. Painfully, the high cost of the branded denim is not at all helpful to the conditions of local farmers and workers in developing countries as they do not get even a small percentage of the high cost of branded products.

The growing demand for cotton itself is a threat to habitat and agricultural land. Since cotton farmers are already at the bottom of the supply chains, they are forced to use destructive farming methods to survive. On the other hand, to meet the ever-increasing demand for this popular fast-changing fashion product and to survive the tough market competition, manufacturers use cheap and substandard quality denim by blending polyester and other acrylics to produce low-cost products. These man-made crude-oil by-products release microfiber plastics in the environment which are impossible to dispose of. Cheap unnatural materials produced through poor agriculture practices and toxic chemicals mixed with the water sources end up in the food chains.

Denim originated in the 19th Century, but it entered into Indian market only in the early 80s, and was immensely popularized in the next decades. Since then the denim industry in India, the third-largest exporter after China & Pakistan, is thriving, with exports of US$ 341.7 million in 2020. It has huge potential in terms of both consumer market as well as a manufacturing hub. India, the world’s largest producer of cotton, has yet to exploit its true potential despite showing remarkable progress in recent years.

India also enjoys a competitive edge over other countries because of skilled labour, low cost of labour, mass production capacity, etc. Denim is a very important product of the Indian textile export basket and with the help of the government; the industry is making efforts to increase the production capacity.

The future of the Denim industry in India though seems bright it largely depends on how the huge potential is tapped in smaller cities/towns, where fashion awareness is on the rise because of digital marketing and publicity. In these cities, players from the unorganized sector have captured a major market share by launching imitations of new fashion designs of branded products at cheap prices. However, the liking of new generations for branded products, their interest, and increased purchasing power are helping luxury brands to penetrate the markets of smaller cities.

Ever since environmental issues are raised, the preference of luxury brands and consumers in developed countries is switching more towards eco-friendly products. Italy, known for quality premium denim and its products, regularly strives to produce eco-friendly sustainable fibres and eco dyes for producing ‘green Denim’ products.

However, as consumers and governments all over the world become more conscious about the huge ecological footprint of the fabric, Indian denim manufacturers will start looking for sustainably produced denim.

A number of brands in the country have, therefore, started upcycling denim fabric to reduce its ecological footprint. While refraining from using coloured and bleached denim fabric, some of them use natural dyes and smaller vats, while others use yarn spun out of the denim waste leftover during jeans manufacturing and using the technique of foam dying to impart colour to the fabric in lieu of water.

Other eco-friendly steps are the use of cold dyeing; and e-flow technology, where nanobubbles (really tiny bubbles) and ozone are used to soften the material and lasers are used to add streaks and fading lines to the denim fabric, instead of harmful bleaches.

To help the Indian denim industry, regulators need to modify policies to offer some benefits to the sector. The industry needs massive investment for technological upgradation for R&D to produce high quality, sustainable, eco-friendly or ‘green denim’, a new concept in developed markets. Environmental policies forcing the industry to use plant-based dyes may save the environment, but, use of more such methods makes the products more expensive. This might put India out of competition. It is imperative to develop new technologies in manufacturing for India to maintain the environmental footprint as well as increase production of Denim products.

I never knew about the consumption water so high in the production of a pair of jeans. This article is an eye opener and this article higlighted the impact on environment

Enquiry for Denim: Green predicament of the evergreen fabric