India has emerged the largest exporter of cumin seeds globally in the past few years, accounting for 75% of world exports. Boosting exports further would require capping of domestic prices and educating farmers in better cultivation methods. 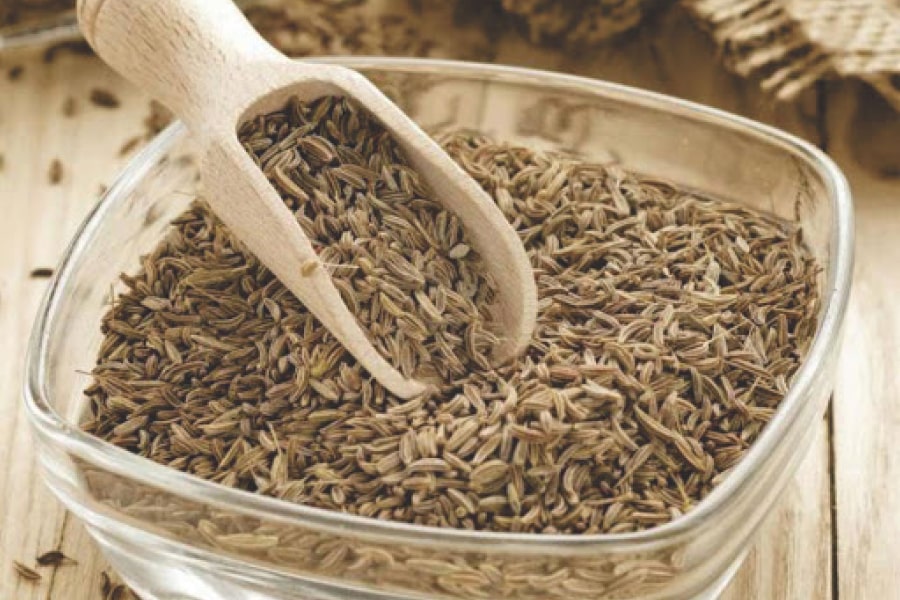 Cumin seed, commonly known as Jeera in India, is a member of the Apiaceae family. With its origin in Egypt and the Middle East, the product is a well-known name in Indian kitchens. It is also well regarded for numerous health benefits like addressing digestion problems, boosting immunity, controlling blood sugar, and many more. Due to its many uses, the product has significant demand worldwide. Top importers of cumin seeds across the globe are China, Bangladesh, US, Egypt, UAE, and Saudi Arabia; together accounting for more than half of the import demand for the seeds in 2019.

Industry insiders reveal that China is importing vast quantities of cumin seeds for value addition and possibly even re-exports. Another possible factor is increased seafood consumption in China, which is expected to lead to an additional demand of 6-18 million tons of seafood. China lowered tariffs on a total of 8,549 products for India and other 4 Asian countries under the Asia-Pacific Trade Agreement (APTA). The products included medical products, agricultural, chemicals, and, clothing, steel, and aluminum products. Currently, China imposes a 7.5% tariff on the APTA member countries, while the MFN tariff rate imposed by China is 15%.

India is the largest exporter of cumin seeds with a share of 75% in 2019. Furthermore, since 2011, India has experienced a significant increase of 30.4 percentage points in its share, growing at a CAGR of 6.75%. This has been in part due to the fall in share of other top exporters. Some other countries with a significant share in the world’s export of cumin seeds are Syria (4.7%), Afghanistan (4.5%), UAE (3.3%), and Turkey (2.1%). The top destinations for Indian cumin seeds are China, Bangladesh, and the US, together accounting for a share of 41.9% in India’s exports. Export to China has increased from US$ 0.26 million in 2015 to US$ 106.17 million in 2019. Similarly, exports to Bangladesh and the US have also increased at CAGRs of 65.5% and 7.8% respectively, further implying increased demand for Indian cumin seeds in the world market. A look at the production trend

Source: Spices Board of India

In 2020, exports of Indian cumin seeds experienced contraction due to the Covid-19 pandemic. During March-May 2020, the YoY growth was negative owing to the fall in exports to major destinations including China, Bangladesh, and the US. However, the benefits of cumin in terms of improving immunity have helped in boosting its exports since then. Exports of cumin seeds grew by around 33% YoY during June-November, 2020.

Need for a further boost

Despite being the world’s largest exporter of cumin seeds, India exports a significantly small portion of its production. One reason for this is the high domestic consumption of cumin seeds, which is 75% of the total production in India. Another factor responsible is high domestic prices which overshadow the export incentives. As per Yashodhan Shah, MD at Virdhara International, exporters realise a lower margin in exports of cumin seeds in comparison to the domestic market. Domestic prices fluctuate in response to conditions like heavy monsoon during the season of the harvest, which affects the quality of output and raises the prices. 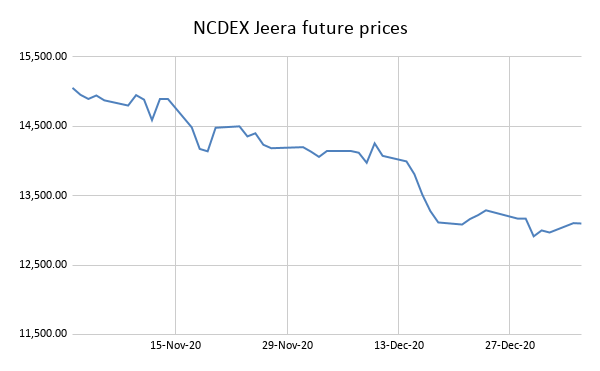 The NCDEX future index for March 2021 expiry in the above graph shows that the future prices for the cumin seeds would be stable in India with the prices remaining between Rs. 13,000 a quintal and Rs.13,500 a quintal since 21 December 2020. Before that, the prices had been declining. To promote exports of cumin seeds, it is required to put an adequate cap on domestic prices. Furthermore, education of farmers and better cultivation methods would also contribute to export growth.

Enquiry for Cumin seeds exports: Sailing with the tide