US sanctions on Iran: Turm‘oil’ yet again for India

• The US has decided against extending waivers on imports of Iranian oil after May 2, 2019.
• Unless US changes this decision, India, China, Turkey, Japan and South Korea will now have to stop importing oil from Iran or face US sanctions.
• Even though India has been hedging its exposure over the past few months, an immediate and complete replacement of oil imports from Iran will be challenging.
• The scenario highlights the perils of India’s overdependence on oil imports once more, which can only get worse if not addressed in a timely manner.

After walking out of the Iran nuclear deal last year, the US had announced a 180-day waiver to eight countries importing oil from Iran in November 2018, allowing them time to seek other sources of oil. Three countries have complied totally so far – Greece, Italy and Taiwan; leaving India, China, Turkey, Japan and South Korea.

The US Secretary of State Mr Mike Pompeo has now announced that there will be no further extension of the waiver after the 180-day window closes on May 2. In a statement released on April 22, Mike affirmed, “Today we are announcing the United States will not issue any additional Significant Reduction Exceptions [SREs] to existing importers of Iranian oil… We will continue to apply maximum pressure on the Iranian regime until its leaders change their destructive behaviour, respect the rights of the Iranian people, and return to the negotiating table.” Furthermore, Mr Pompeo has cautioned all nations against any kind of trade relations with Iran, as the “risks are simply not going to be worth the benefits”.

So unless they want to invite sanctions, these five countries will have to stop importing oil soon. While Japan and South Korea are not so highly dependent, China and India are the largest importers of Iranian oil. The announcement raised the price of global benchmark crude oil to a six-month high during intra-day trade on April 22.

The US also sought to assure that Saudi Arabia, UAE and other members of the OPEC will make up for the shortfall caused by the end of the exemption period. US President Donald Trump tweeted:

Saudi Arabia and others in OPEC will more than make up the Oil Flow difference in our now Full Sanctions on Iranian Oil. Iran is being given VERY BAD advice by @JohnKerry and people who helped him lead the U.S. into the very bad Iran Nuclear Deal. Big violation of Logan Act?

US wants Iran to come back to the table and renegotiate the nuclear deal, but Iran isn’t budging to the pressure so far. Iran earns around US$ 50 billion from oil sales, which is around 40% of its government’s revenues. The planned sanctions aim to inflict severe damage on the Iranian economy and weaken its government.

Alireza Tangsiri, head of Iran’s Revolutionary Guard Corps navy force, has threatened that Iran will close the Strait of Hormuz, which carries one-fifth of the world’s oil trade. Some countries have rightly pointed out the unfairness of such unilateral sanctions by US aimed at forcefully redefining their relations with Iran to serve its own interests. Turkey’s Foreign Minister Mevlut Cavusoglu, commented, “We don’t accept unilateral sanctions and impositions on how we will maintain ties with our neighbors.” China has also opposed unilateral sanctions, with Foreign Ministry spokesman Geng Shuang asserting, “China’s cooperation with Iran is open, transparent, reasonable and legitimate, and should be respected.”

Iran’s oil exports have already come down from 2.5 million bpd in April 2018 to 1 million bpd in March 2019. Notably, US has increased its own production last year by 1.6 million bpd over 2017 and expects to increase it by a further 1.5 million bpd in 2019. So the US will naturally leverage the opportunity to bring its surplus supply to the international market.

How India should cope

India is also successively reducing its oil imports from Iran over the past few months. According to company reports, Indian Oil Corporation Ltd (IOCL), which is the largest refiner in India and largest buyer of Iranian oil has been leveraging alternate suppliers since 2018 to cushion itself from the impact of the sanctions. India’s petroleum ministry released the following statement on the announcement, “The Government of India has put in place a robust plan to ensure that there is adequate supply of crude oil to Indian oil refineries from May 2019 onwards. There will be additional supplies from other major oil producing countries from different parts of the world.”

Last November, India used escrow accounts of five Iranian banks that were held by UCO Bank Ltd to deposit money for oil imports from Iran in rupees. This money would be used by Iran to meet the expenses of its diplomatic missions in India and also purchase essential products from India. The payment system was also relaxed to accommodate basmati rice exports, for which Iran is India’s largest export market. Exports of basmati rice to Iran were recorded at US$ 1.15 billion during April-January 2018-19.

India imports around 80% of its oil requirements, and is therefore extremely vulnerable to volatile swings in global oil prices. India’s imports of crude oil (HS Code 2709) from Iran were valued at US$ 10.93 billion during April-January, 2018-19, growing by 21.7% over the entire fiscal year 2017-18. Iran accounted for a significant 11.25% of India’s imports by value during the period. Iran has given India more favourable credit terms of 60 days, lower prices and the benefit of rupee trade, making complete replacement of Iranian oil a difficult proposition for India. Venezuela is another major supplier to India with imports of oil valued at US$ 6.23 billion in April-January, 2018-19, but state-owned Petrуleos de Venezuela SA is also facing US sanctions. 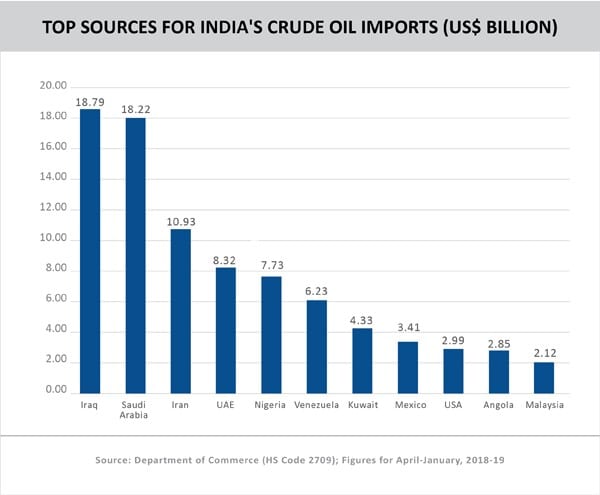 Moreover, the likely increase in international prices makes it even tougher. Every dollar increase in crude prices raises India’s oil import costs by Rs 10,700 crore per annum, according to estimates. Crude oil imports during April-January 2018-19 reached US$ 97.21 billion, compared to US$ 87.37 billion for the entire fiscal year 2017-18.

The decision by the US also coincides with the supply cuts being made by OPEC nations since the beginning of the year. While Saudi Arabia may have the capacity to replace Iran’s supplies completely, it may be hard to mitigate the supply risk from Venezuela and Libya. Saudi Arabia is not expected to embark on a production increase immediately. It had increased production by a million barrels a day between April and November 2018 at the behest of the US after the latter pulled out of the Iran nuclear deal. However, US unexpectedly announced the sanction waivers, which may compel Saudi Arabia to adopt a once bitten, twice shy approach. Moreover, Saudi Arabia has to consider its commitments to its OPEC partners before deciding on its approach. 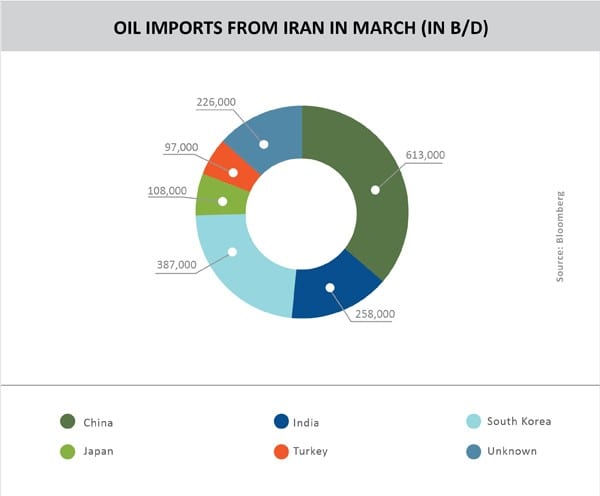 This complicated geopolitical situation highlights the costs of India’s unsustainable dependence on oil imports once again. Hydrocarbon exports are expected to reach US$ 300-500 billion per annum by 2030. India needs to look at further diversification of its oil import basket, and secure other options like rupee trading and barters with oil exporting countries to the extent possible. It is equally critical for India to migrate to alternate sources of fuel and improve its domestic production/refining capacity in the long run. It is notable that India is estimated to have proven reserves of 206 billion barrels of oil, out of which only 67 billion barrels have been successfully recovered.

Enquiry for US sanctions on Iran: Turm‘oil’ yet again for India