• India’s reticence towards trade openness and laying down of tough last-minute conditions have been blamed for the current impasse at RCEP. Moreover, Indian companies are also criticised for being too inward-looking and paying inadequate attention to exports.
• However, this criticism of Indian companies ignores the specific dynamics of the country’s business ecosystem; characterised by the dominance of MSMEs, impressive improvements in ease of doing business and a huge domestic consumer base of 1.32 billion, which is nearly 17.1% of the world population.
• As statistics of the last five years confirm, India’s overall growth has been heavily driven by domestic demand, which resulted in double digit growth of Indian imports but only 4-5% growth in exports.
• There is a need to bridge the opportunity gap between the domestic and export markets through facilitation in areas like quality standards, scale, R&D and branding. 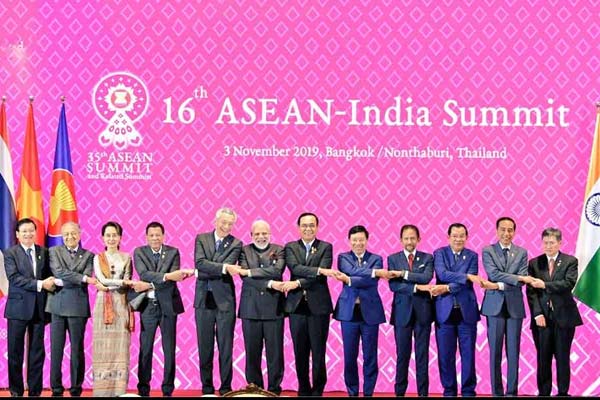 Over the weekend full of hectic parleys with RCEP members in Bangkok, India has been fiercely negotiating on issues of its interest, which include the trade deficit with China and greater mobility for Indian workers in RCEP nations. India has been accused of stalling the deal with last-minute demands, and being overtly protectionist in its stance.

Even back home, opinion is sharply divided on whether or not India should be a part of this bloc. Those against the deal point to the obvious negative repercussions for India’s businesses with an influx of cheap imports. But those favouring the deal feel that Indian firms should not fear competition and take the opportunity to connect to regional value chains and markets.

There are obvious and genuine expectations from policy makers and government bodies that Indian exporters should take their businesses to the next level by catering to more global markets and diversifying their exports basket. Of course, a continuous and significant surge in exports makes the position of an economy relatively robust on global platforms in terms of its bargaining and negotiating power. For example, going by their export capabilities, Germany or USA will have more say at any given international forum like WTO than Peru, Ghana or Uruguay. Thus, emphasizing and strategizing on export promotion in the policy framework is quite justifiable.

The Indian government does provide various incentives for the same like duty drawback, zero import duty on intermediate goods for exporting finished or through Merchandise Export Incentive Scheme (MEIS). But, the argument here is, “Is expecting exporters of India to aggressively focus and explore global markets pragmatic or entirely justified?”

With the consumer base of 1.32 billion accounting for nearly 17.1% of the world population, India offers huge opportunity to the business community. At the same time, it is also true that exports have a cost component attached. Exporting can be risky business as well. Operating in an unfamiliar or less familiar foreign market will always bring up novel challenges, while establishing a business in the domestic market will be relatively low hanging fruit. The critical difference between success and failure when doing business overseas is having symmetric information about the overseas market and ability to assess the risk. There will always be risks when entering a new market, but identifying those risks ahead of time and putting measures in place to manage them can help to minimise their impact on your success. But the risks get all the more daunting for MSMEs, which dominate India’s business landscape.

According to the World Bank, Indian domestic market and industries have experienced perpetual improvement in ease of doing business as the government has implemented many liberalized policies in recent times. In the last five years, India’s overall growth was “too much” driven by domestic demand, which resulted in double-digit growth of Indian imports but only 4-5% growth in exports (recent quarters of tepid consumption are therefore an aberration). If this is the case, would it be reasonable to expect Indian exporters to bear risk, cost and uncertainty and aggressively focus on exporting their products?

It might not be considered as a good sign. For an exporter, the international market is always a better place to explore. Someone who has focused only on the global market will never be happy supplying merchandise goods in the domestic market.  However, given the complex interplay of factors in the international market, including economic headwinds, trading blocs and NTBs, going global requires a more sustained approach.

If we observe the growth rate of major sectors in India, it will be cogent to see the predilection of Indian exporters towards domestic market. On the other hand, global imports only surged by 1% per annum in last seven years. This is signalling the paucity of opportunity for Indian exporters, maybe due to protectionist policies getting implementing globally. WTO has already forecasted that in 2020, world trade will grow less than 2% per annum.

So, for realizing the promising opportunities provided by Indian domestic market, our exporter seems inclined towards it. Mainly retail, FMCG & electronics are top sectors in terms of experiencing high CAGR of domestic market size. This is purely an outcome of forces of market demand and supply. This can also be seen as an outcome of second best theory in the literature of economics. So, if our government and policymakers want to expect and experience significant surge in exports of India, then it should be an outcome of market forces and not an artificial policy outcome.

Coming back to the context of RCEP, any foreign economy will be delighted to cater to the Indian consumer base due to the reasons discussed above. But India has a tightrope to tread because of the potential impact of RCEP membership on its domestic industry, particularly with the benefit of hindsight on the ASEAN trade agreement.

Having said that, export focus is necessary, as it drives competitiveness, visible from the success of Japanese, South Korean and Chinese companies in the past few decades. Moreover, India cannot stay on the fence on mega trading blocs like RCEP forever due to the fear of competition, as such an outcome would in itself push us many years behind on competitiveness.

Policy must focus on reducing the opportunity gap between the domestic and the export market, over and above incentives like MEIS, duty drawback and facilitation of credit. This will of course involve action across several levels. India’s MSMEs must be encouraged to leverage the benefits of scale, for which setting up of export-oriented clusters would be a welcome step. Quality standards for the domestic market should be brought at par with global standards to make compliance less daunting. They must also be facilitated in leveraging R&D, acquiring latest technologies and and branding in sectors where India has intrinsic strengths and which also have growth potential in the global market.

Enquiry for RCEP Impasse: Are Indian businesses necessarily to blame?