Sustainable small-scale fisheries could be a major step towards attaining self-sufficiency and sustainability for India’s marine products sector. However, given the buy low-sell high dynamics of the sector and the post-pandemic impact, these fisheries require well-directed support through initiatives likes restructuring of loans, value addition and aggregation into FPOs. 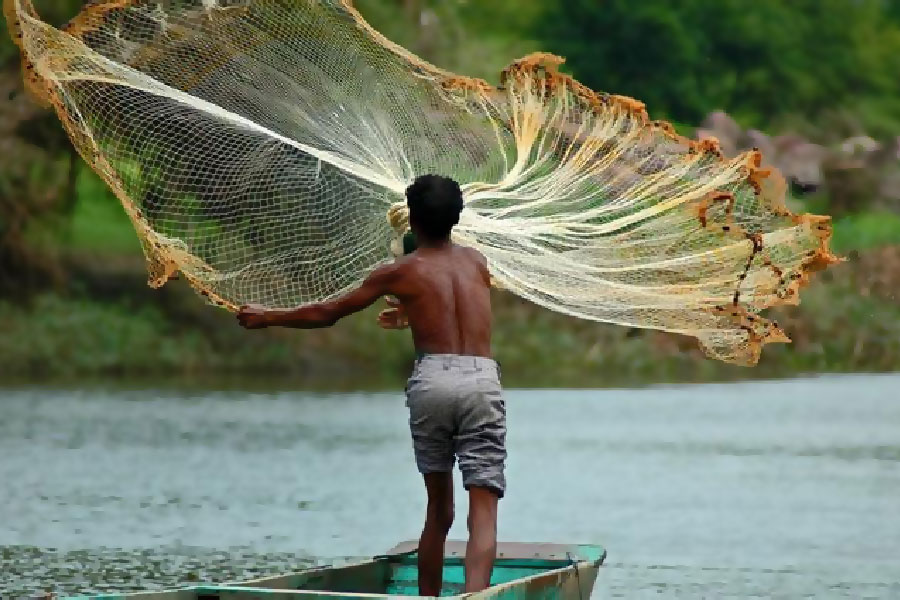 Fish is an important component of a nutritious diet in many countries. It is not only healthy but it’s harmful impact on the environment is also comparatively low. This important source of food security, employment, and forex earnings is food for 3.3 billion people across the world and satisfies 20% of per capita animal protein requirement, hence making it extremely important for addressing hunger and malnutrition.

The sector is also a valuable contributor to employment generation. Around 59.5 million people were employed in the fisheries and aquaculture sectors together in 2018 – 20.5 million in aquaculture and 39.0 million in fisheries. The advent of aquaculture – farming of aquatic organisms, including fishes – has made fish accessible to land-locked countries as well. The aquaculture sector is expected to grow annually at an average of 2% and this will turn out to be a driver of future growth in fisheries production and trade. Other key drivers include increased production, technological developments, increasing income, increased awareness of health benefits of fish, and reduction in wastage. This projection is also supported by OECD Trade Outlook, which emphasised that aquaculture will produce more fish than capture by 2028.

Dynamics of the global coastline

Fisheries come under the HS Code-03 (fish and crustaceans, mollusks, and other aquatic invertebrates). The ITC classification does not differentiate between fish caught and those cultivated through aquaculture. Global exports in the fisheries sector have grown by 5% over the last 5 years (2015-2019). In 2018, US$ 125 billion worth of fish was exported in the world – the highest value ever. This value declined by 2% in 2019 to US$ 123 billion and the COVID-19 pandemic will further lower the value of exports.

According to UN Comtrade, China, Norway, Vietnam, India, Chile, Canada, and the US are the top exporters of marine products, accounting for about 42% of the global exports in 2019. The US is the largest importer of fishes followed by China, Japan, Spain, France, and Italy. Taken together, the US, China, and Japan account for 24% of the global imports. China catches the largest volume of fish followed by Indonesia and India. Around 88% of the fish produced in 2018 was directly consumed, and the rest 12% was for non-food purposes like ornamental use, fingerlings, fry, pharma inputs, etc. Shrimps and prawns, Atlantic salmon, and cuttlefish and squid are the main traded varieties.

India is the fourth largest exporter of fish and fish products and accounts for about 5% of global exports in the category. It is the second-largest aquaculture producer and third largest fish producer. The sector’s imminence to Indian economy not only derives from the trade surplus it generates (trade surplus of US$ 6.02 billion in 2019) but also from its stature as a source of livelihood for more than 20 million people and a contributor of as much as US$ 23.8 billion to GVA.

Frozen and smoked varieties of shrimps and prawns, cuttlefish, and frozen fish are the main exported commodities for India. Shrimps and prawns made the largest contribution (1.34%) to the country’s export clusters in 2019. Trade has largely been good, but it slowed after 2017 and the share in world exports has been declining since. India’s rank in fishery and aquaculture exports has also been on a slide – from being the second-largest exporter in 2008-10 and 2012, it stood third in 2017 and right now it ranks fourth. A decline in shrimp prices is one of the reasons for the slide, apart from increased shrimp production in Vietnam and Taiwan in 2018 and onwards. India is the largest shrimp producer in the world, and a major share of foreign exchange comes from exports of this product. 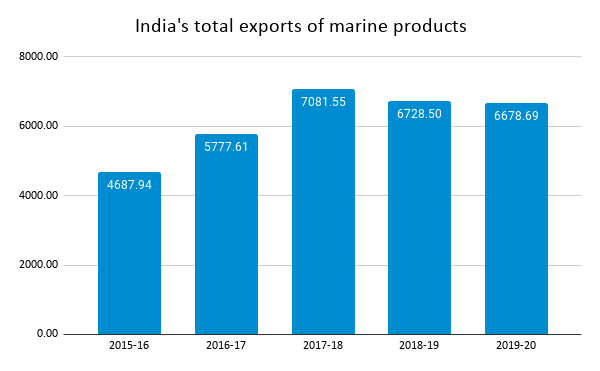 Source: MPEDA, figures in US$ million

More than 50% of India’s marine products exports go to US (33.2%) and China (21.8%), followed by Japan, Vietnam, Thailand, and UAE. Its exports after 2017-18 have significantly increased in China and the USA. However, other regions like the EU, Japan, South East Asia, and the Middle East have witnessed a decline as is clear from the graph below. This is interesting as 2018-19 was marked as an year of trade tensions between China and USA as well as Brexit speculations, which could have slowed growth.

High global fish prices and Indian production went in India’s favour, apart from  a protocol signed on 28th November 2018 to enable export of Indian fish, meat/fish oil to China. However, in order to compete with countries like Norway, which have strong share in European markets, India needs to upgrade its technology game. Right now, India’s position in the global fisheries trade is driven by the high concentration of its population employed in this sector. However, where it lacks is the average per capita annual production in aquaculture, which is just 2 tonnes as compared to industrialized countries like Norway (172 tonnes per person) and Chile (72 tonnes per person). 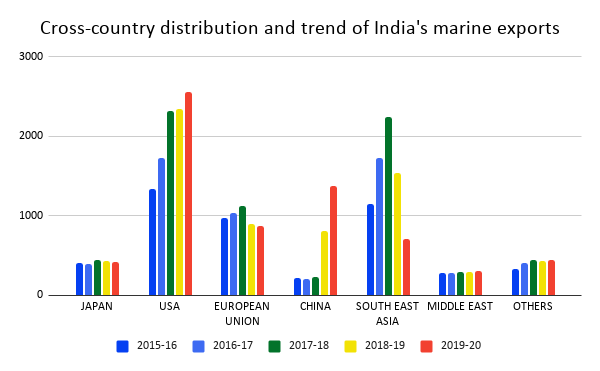 Source: MPEDA, figures in US$ million

COVID-19 virus infected this sector as well. Indian fish farmers particularly got impacted due to wastage of 10,000 metric tons of produce and the stranding of 15,000 migrant farmers. The demand and prices of fish products severely got impacted by social distancing, border controls, and a decline in air traffic. Restaurants and hospitality sectors comprise the major share of fish consumption, so shutdowns of public gatherings as well as restaurants brought it to a halt. Even as the the containment measures are lifted, returning to the pre-COVID level could take time. Further, the economic contraction witnessed might reduce spending capacities worldwide, affecting the export demand and recovery of the sector.

The sector was already struggling to deal with climate change issues that affect the habitat and migration pattern of fishes, which impacted the trade and production, and the pandemic has posed another challenge. Sustainability and self-sufficiency are the two important areas that require attention in order to overcome this.

Pradhan Mantri Matsya Sampada Yojana flagship scheme for sustainable and clearly directed development of the fishery sector is an important initiative announced by the Government of India. Under this scheme, around Rs. 20,050 crores have been allocated to boost exports and production of the fishery sector. Out of this, Rs. 12,340 crore is to be allocated to inland and marine fisheries and aquaculture and Rs. 7,710 crore to the fishery infrastructure.

Seeing the devastation caused by the pandemic as well as climate change issues, it is important to maintain livelihoods as well as comply with the SDG goal 14 of “life below water”. Now, post-COVID, the emphasis has to be on new technology, hygiene, and e-marketing; as in the future, growth and productivity will not be the only parameters of success. According to a report by Bhaskar Chalasani, the industry was already in the middle of a paradigm shift when COVID struck, towards achievement of the following objectives:

Technology and ESG interventions could lead to a conservative cost of production savings by 25-50% in the coming 2-5 years. An idea in the direction is sustainable small-scale fisheries (SSF) that incorporate locals and are more species selective. Here the catch volume is significantly lower and employs traditional techniques that are pandemic safe owing to the lesser no. of people involved, utilization of the land on beaches, and a smaller consumer base.

The future will welcome fishing businesses that are local suppliers and have short-commodity supply chains. Small scale fishers account for around 90% of all people involved in fisheries according to FAO. They are considered critical to ensure sustainability in fishing, protection of marine wildlife habitats and ensuring cultural and traditional knowledge is protected.

However, small farmers face a significant constraint, as the value chain works on buy low-sell high model with little focus on value addition. Furthermore, these farmers are facing the following challenges post-COVID:

1. Crop losses and MTM (Mark to Market) losses due to lock down.

2. Crop holiday due to lock down uncertainty.

4. Yet to harvest product – Good money after bad money to feed the shrimp.

Bhaskar suggests that the best way to address these issues is to aggregate NPAs (farmers) into an FPO model, ensure restructuring of loans as a cluster and also seek new loans to prepare farmers for emerging market conditions such as ESG compliances. Additionally, value addition needs to be encouraged through ready-to-eat, ready-to-cook and marine small shrimp processing to improve realisations for these farmers. In addition, the Pradhan Mantri Matsya Sampada Yojana scheme should be suitably revised to include interests of small farmers’, apart from the main beneficiaries (wealthier farmers and exporters), in order to ensure a more holistic outcome.

Enquiry for Fisheries trade: Making ‘small’ the next ‘big’!