• Openness to trade and investment are core to Malaysia’s economy, with around 40% of employment linked to export activity
• India has a high trade deficit with Malaysia at present, primarily due to imports of mineral fuels and edible oils.
• Palm oil imports and re-routing of cheap imports of steel, aluminium and copper from Malaysia are major  concerns in the bilateral relationship.
• Due to low complementarity and pre-existing trade agreements between the two economies, prospects of gains from RCEP are relatively low. 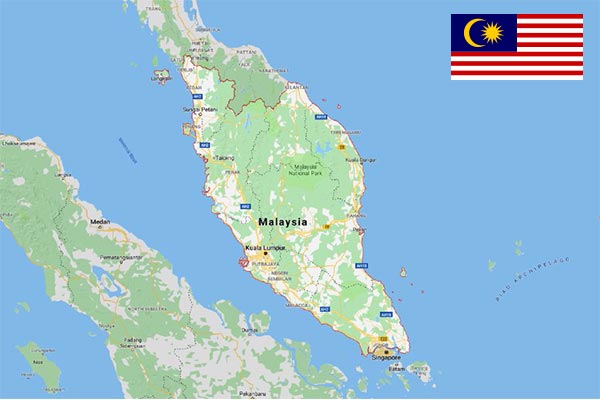 Malaysia is one of the most liberal economies in the world, with a trade-GDP ratio averaging over 134% since 2010. Openness to trade and investment have been key in employment generation and income growth, with about 40% of jobs in Malaysia linked to export activities. After the Asian financial crisis of 1997-1998, Malaysia’s economy has recovered remarkably with a GDP growth of 5.4% since 2010, and is expected to transition from an upper middle-income economy to a high-income economy by 2024. 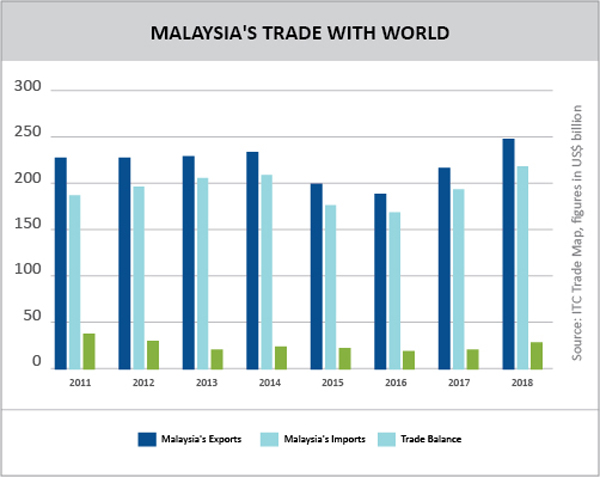 In the past three decades, Malaysia has successfully truncated high poverty rates and reduced income inequalities. Following the removal of broad-based subsidies, the government has gradually moved towards more targeted measures to support the poor and vulnerable, mainly in the form of cash transfers to low-income households.

Malaysia’s near-term economic outlook will be more dependent on government measures to sustain private sector activity as an increasingly challenging external environment reduces opportunity for export-led growth, and reduced fiscal space limits the scope for public investment-led expansion. Over the longer term, as Malaysia converges with high-income economies, incremental growth will depend less on factor accumulation, and more on raising the level of productivity. While significant, Malaysia’s productivity growth over the past 25 years has been below several global and regional peers. Malaysia is India’s third largest trading partner in ASEAN after Indonesia and Singapore. India is the largest trading partner for Malaysia among countries of the South Asia, excluding China. To facilitate trade in merchandise goods, both countries have offered ASEAN Plus commitments and in Trade in Services, both sides have exchanged GATS Plus offers, signalling a strong favourability towards enhancement of trade ties. Malaysia seeks strong expertise in a variety of services areas, which includes accounting and auditing, architecture, engineering services, medical and nursing and computer-related services. India has an edge in these segments, thus providing an opportunity to escalate the services trade. 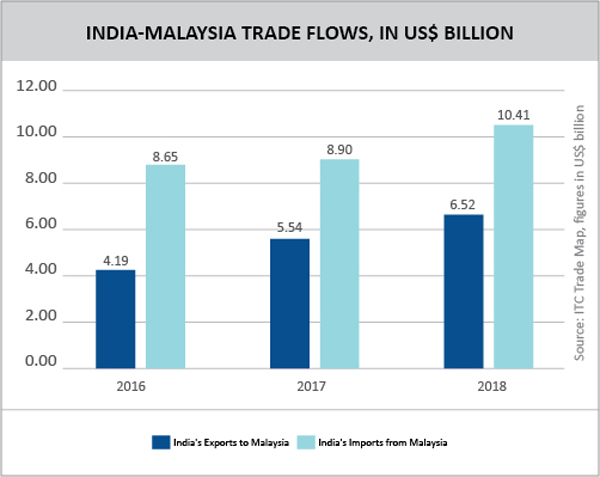 India has a negative trade balance with Malaysia primarily due to our imports of mineral oils and edible oils. On the positive side, India’s exports to Malaysia increased by 24% from 2016 to 2018, while imports surged by 9%, signalling an augmentation in trade figures.

Agri-products are a major area of export potential for India. It has strengthened its position as a net food exporter with a consistent trade surplus in food and agricultural products, though the country remains susceptible to production and price shocks for various commodities. The food processing sector has been growing at an average rate of 8% per annum in the last two fiscal years. Some of the top potential agri-products for exports to Malaysia are semi or wholly-milled rice (potential of US$ 190 million); shrimps and prawns, frozen (US$ 137 million); onions and shallots, fresh (US$ 59 million) and pepper (capsicum or pimenta), dried, crushed or ground (US$ 51.5 million) according to ITC Export Potential Map.

Top agri imports by Malaysia, In US$ million

India and Malaysia have entered into two trade agreements, which allow lower tariff rates already –India and Malaysia Comprehensive Economic Cooperation Agreement (CECA) and India-ASEAN FTA, which involves eleven countries. The CECA is a single undertaking covering goods, services, investment and other areas of cooperation. RCEP as a third agreement is capable of bringing competition for India from Australia, New Zealand and China especially in agriculture sector.

Indian palm oil producers have been especially unhappy with the CECA agreement. Last month, the Solvent Extractors Association (SEA) requested the government to increase import duties on refined palm oil imports from Malaysia to support India’s domestic industry. Indian steel, copper and aluminium players have also alleged that Rules of Origin are being misused under the India-ASEAN FTA to re-route cheap imports into India via Malaysia. In January 2019, India had reduced the duty on refined palm oil originating in ASEAN countries from 54% to 45%.

Recently, Malaysian PM Mahathir Mohammed opined that the RCEP agreement can go ahead without India for the time being. This statement stems from frustration due to unsuccessful attempts to convince India to provide desired levels of market access to RCEP members.

On closer analysis, however, one finds that India and Malaysia are direct competitors with a relatively low level of complementarity. Moving from competition to cooperation will require radical changes in administrative procedures as well as mindsets. Thus, even from Malaysia’s perspective, RCEP isn’t expected to bring significant gains in trade.