Back to basics: Compelling case for a rural economy

• After India was put under a 21-day lockdown to contain the Covid-19, the country witnessed a heart melting scenario. Millions of panic-stricken migrants flocked to their hometowns in the fear that they’ll perish of starvation in the city.
• This trend of reverse migration depicts how urban metropolises are but second homes for these migrants, a significant number of whom work in the informal economy.
• In this kind of a scenario, one cannot help but ponder over Mahatma Gandhi’s vision of Indian villages being growth engines for village dwellers.
• For materialising this Gandhian dream, both government and private players must work in solidarity to create an enabling environment for industries to thrive in these regions and to provide amenities and opportunities that lure rural inhabitants to stay put. 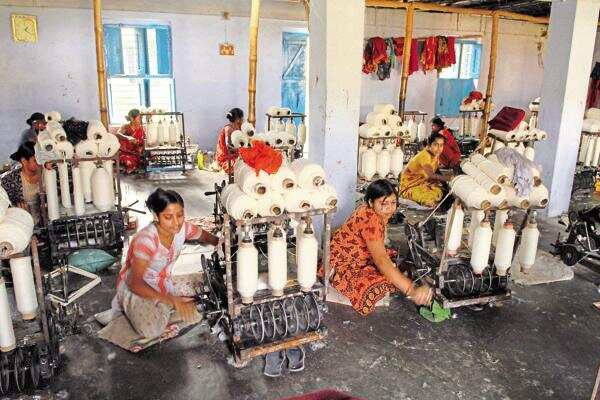 After Prime Minister Shri Narendra Modi made an announcement to enforce a 21-day lockdown in the country to contain the surging cases of Covid-19, the capital city witnessed a heart melting scenario. Millions of panic-stricken migrants flocked to their hometowns in Uttar Pradesh, MP, Bihar and West Bengal, fearing that they’ll perish of starvation in the absence of a steady source of income due to job losses &/or lockdown, if not the virus, soon in the city. In fact, if experts are to be believed, a second wave of home-coming of migrant workers is likely to follow, once the lockdown is lifted. Many who decided to stay back or are stuck in various migrant shelters, would take off at the first opportunity to return home.

This exodus makes it evident that these urban cities were nothing more than second homes to migrants. Though these migrants might inhabit metropolitan centers, they still owe loyalty to their rural roots and brethren as the rest of their family and in some cases, assets like land.

In this kind of a scenario, Gandhi’s focus on the rural economy seems more relevant today than ever. “The future of India lies in its villages,” opined the founding father of this nation, Mahatma Gandhi. To Gandhi, who romanticized village life as self-sufficient, the qualities of village and rural life far surpassed those of the city. Let us look at some facts which make for a compelling case why a robust rural economy can lie at the heart of the nation’s progress and development.

According to 2011 Census, a whopping 83.3 crore Indians (or 68.84% of the population) are the inhabitants of the country’s rural hinterland, that is around 6,40,867 villages. Further, there were 454 million migrants in India, of which 14.6 million individuals migrated from rural to urban areas for work and business (4.7% of all migrants). 43% (2.0% of all migrants) of these 14.6 million individuals were inter-state migrants. This massive number of internal migrants depicts  how such a delude of people is forced to leave behind the comfort of home and move to the cities in search of better employment opportunities.

Meanwhile, it has been reported that around 87% of all employed persons in India made a living by working in the informal sector according to the Periodic Labour Force Survey, 2017-18. While working in these kinds of odd jobs, these workers tend to be exposed to numerous difficulties like living in congested shanty colonies in unhygienic conditions without any kind of health insurance, just to save some extra money and to send meagre remittance back home.

Thus, to check unplanned migration from rural to urban areas and to improve socio economic conditions of vast majority of population in the country, there is an urgent need to develop rural economy and make its inhabitants self-reliant. This is important not just for the welfare of these people (in terms of reducing the disparity in per capita rural and urban income), for such an endeavour entails other benefits. For example, it would lead to lesser pressure on the resources in urban areas, geographical diversification of production, reducing regional imbalances in growth and development, multiple thriving economic corridors and faster unlocking of the promising consumer markets that exist in rural and semi-urban India.

A discussion paper titled Changing Structure of Rural Economy of India by the NITI Aayog brings to light the fact that contrary to common perception about predominance of agriculture in rural economy, two third of rural income is now generated in non-agricultural activities. However, the study is quick to point out that this impressive growth of non-farm work in rural India has not brought significant employment gains or reduction in disparity in worker productivity. We need to rectify this scenario by creating an enabling environment for the private sector to invest, thereby setting up required infrastructure like electricity, roads water and connectivity. The government must also play an active role in providing these basic facilities through various schemes. At the same time, however, this improvement in industrial infrastructure in rural areas would be futile if it is not accompanied by effective human resources development programmes. Such programmes are imperative in order to impart necessary skills and training to rural youth to match the job requirement in manufacturing/service sector.

Further, now that the studies have shown how non-farm work is gaining traction in the rural hinterland, private players from numerous sectors such as cottage industries and food processing should be encouraged to set up factories in these areas. In fact, situated in the remote corners of Jharkhand, Bokaro has already shown how you should never let a serious crisis go to waste, as goes the famous adage. In the face of this health calamity, a factory is already manufacturing sanitizers called Smiling Bokaro. These sanitisers are in full compliance with World Health Organization norms and available at an affordable ₹ 210 per litre.

Finally, basic amenities such as a robust education and healthcare system must be established in these areas. Not only will these enhance the quality of lives that the occupants of rural areas lead, they will also be business opportunities for industry players. Moreover, it would check rural to urban migration as villagers find all those reasons for which they migrate – jobs, education of their children or healthcare – within the proximity of their very own homes. It may seem daunting to balance corporate profitability and social welfare, but there are quite a few companies who have managed to achieve this quite successfully.

Enquiry for Back to basics: Compelling case for a rural economy