“We must avoid the overreaction during the 2008 economic crisis”

Prof Ashima Goyal, Indira Gandhi Institute of Development Research, tells TPCI that the effects of Covid-19 may be temporary on the Indian economy. She suggests a string of measures to help the country’s stumbling economy to tide over these challenging times such as strengthening credit disbursement channels, enabling daily workers & casual labour to survive this period, supporting fiscal & monetary policies and so forth. 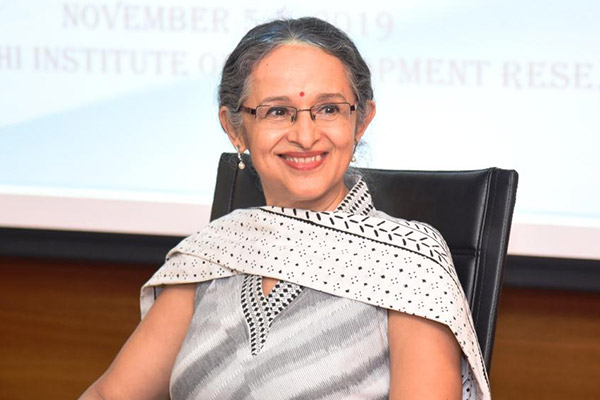 TPCI: What impact would the halt of production in the wake of Coronavirus outbreak in India have on its GVA?

Dr. Ashima Goyal (AG): Output would actually fall in this quarter as the lockdown affects about 75% of activity and India’s annual rate of growth may be only 2-3%. If activity is allowed to resume in April, as preventive actions as well as warmer weather succeed in preventing a rise in infections, and appropriate stimulus measures are given, the damage could be reduced. Setbacks are temporary.

TPCI: Which are the key sectors that are most likely to be hit due to this?

AG: Hospitality, transport, sports, press media, construction directly, financial sector as repayments are affected and others from fall in demand and logistics disruptions due to the lockdown.

AG: The government at present is focused on battling Covid-19 itself. Current economic costs are miniscule compared to the cost and disruption from widespread infection in a country of India’s population size. Even if there is 1% fatality it could mean 1.3 crore deaths, an overwhelmed health system, and economic devastation. So, apart from imposing quarantine and social distancing, the government is stepping up spending on health sector preparedness.

Steps to minimize impacts on the economy must follow a sequence. First, enable daily workers and casual labour to survive this period. Income transfers and food kitchens will be required for the first. States, civil society and NGOs will have an active role here. Many schemes have been announced.

Second, there should be temporary provision of credit and tax breaks so that no inherently viable firm has to close down permanently.  It must be clearly communicated that preventive actions will reduce the period of disruption and activity will be helped to revive, in order to reduce irreversible exit decisions. Loans must not be classified as non-performing for a period of 6 months in order to give firms time to resume activity and re-payment. Credit distribution channels must be strengthened. This requires supporting the bond market through repos and refinance for entities that can help liquidity percolate through every nook and corner of the economy. These measures must be announced to be temporary in order to prevent moral hazard. Unviable entities would want permanent support, which should be avoided. The aim must be to prevent a temporary shock resulting in a permanent destruction of assets.

Third, as supply revives, demand boosts must be given through fiscal and monetary policy.  The stimulus must be adequate but temporary, avoiding the overreaction observed after the global financial crisis in 2008, and moving towards balance. Transfers of about Rs 10,000 can be made to each poor household through Jan Dhan accounts, and other schemes where they are identified. Additional fiscal stimulus of even about 1% of GDP will make about Rs 2 trillion available for spending. Financing of about 0.5% can come from taxes on oil, even as some of the fall in oil prices is passed on to consumers. The budget deficit itself can expand to 5% of GDP, with fiscal consolidation being resumed after growth revives.  The RBI has space to cut policy rates, even within its inflation targeting framework, as inflation is falling with oil prices, but more importantly it has to act with liquidity injections through the term structure of interest rates to bring down spreads and improve transmission.

Fourth, financial institutions and markets need a combination of liquidity support, capital injections, lower rates as well as discipline from strong corporate governance. NPAs were bottoming out, but the new stresses are likely to be acute. The system had absorbed a number of shocks showing resilience, even as reforms strengthened its fundamentals.  Even as the latter continue, for the next few months it needs support to prevent spillovers from a large number of firms being unable to repay. Temporary payment difficulties must not be allowed to lead to a chain of bankruptcies that magnify each other.

Finally, longer term measures must bring back some key production, such as of active pharmaceutical ingredients, to India from China. If must also attract to India, foreign firms that will be looking to reduce dependence on China.

TPCI: What is your take on the relief measures announced by the Finance Minister to help people sail smoothly through this crisis? What effect will it have on the economy?

AG: The measures are yet only first steps in the sequence. Giving time for tax and other regulatory compliance reduces pressures on firms to close their books by March-end—impossible with the lockdown. It acknowledges the current problems, emphasized that they are temporary, and gives a timeline for moving towards normalcy. There is also relief for MSMEs who will not have to declare bankruptcy. The next steps in the sequence are awaited.

AG: Cash transfers to the poor who can be quickly identified, as well as relief in kind such as community kitchens for the period of acute distress. Transfers will also help sustain demand and spending in the economy.

TPCI: What can we learn from countries like South Korea, who have been better at managing this crisis?

AG: South Korea has been testing intensively, tracking and isolating the infected to keep contagion low. Given India’s large population it is difficult to have the same intensity of testing. The lockdown was therefore necessary to impose social distancing and reduce contagion. This period should be used to increase testing, isolate and contain pockets of infection allowing the rest of the economy to move towards normalcy in a short period.

Prof Ashima Goyal is widely published in institutional and open economy macroeconomics, international finance and governance, with more than a hundred articles in national and international journals. She has also authored and edited a number of books including Macroeconomics and Markets in Developing and Emerging Economies (Routledge: UK. 2017) and A Concise Handbook of the Indian Economy in the 21st Century (OUP: India, 2019). She edits the Routledge journal Macroeconomics and Finance in Emerging Market Economies; has provided consultancy to ADB, DEA, GDN, UNDP, RBI, UN ESCAP and WB; is active in the Indian policy debate; and has served on several government committees, boards of educational and of financial institutions, including the RBI technical advisory committee for monetary policy. Currently she is a Member of Economic Advisory Council to the Prime Minister, an independent director at Edelweiss Financial Services, IDBI bank and SBI General Insurance. She has been a visiting fellow at the Economic Growth Centre, Yale University, USA, and a Fulbright Senior Research Fellow at Claremont Graduate University, USA. Her research has received national and international awards. She won two best research awards at GDN meetings at Tokyo (2000) and Rio de Janeiro (2001), was selected as one of the four most powerful women in economics, a thought leader, by Business Today (2008); was the first Professor P.R. Brahmananda Memorial Research Grant Awardee for a study on History of Monetary Policy in India since Independence (2011), which was published by Springer in 2014; received the SKOCH Challenger Award for Economic Policy (2017); Hindu College OSA Distinguished Alumni Award and 20th FLO FICCI GR8 Beti Award for Excellence in Economics (2018).