As of 2022, India stands at 87th position in the Henley Passport Index, along with Mauritius and Tajikistan, in the global ranking of powerful passports among all other nations. This blog explores the basis of such rankings and evaluates how it can improve its passport power ranking.

● Japan and Singapore topped the passport power ranking of the Henley Passport Index in 2022. As of 2022, India stands at 87th position, along with Mauritius and Tajikistan, in the global ranking of powerful passports among all other nations.

● The global pandemic, COVID -19 has affected the travel rankings of nations across the world, especially the European countries.

● India has managed to evolve its passport power, since 2006, along with facing disruptions in its rankings due to COVID-19.

● If the country wishes to make it to the top, it needs to up its investment game. The other factor that shall help the country is visa-waiver. 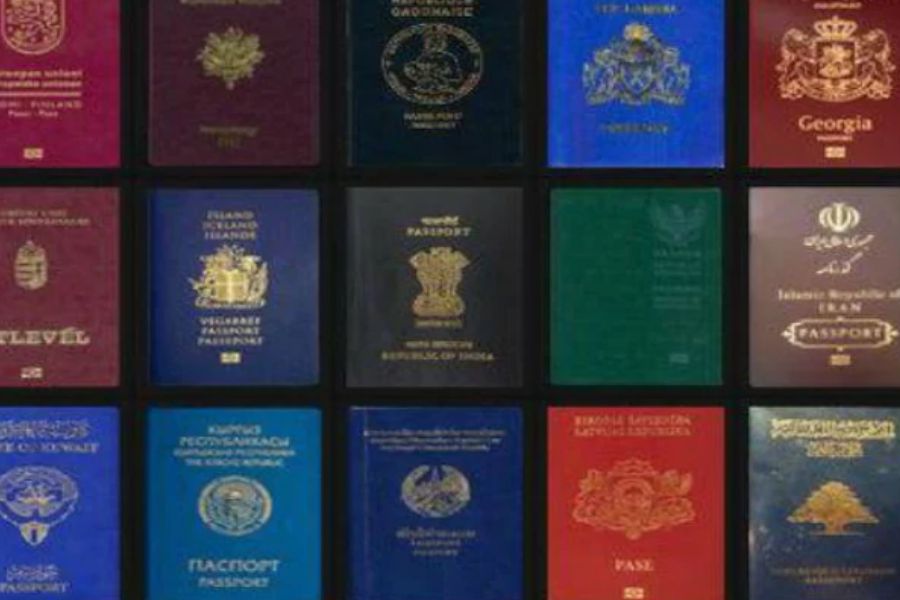 The Henley Passport Index has been actively updating and monitoring the globe’s most travel-friendly passports since 2006. It has ranked 199 passports in its list of the world’s most powerful passports to date. As far as the year 2022 is concerned, the index has mentioned Japan and Singapore to have the most powerful passports in the world. These nations have acquired travel freedom to about 192 destinations, visa-free. Second spot on the list is occupied by Germany and South Korea. The passport holders of these two countries can travel to 190 countries without any visa restriction.

The index lists Afghanistan as the weakest passport in the world. The passport holders of the country can travel to merely 27 countries. The Afghanistan passport is followed by the Iraqi passport, which allows holders the freedom to travel to about 29 countries. The rankings are however demarcated due to the COVID-19 pandemic. This global pandemic has laid the foundation for discussions of making the migration channels more flexible on the European front. Experts such as Dr. Christian H. Kaelin, the present Chairman of Henley & Partners have also suggested the same to minimize the post-pandemic effect on the rankings of these nations.

To arrive at the world ranking, the Henley Passport Index analyzes the data of the past years to the present, such as travel friendliness of these countries. Such data then helps the global regulatory authorities to identify the worth of citizenship among these nations. The index also takes into consideration the ease of traveling visa-free, a visitor’s permit as well as access to visa-on-arrival in these countries. Visa-free travel to 277 destinations is considered for this purpose.

For each of the destinations where the passport holder can travel without a visa, across a country, or may be a territory, a score of value is assigned. Similarly, such value is given in case of flexibility of visa on arrival. Then the cumulative score is taken into consideration to arrive at the rankings by the index.

As of 2022, India stands at 87th position, along with Mauritius and Tajikistan, in the global ranking of powerful passports among all other nations. In the interactive real-time passport index, Henley has observed the Indian passport to be holding the position of travel-friendly mobility in about 60 countries.

While taking note of the evolution of passport power ranking for India, over the lasrt 17 years, it can be said that the country has seen a tough ride in some of the years to enhance its position in this global ranking.  The following graph traces the listing of Indian passport power over the years in the Henley Passport Index. 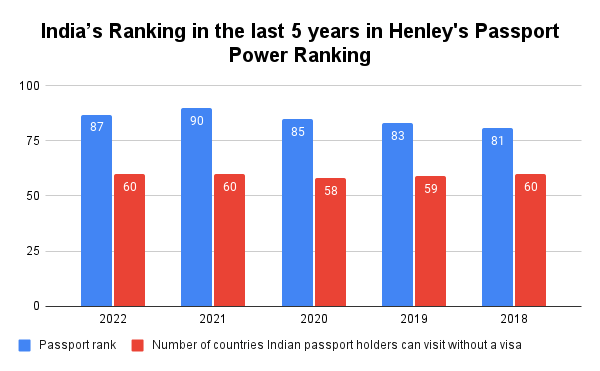 As can be observed from the above chart, India’s ranking in the index has slipped and then moved towards regaining its position in the list, in the past 5 years. However, if the number of countries is concerned, to which the Indian passport holders can seek to travel on its mobility score, that certainly balances the equation here.

In 2006, India’s ranking in the global index was 71 with access to only 25 countries. Cut to 2022, the passport holders can now travel to 67 countries, with a ranking of 87 in the charts. So, as we closely observe the data, what we can gauge is that the country may have moved in a zig-zag direction as far as its rankings come into play, but has moved in an upward direction as it competes with its passport power over the decade and a half. This simply means that the country has been gradually growing its power but has been left behind as compared to its competing nations. Now, if we explore the reasons for India’s average mobility score in the past 2 years, the pandemic has played a precarious role. The global passport power ranking of India fell to 90th position in 2021, from 83rd position in 2019 and 85th position in 2020. Also as outlined by Chris Dix from VFS Global, the visa applications in the country have been averaging as high as 20,000 per day during the holiday season. This could also stand in the way of improving the power ranking of India at the global level.

How can India improve its passport power ranking?

The strength of the passport and its ranking on the global front depends on many factors. Economic conditions and bilateral agreements with political stability play a major role. A passport that offers the most visa-free travel across continents, is considered to be the most powerful. This is a sign of high per-capita income as well as progressive travel policies, implying the largest power of the country amongst the other nations.

India, as a country, is trying to pave the way for taking itself to a higher position in the world passport power ranking. The present government has significantly tried to improve its trade relations across the world since it has been in power. For instance treating foreign policy as a force for national interest and stepping towards the Quad for the Indo-Pacific space with countries like the US, Japan and Australia with utmost clear objectives and a reach for common prosperity.

Unfortunately, due to many extrinsic factors, such as the pandemic and the economic difference in the country, such as the purchasing power disparity over the years, has indirectly affected the growth in power of the Indian passport and that led the same to not being able to straw through its capabilities over these years.

What can be ascertained from the discussion is that, if the country wishes to make it to the top, it needs to up its investment game. More Indian nationals opting for golden visas or migration programs can help enhance the power of Indian passport holders. The other factor that shall help the country is visa-waiver. The geopolitical failure and the disruption caused by the pandemic can be curbed in real-time by taking these small steps. Also, as far as the political front is concerned, a post-pandemic recovery plan being in order may result in a leap in the rank in the next five years for the country.

Enquiry for India’s passport power: Time to scale up