Healthcare spending in the budget: Stepping stone to good economics

The Indian government has hiked allocation on healthcare sector dramatically (rise by 137% yoy), a good part of which will go towards the much-needed COVID-19 vaccination (INR 35,000 crores). This blog explores how augmenting investments in the healthcare segment can provide a booster shot for the Indian economy. The COVID-19 pandemic has been quite an eye-opener for governments across the world, for it is a testimony to how a health crisis can push millions of people across the globe into the web of poverty. Battered by this health-cum-socio-economic crisis, several governments have learned a lesson when it comes to allocating the budget for public healthcare spending. In China, for example, healthcare is expected to feature even more heavily in the 14th Five Year Plan (2021-25) than it did in the previous one. Similarly, German federal government spending on health, environment, sport and recreation reached US$1.2billion in the first quarter of 2020, up from US$600m) a year earlier. The Indian government is no different, as evident in the Union Budget 2021.

Among other things, the government has hiked allocation on healthcare sector dramatically (by 137% YoY rise), although a good part of this will go towards the much-needed COVID-19 vaccination (INR 35,000 crores). Some of the other major budgetary allocations to the sector include National Health Mission (INR36,577 crores), Ayushman Bharat – Pradhan Mantri Jan Arogya Yojana (INR 6,400 crores), Centrally Sponsored Schemes (INR 22,044 crores) and Establishment Expenditure (INR 6,245 crores). As Elias George, Partner and National Head, Infrastructure, Government and Healthcare, KPMG India says:

The enhanced resourcing for healthcare and allied sectors, along with the regulatory improvements and institutional restructuring that have been proposed, will all hopefully contribute to improving health outcomes and enhancing economic growth, and success would now lie in how these new initiatives are implemented.

The budget has also earmarked funds for the operationalization & strengthening of Public Health Units and offered to amend the customs rules to provide an exemption from health cess on medical devices imported by international/diplomatic organization.  These moves are being welcomed by some of the industry experts. Mr Sudarshan Jain, Secretary General, Indian Pharmaceutical Alliance states:

The allocation of INR 64k Cr (over 6 years) on the PM Atmanirbhar Swasth Bharat Yojna will help boost the healthcare infrastructure across primary, secondary and tertiary care and the Vaccination program is well-funded with over INR 35k, it will help the country address the pandemic. All these initiatives are pointers to increased investment in healthcare infrastructure and will strengthen the sector going forward.

A new chapter in history?

Despite improvements in healthcare access and quality, India’s performance is underwhelming not just in comparison to the USA (- another major democracy), but also other developing nations. The ‘Commitment to Reducing Inequality Index 2020’ by international charity Oxfam ranked India’s health budget in the face of COVID-19 pandemic as the fourth lowest out of 158 countries surveyed. Bagging the 155th position on the health spending index, it spent less than 4% of its budget on health. It stated that more than 70% of health spending is being met by people themselves, one of the highest levels globally. It is not very appalling to say that India continues to be among the worst performers globally when it comes to per capita per year government spending on health either. The National Health Profile 2019 produced by the Central Bureau of Health Intelligence categorically mentions: 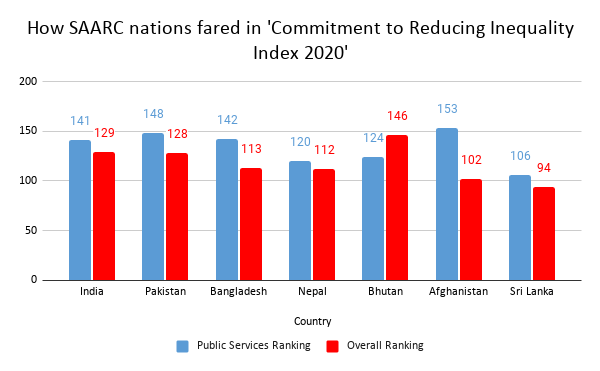 The country’s performance in terms of other parameters is far from great. For example, the hospitalization rates in India (3-4%) are among the lowest in the world, as per the Global Burden of Disease Study 2016. Similarly, the distribution of the health workforce (doctor/nurse-midwives ratio) across states is lop-sided & falls far behind international standards. Thus, the doctor-population ratio in India is 1:1456 against the WHO recommendation of 1:1000. Another thing worth mentioning is that this sector is highly privatized: around 74% of outpatient care and 65% of hospitalisation care is provided through the private sector in urban India.

The latest Economic Survey notes that “an increase in public spend from 1% to 2.5-3% of GDP – as envisaged in the National Health Policy 2017 – can decrease the Out-Of-Pocket Expenditures from 65% to 30% of overall healthcare spend”.

Further, given that healthcare is an employment intensive sector. According to a survey by the WHO, titled Health Employment and Economic Growth, every additional health worker creates 1.5 non-health jobs on an average. Prof. Arup Mitra, Professor (Specialisation in labour and Urban development), Institute of Economic Growth, explains:

For health provisions to impact on growth, huge investments will be required. Of course, the health sector is relatively labour intensive: if investments increase significantly new employment opportunities can be created. Capacity creation in the health sector will encourage health tourism which will contribute to the foreign exchange earnings of the country and add to future growth.

Another benefit that would come from higher public health expenditure is improving human capital. This is attributed to the fact that healthier adults need less time off work and are more productive at work. Similarly, healthier children are more likely to complete and perform better in school, and be better prepared for the needs of the job market. This is clear from the World Bank’s Human Capital Index (HCI), according to which a child born in India today will be 49% as productive when she grows up as she could be if she enjoyed complete education and full health. This will enhance the profits of the company and ultimately a firm’s GDP. Thus, India’s future GDP per worker could double by investing in human capital.

To sum up, the budget has invited unprecedented allocations as well as new programmes and projects in the healthcare segment. This is a welcome move that will go a long way in improving the country’s financial health, which has been severely battered by the pandemic.

Enquiry for Healthcare spending in the budget: Stepping stone to good economics