• As COVID-19 continues to strengthen its stranglehold globally, it has dealt a severe blow to several economies and consequently, trouble has started brewing across financial institutions.
• This period was marred by halt of production, unprecedented supply-side disruption, fall in new business orders and manpower issues.
• The effects of this decline in economic activity have began to spill over to the banking sector. Despite support from the RBI, banks across India are growing anxious about mobilizing revenues, decline in profits, a spike in NPAs and a heightened debt phobia.
• With the government strongly backing credit to businesses including MSMEs under Aatma Nirbhar Bharat, banks have a critical role to play in boosting the private sector. The International Monetary Fund (IMF) in its latest World Economic Outlook cut India’s growth estimate for FY21 from 5.8% estimated in January to 1.9% in April. As has been evident in data released by government, India’s eight infrastructure sectors contracted by a record 6.5% in March after touching an 11-month high in February. Further, data suggests that India’s core sector grew just 0.6% in FY20, compared to a 4.4% rise in FY19. The same has been disclosed by India’s manufacturing PMI, which for the first time in 15 years years dipped to a record low of 27.4 in April from 51.8 in March.

This weak performance is a direct consequence of the tough (albeit necessary) lockdown imposed by the government, which required factories to shut down and consumers to stay within the confines of their homes. For example, it has been estimated by industry lobbies in the country that the losses suffered by the retail sector, comprising around 7 crore traders, during the lockdown amount to Rs 5.50 lakh crore. This period was marred by a halt of production, a sharp dip in disposable income of consumers, unprecedented supply-side disruption, fall in new international business orders and manpower issues. What has added to the woes of this sector is that manufacturers are being bogged down by the weight of fixed costs like paying salaries, rentals and other monthly expenses. This is creating serious economic hardships for India Inc. as these businesses will find it harder to return to normalcy. It is therefore expected that at least 20% of Indian retailers are likely to wind up their businesses in the next few months. 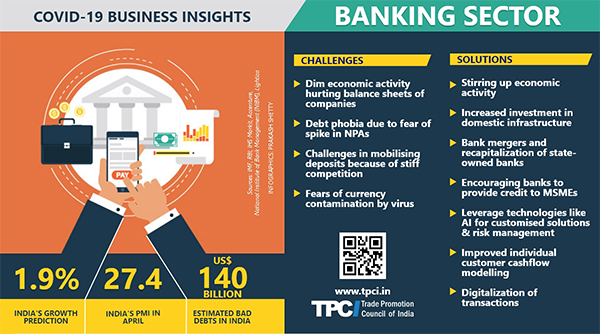 Banking: Saga of cause and effect:

This bleak economic outlook is likely to cast its shadow over the nation’s banking sector. While the industry had just had a sigh of relief a few months ago when data from the RBI revealed that the net NPAs nearly halved to 3.7% in FY19 from 6% in FY18, this joy was short-lived.

Lenders in the country, especially from the private sector, remain reluctant to offer credit to individuals and industrialists amid fears of higher default rates with businesses and jobs at risk. This debt phobia stems from the fact that the country’s banking system is already reeling under nearly US$ 140 billion in bad debt. Prof. D N Panigrahi, Goa Institute of Management, explains:

“As income and cash flows of the existing borrowers on both production and consumption side will be adversely affected because of COVID-19, they will find it difficult to honour the loan repayments on time and in full. This will lead to enhanced loan delinquency/default rates from existing borrowers.”

Acknowledging these chaotic times in its Monetary Policy Report, the Reserve Bank of India (RBI) on 10th April had cautioned that Covid-19 “hangs over the future, like a spectre.” Reaffirming its faith in the country’s banking system, it announced a slew of measures to systematically inject liquidity into the banking sector:

These measures have two USPs: (a) safeguarding liquidity in the banking system through favourably-priced liquidity measures like including aggressive policy rate and cash reserve ratio cuts; and (b) a fundamental recalibration of the targeted longer-term refinancing operations so as to safeguard the continued flow of credit to the economy.

But with hardly any business happening in the country so far, workforce availability still a constraining factor and rampant pay cuts, it is doubtful how many borrowers (both firms and household segment) will be able to cope up with repayments. RBI Chairman Shaktikanta Das’s  announcement on May 22 confirmed these apprehensions, wherein the central bank has again cut the repo rate by 40 basis points to 4%. Also the moratorium has been extended by three more months till August 31.

The dire state of affairs may eclipse gathering deposits too. Banks have reduced the interest rates on savings bank (SB) deposits and fixed deposits (FD) by a large extent. This decline in deposit rates will make it difficult for the banks to retain their existing deposits and marshal fresh ones. Further, the stiff competition from rivals like India Post Payment Bank and other Payment Banks (PBs), Small Finance Banks (SFBs), National Savings Institute (NSI) and even fintech firms etc. will make it tougher for the banks to compete. It is also likely that banks may see flight of deposits into overnight funds and liquid funds because of attractive rates.

Finally, a significant challenge that the banking sector is facing is related to the use of currency as a mode of payment owing to the fear of contamination of coins and notes with this contagious virus. There’s also the possibility of banking professionals being infected with the contagion and thereby, becoming carriers of this disease in the process.

Economic activity remains critical in expediting the banking sector’s recovery. This is especially true of the MSME sector, which constitutes about 13.6% of bank credit. Therefore, efforts must be directed at allowing all these MSMEs to kickstart production. This, of course, should be done while adhering to the social distancing norms and ensuring the safety of workers.

The government has instituted several measures for MSMEs under the Aatma Nirbhar Bharat economic package. This package includes:

These initiatives are significant since MSMEs are the source of the second largest employment generation in India. And this would keep a check on the depleting consumption pattern in the country. Prof. Arindam Bandyopadhyay, National Institute of Bank Management (NIBM), notes:

“Increased investment in improving domestic infrastructure, focusing on indigenous industries like production of medical equipment, medicines and medical facilities, will create sectoral growth. The merger of banks and recapitalization of state-owned banks and easy access of credit to corporates as well as small and medium enterprises will enable the firms to cope with sectoral stress.”

Further, banks should be allowed to streamline the debt on their balance sheets, and procedural requirements for raising capital could be further simplified. Building capacity of the sector in dealing with delinquent and defaulting loans is another aspect to be mindful about. Training staff to augment quality of customer engagement without compromising on the typical recovery procedures will be crucial for a managed recovery.

In the US, banks have already received guidance from the OCC that banks should proactively inform customers that they will do “the right thing” and adopt a highly flexible approach to payment schedules. Further, instead of just concentrating on sectoral modelling, consideration should also be given to individual customer cashflow modelling to offer better solutions, since one size fits all approach may not be the best thing to do in these circumstances.

Banks also need to take the World Health Organization (WHO)’s advisory to use contactless payment and avoid handling banknotes seriously. Some countries have already taken steps in this regard. For example, the Bank of Korea has started to quarantine bills originating from local banks while the Chinese government requested lenders to disinfect physical notes and place them in quarantine. In India too, there has been a spurt in the digitalization of transactions. Private sector banks like ICICI, HDFC and Axis Bank have already launched payment facilities through Whatsapp. However, people still need to be sensitized towards the use of virtual transactions so as to minimize the threat of infections by educating them and familiarizing them with these modes. At the same time, they should be immune from threats like online thefts or frauds.

Enquiry for Covid-19 Banking: Low on contact, high on intensity