Trade Promotion Council of India organised a webinar on the topic Bilateral Trade & Investment Opportunities between India & Lebanon on 4th June, 2021 with the support and facilitation of the Embassy of India in Lebanon and the Embassy of Lebanon in India. 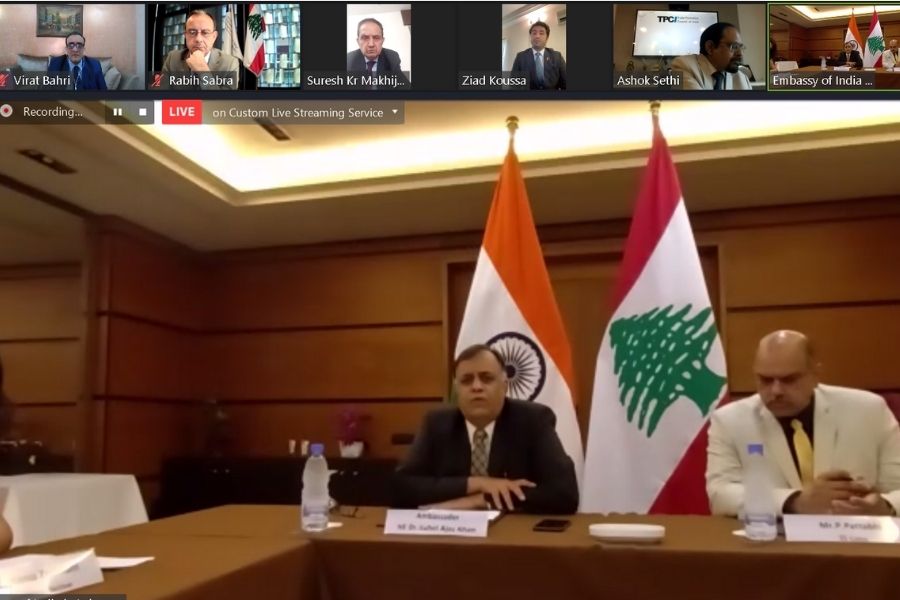 Trade Promotion Council of India organised a webinar on the topic Bilateral Trade & Investment Opportunities between India & Lebanon on 4th June, 2021 with the support and facilitation of the Embassy of India in Lebanon and the Embassy of Lebanon in India. The panel for this session constituted distinguished and eminent representatives from the policy and business ecosystems of both countries.

His Excellency Dr Suhel Ejaz Khan, Ambassador of India to Lebanon, delivered the keynote address for the session. During his address, he commented, “India and Lebanon have always enjoyed friendly ties that are over 65 years old. Trade is a very important aspect of these bilateral relations. However, we do believe that trade between India and Lebanon is very modest, and there is a potential to increase it manifolds. Trade was valued at US$ 260 million in 2019, which came down to US$ 146 million in 2020 due to the economic difficulties Lebanon is going through.”

The Ambassador further emphasised, “Traditionally, Lebanon imports 80-85% of its requirements from abroad, which would give more opportunities to India to expand bilateral trade. We believe India and Lebanon should target US$ 500 million in trade in the coming years. Lebanon can look towards India for its requirements, as they can significantly reduce their import bill.” To achieve this vision, HE Dr Khan articulated a five-point strategy to enhance trade relations:

Mr Ziad Koussa, Deputy Chief of Mission, Embassy of Lebanon to India stated during his address, “We have made steady progress in improving Lebanese exports to India. Olive oil from Lebanon has started entering the Indian market, though in small quantities. We are also seeking a market for Lebanese wines and fruits. We also feel that metal scrap exports to India can be doubled easily given the high demand. ” He further added, “On the other hand, we feel it is in the interest of Lebanese importers to replace their imports from Australia, Europe, etc to India due to the high quality of many Indian products, closer distance compared to US and Australia and above all the competitive prices that the Indian market can provide.”

Ashok Sethi, Director, Trade Promotion Council of India, also supported the Ambassador’s viewpoint on identifying focus products where there is identified trade potential between the two sides, and added, “These are products which we believe can ensure an immediate surge in bilateral trade figures by at least US$ 100 to 200 million in the next couple of years with requisite demand supply match.” He added that focus products identified by TPCI’s research in this regard for India’s exports to Lebanon are medicaments, cane or beet sugar, rice, frozen bovine meat and small motor cars. Conversely Lebanon can enhance its exports to India in aluminium waste and scrap, copper waste and scrap, iron waste and scrap, lead and articles and agro machinery.

The session also witnessed representatives of eminent business councils from Lebanon sharing their insights on opportunities for higher trade with India. These included:

After the session, the panel also addressed questions on specific sectoral opportunities and issues faced by businesses on both sides.