Trade Promotion Council of India organised a webinar on Trade & Investment Opportunities between India & Bahrain in collaboration with the Embassy of India in Bahrain on September 29. The webinar focused primarily on bilateral trade and investment potential for Indian and Bahraini companies in engineering goods and F&B technology. 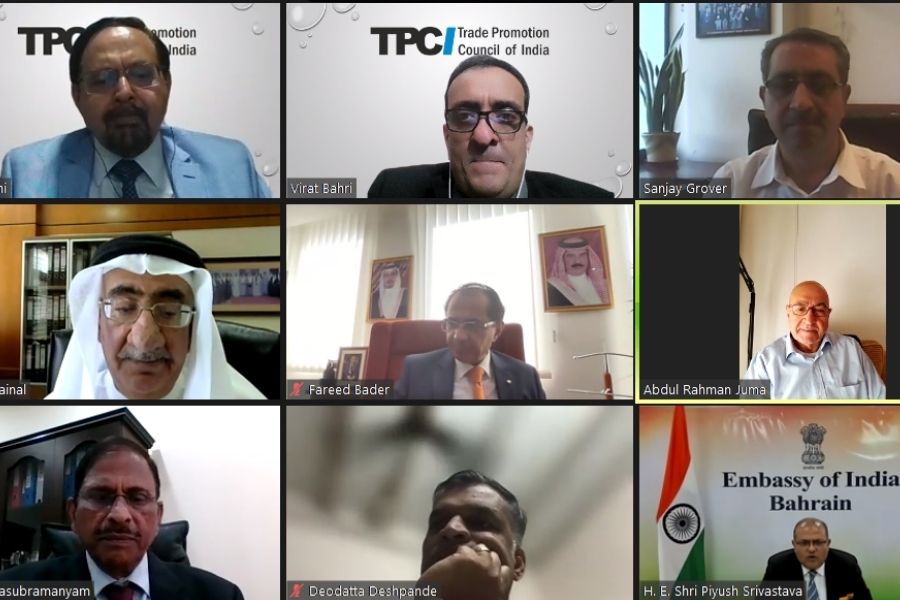 Trade Promotion Council of India organised a webinar on Trade & Investment Opportunities between India & Bahrain in collaboration with the Embassy of India in Bahrain on September 29. The webinar focused primarily on bilateral trade and investment potential for Indian and Bahraini companies in engineering goods and F&B technology.

India-Bahrain relations have been traditionally strong and cordial, on the bedrock of positive political, economic and cultural exchanges. They also have a high degree of convergence on global issues. Bahrain has over 1.2 million residents that also include around 350,000 Indians, which is a major factor fuelling mutual understanding and people-to-people exchanges.

Bahrain’s GDP at current prices was recorded at US$ 33.9 billion in 2020 according to the IMF. After a contraction of 5.4% in 2020, the economy is projected to grow by 3.3% this year. While the Bahraini economy has traditionally been oil dependent, it is becoming more diversified over time, offering opportunities in financial services, technology sectors, manufacturing, logistics, tourism, real estate, healthcare and education. In fact, the economy prides itself in the fact that around 80% of its GDP came from non-oil activities in 2018.

The country has progressively liberalised its economy, thereby offering more opportunities for investment. The government offers 100% foreign ownership across most sectors, with no need for a local partner. Due to these advantages, FDI into Bahrain grew by 114% in 2017, to US$ 519 million, despite global FDI falling by 23% that year (according to Economic Development Board, Bahrain). Notably the economy has US$ 32 billion in infrastructure and real estate developments that are in advanced stages of progress. These include the Bahrain Airport Modernisation Programme, Bahrain Bay – a mixed-use, urban, waterfront development, Diyar Al Muharraq, an all-encompassing development off the coast of Bahrain, and the King Hamad Causeway, which aims to improve throughput to Saudi Arabia. Besides this, Bahrain’s centralised location makes it a vital gateway to the Middle East.

India’s total capital investment into Bahrain between January 2003 & March 2018 has been estimated at approximately US$ 1.69 billion. Financial Services account for around 40 % of total projects, followed by real estate and hospitality sector. Bahrain’s investments into India stood at US$ 181.57 million from April 2000 to June 2021.

Following were the esteemed panelists at the session:

• Fareed Bader, Chairman & Managing Director, Bader Group of Companies and Chairman of Industrial committee at the Bahrain Chamber of Commerce and Industry.

The session was moderated by Virat Bahri, Deputy Director-Media & Corporate Communications, Trade Promotion Council of India. During the session, the panelists from Bahrain enlightened the audience on the business environment in the country, major focus sectors within manufacturing and F&B where Indian companies could explore opportunities and also the changing focus of Bahrain, which is more keen on attracting investments as opposed to purely trading.

On the other hand, the panelists from India talked about trends in the Indian industry and the solutions that Indian companies can provide to Bahrain in the latter’s areas of interest, including petrochemical, aluminium and steel downstream and waste management.

Enquiry for Bilateral trade & investment opportunities between India and Bahrain