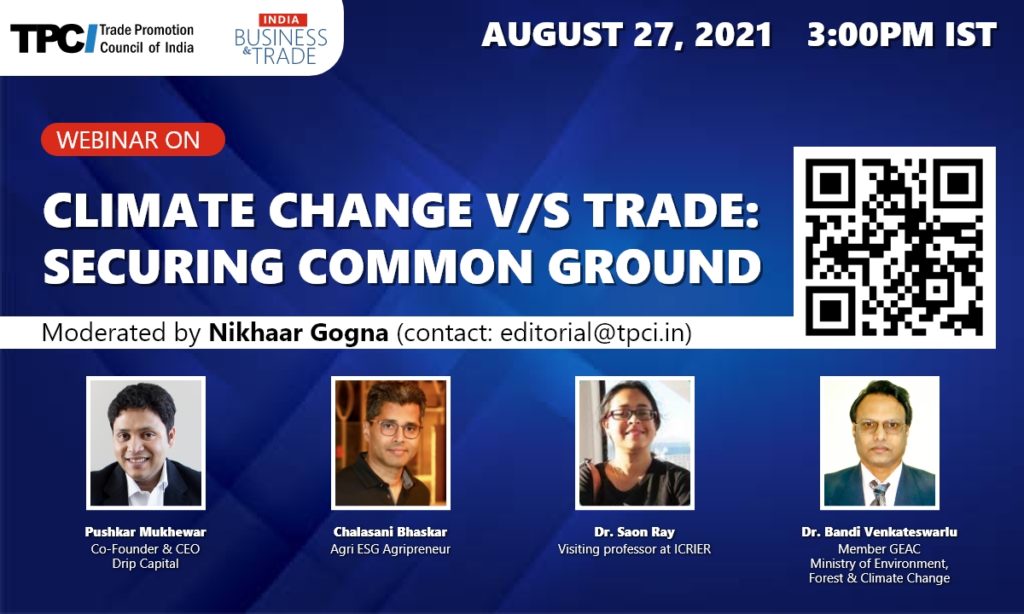 The Trade Promotion Council of India, is organising a webinar Climate change vs trade: Securing common ground on Friday, 27th August 2021 at 3:00 pm. This webinar explores the repercussions of climate change on global trade, the inherent contradictions they lead to, and how these may be resolved.

That climate change has been one of the most important challenges of the 21st century is inevitable. It is important because it not only affects the day to day lives of individuals as natural calamities like floods and forest fires become increasingly common, but because it also poses threats to economies. The Swiss Re Institute warns that if global temperatures rise by 3.2°C, it could dent 18% of GDP of the worldwide economy.

Further, different industries will be exposed to the challenges that climate change brings. The food and beverage industry in the Indian subcontinent is one such industry. The National Innovations in Climate Resilient Agriculture has found, by 2080 there will be a noticeable dip in the yields of rice, wheat and maize. Similarly, Cotton 2040 states that by 2040, 40% of cotton-producing regions are likely to see their growing seasons shortened, while drought could hit half of the global crop.

Given the inevitable risks of climate change, policies are being designed to intersect with international trade. For example, the EU, has announced plans to impose the first trade restrictions in the world for climate reasons. They are keen on levying an additional ‘carbon border tax’ on imports from countries that do not have strict norms for controlling industrial greenhouse gas emissions. This is bound to have an impact on foreign trade. Similarly, the Biden administration has expressed support for the notion of a “polluter import fee” as one means of achieving that goal.

Key takeaways from the session:

The panellists for the session include:

Enquiry for Invitation to webinar on Climate change vs trade: Securing common ground