• In 2019, the volume of global trade of goods and services grew at its slowest pace in a decade, by just 1.5%.
• It is cogently anticipated that a recession in trade in goods and services is going to occur. This slowdown is expected to bring the annual global trade growth figure to -4.5% in 2020.
• The Covid-19 crisis had caused dramatic supply and demand shocks in the world economy, and that these shocks are inevitably causing major disruptions to trade.
• Traders are yet to resume work at import hubs in a full-fledged manner including at Singapore and Hong Kong. Issues such as non-availability of container ships have hurt exports. 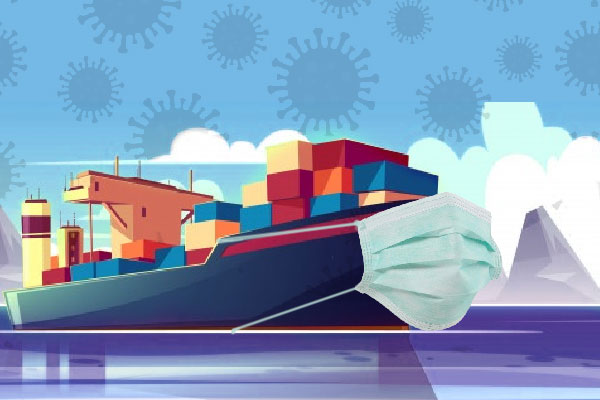 The World Trade Organization (WTO’s) trade indicators for the first quarter of 2020 have already revealed a secular weakening of world trade volumes for both merchandise and services in the aggregate, with further declines in subsequent quarters a foregone conclusion due to the ongoing pandemic.

It is inefficient enough from the trade point of view, that the mitigation strategy implemented to curb the incidence of Covid-19 , i.e. “social distancing” (albeit unavoidable from the doctor’s perspective) has shut down several economies around the world, as populations isolate themselves in their homes. That this will result not only in a global recession and reduction of incomes because of sharp falloffs of both demand and supply, but also a decline in global trade flows across virtually every sector imaginable, including in the health sector.

Compared to earlier years, there had been an increase in protectionism worldwide in the aftermath of the last G20 Leaders’ Summit. The World Trade Organization (WTO) last year noted that world trade is continuing to face strong headwinds in 2020 after already growing more slowly than expected in 2018 and 2019. This was estimated before the existence of Covid-19. In 2019, the volume of global trade of goods and services grew at its slowest pace in a decade, by just 1.5%. Global trade went into recession by end-2018, exiting negative territory only in the fall of 2019. This means that with global trade already plummeting, Covid-19 will further exacerbate the trade scenario because this restricts mobility.

During the last three months, there have been drastic confinement measures that were initially centred in China, and soon sent ripples across the global trade in goods and services, especially in travel and transport; and disturbed manufacturing supply chains all over the world. As confinement measures are rolled out to Europe (mainly Italy, Spain and France) and the US, too, trade will also be ‘quarantined’ in 2020 to a significant extent.

Over a quarter, taking into account a progressive return-to-normal scenario, the cumulative losses would reach US$ 1,164 billion. Therefore, it is cogently anticipated that a recession in trade in goods and services is going to occur. This slowdown will bring the annual global trade growth figure to -4.5% in 2020.

According to the above graph, all five nation’s monthly imports from January 2020 to February 2020 significantly plummeted due to lockdowns and closed global borders. In just one month of impact, import figures of selected countries got reduced. This means that global trade figures of March will be even lower.

Protectionist policies taken by the US could ironically serve to cripple its fight against the Covid-19 pandemic. President Trump implemented his “phase one” trade agreement with China during mid-February 2020. US administration  has announced a slash in import tariffs on medical products coming from China, but additional tariffs worth of US$ 360 billion of imports from China still remained. This trade war continues to hinder the availability of medical products. By mid-march, US$ 1.1 billion of imports  by USA to potentially treat Covid-19 remained subject to 25% tariffs. Under Trump’s authority, import duties on US$ 3.3 billion of imports of other critical health care products were cut to only 7.5% from 15%, instead of straightaway slashing down to 0%.

Now, economists and policymakers expect that the scenario of global trade might worsen in coming months. A major factor, which corroborates this argument is the reduction in global demand for major products. For instance, according to Indian exporters, there is a drastic decline in the enquiries from foreign buyers and no fresh orders have been placed for major consumable products in the past three weeks from the Middle East.

Traders are yet to resume work at import hubs in a full-fledged manner including at major hubs like Singapore and Hong Kong. Issues such as non-availability of container ships have and will continue to hurt exports. Everyone’s attention is geared towards fighting the virus, which is making traders, including importers in Middle East and other places jittery when it comes to demanding consignments. The Covid-19 crisis had caused dramatic supply and demand shocks in the world economy, and these shocks are inevitably causing major disruptions to trade. This will worsen the plight of stakeholders.

Several countries have closed all businesses except grocery stores and pharmacies and have locked down many of their citizens within their homes. Also, many economies including South Asian countries, entire EU, Canada and the United States have closed their borders to non-essential traffic. So, to anticipate the impact on global trade, some lessons from last decade’s global recession (subprime crisis) can be learnt and observed. The precedent of the 2008 financial crisis suggests that international trade will be hit exceptionally hard by these containment measures, even though there are limits to the parallels we can draw.

In 2009, global trade crumbled by nearly 10%, exceeding the fall in global GDP by a factor of five. The reasons for this “Great Trade Collapse” were twofold. On the demand side, households reacted to the economic downturn by disproportionately postponing the purchase of durable goods such as cars and home appliances, which are more heavily traded than non-durables and services. On the supply side, exports were more susceptible to financial shocks than domestic sales. Now, in this case there is an additional alarming parameter, which is mobility restrictions impacting shipments. Thus, this will bring even greater loss in global trade as there is direct threat to human life and medical costs. Since major economies will practice import substitution, due to the threat of the pandemic, it is normal to expect that in the next six months to one year, global trade will be significantly enervated.