• Despite stable and significant production, India imported US$ 43.48 million worth of turmeric in 2018-19, increasing from US$ 9.4 million in 2013-14.
• The extraction and food processing (blending) industries are among the biggest consumers of turmeric. The percentage of curcumin and oleoresin content in turmeric determines the demand by the industry along with the price.
• India is witnessing a major surge in imports of turmeric over the past few years, which may hurt the interests of turmeric growers. So it is a critical issue to be addressed through policy intervention.
• Towards this objective, adoption of scientific cultivation practices, GAP, IPM, etc., focus on increasing area under cultivation with high curcumin content of turmeric and devising a mechanism to control price fluctuation will go a long way. 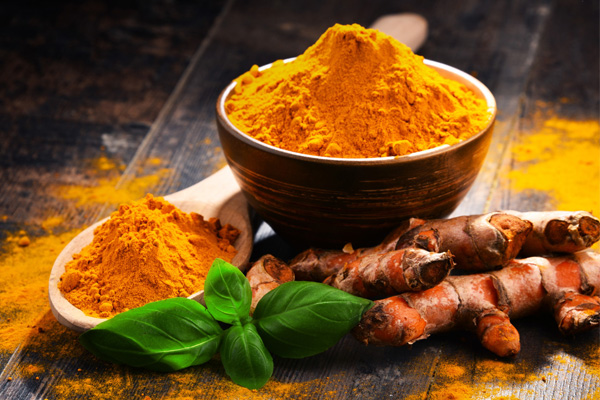 The increase in exports can be attributed to growth in production and strong demand by USA, Iran and Morocco.

The increasing demand for natural products as food additives makes turmeric an ideal candidate as a food colorant. Various medical researches have demonstrated the anti-cancer and anti-viral activities of turmeric, leading to an increase in demand for turmeric in USA (Anne Plotto, 2004). The total production of turmeric in 2017-18 was 946,650 tonnes in India and the top producers were Telangana, Maharashtra and Tamil Nadu (APEDA). 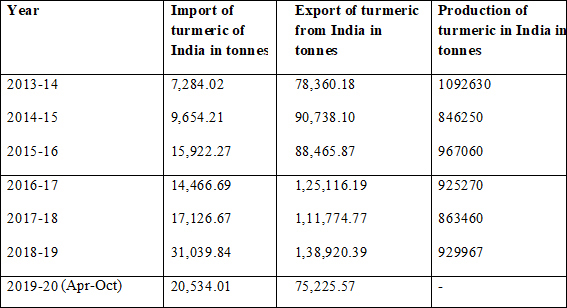 Turmeric imports by India are primarily attributed to three factors. Based on industry inputs, the most important factor is price difference between the domestic and international turmeric. As per  Tamil Nadu Agricultural University (TNAU), the percentage content of curcumin, dark yellow color, oleoresin and essential oil etc. present in a specific variety of turmeric is also an important factor for the preference of the variety. The seasonal volatility in yield of turmeric is mainly influenced by the rainfall and other climatic factors. There exists volatility in turmeric production of India based on climatic factors (Angels et al. 2011).

Production volatility is the other factor that impacts the import of turmeric. Various statistical studies have analysed that the area under production and productivity for turmeric has been on a steady rise (Krishnadas, 2010). Hence on an average, production volatility may not be attributed as the key reason for imports.

On analysing the three factors one by one, one may affirm that seasonal volatility cannot be attributed as the principal reason for the surge in import because, over the years from 2014-15 to 2018-19, the production has remained in the range of 846,250-967,060 tonnes. The difference in the range as a percentage change between the highest and lowest production from 2014-15 to 2018-19 is only 14.6%. The year-on-year percentage change of production shows that from 2017-18 to 2018-19, the production increased by 7%, while the import still grew by 52% in terms of value rather than declining as shown in table 2. 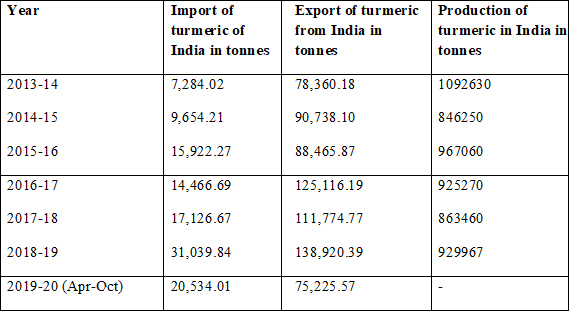 The other two reasons i.e. price differential and the quality based on the content are interrelated. As per industry inputs, the difference in price is because of the premium fetched by Indian spices in the global market traditionally and the quality of the turmeric produced in India. TNAU confirms that the major varieties produced in India are Madras and Alleppey. The other variety Lakadong, grown in north eastern India, has curcumin content more than 5%. The main hurdle to turmeric export has been the non-uniformity in quality during the post-WTO period.

The extraction and food processing (blending) industries are among the biggest consumers of turmeric. The percentage of curcumin and oleoresin content in turmeric determines the demand by the industry along with the price. As per industry inputs, price of turmeric in domestic market is approximately Rs. 117 per kg as against the imported turmeric priced at Rs 87 per kg.

Indian turmeric has the highest curcumin content on an average as per TNAU and industry inputs, however owing to low prices, there has been a consistent demand for imported turmeric from Ethiopia and Myanmar over the years. Recently the top spot in terms for the biggest exporter of turmeric to India was taken over by Vietnam as per table 5. 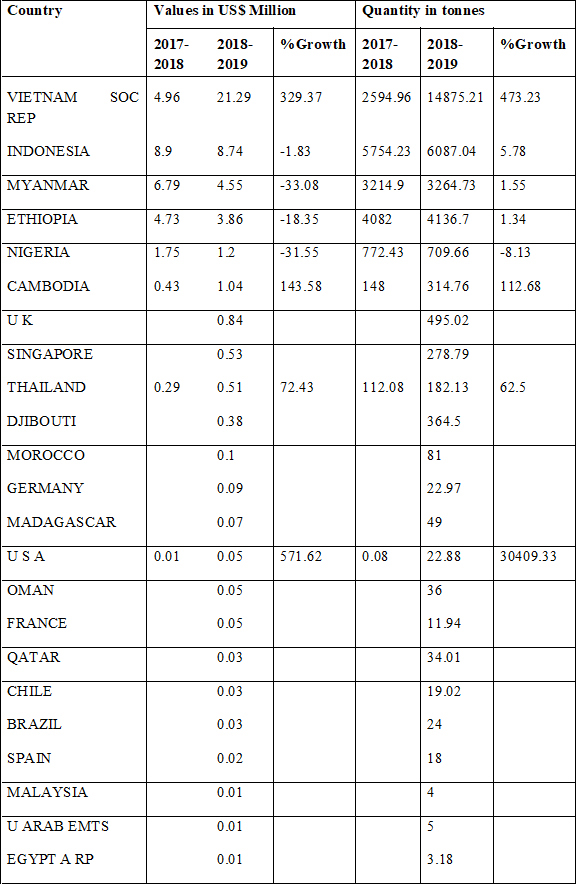 Hence it is imperative that the government should take pre-emptive measures to arrest distress among the turmeric growers in coming future as the sudden spike in import may hurt the interest of growers.

The turmeric industry faces two key challenges one is the stupendous rise of Vietnam in terms of export of turmeric as evident from the fact that export of turmeric from Vietnam grew from 4.5 million worth in 2017 to 22.8 million in 2018, without concomitant increase in import, which shows that the surge in export is not a temporary phenomenon based on import and re-export but based on sustained capacity development (UNcomtrade). Hence Vietnam may soon emerge as a competitor. Second is the production- import alignment, such that the interest of growers as well as processors/extractors is catered to and the mismatch in quality/price expectations is addressed.

The biggest lesson is that the pre-emptive measures based on the production cycle should be an important policy intervention as part of agriculture export policy, because it not just supports farmers against price crash but also equips the government to better handle agricultural crisis. Policy proactiveness is indispensable to minimise the impact of production-demand mismatch. The looming distress is just round the corner for turmeric industry, hence timely intervention to restrict the import only up to the production-demand mismatch is the best way forward.

The key focus should be on two important factors – oleoresin or curcumin content of turmeric and turmeric yield i.e. production per area under cultivation. The adoption of scientific cultivation practices, GAP, IPM, etc., focus on increasing area under cultivation with high curcumin content turmeric and devising a mechanism to control price fluctuation in annual spices’ crops will go a long way in addressing the challenges faced by turmeric producers and exporters.

Enquiry for Why India’s turmeric industry needs a healing touch