• The US Trade Representative recently put a number of countries including India in its list of developed countries under its counter-vailing duty laws.

• The change will reduce the threshold for subsidies to initiate counter-vailing duty investigations for India from 2% to 1%.

• US has considered share of global trade and membership of G-20 as criteria for classifying India as developed, while ignoring that the latter’s per capita GNI is well below the threshold of US$ 12,375 for developed countries.

• This arbitrary re-classification based on selective and incorrect interpretation of data is not a healthy sign for a rapidly weakening multilateral trade ecosystem. 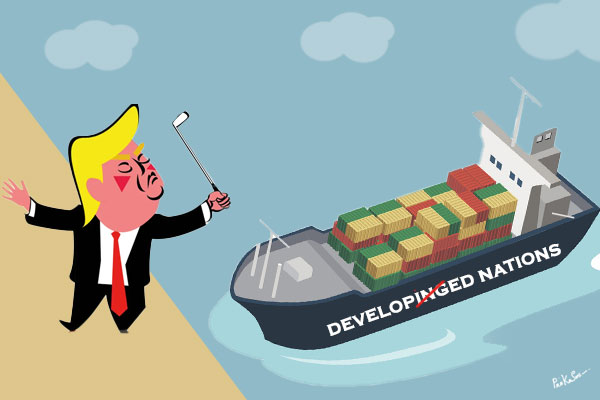 The term ‘stuck in the middle’ seems to apply quite well to people as well as countries. The middle class in any country often laments that it gets the short end of the stick when it comes to government policies. But how would they feel, if in their present levels of income, their government were to redefine the definitions of economic classes and place them in the ‘rich’ category, with associated tax implications? On being asked why, what if they said that it’s because “you crossed the minimum level of share of national consumer spending as defined for the middle class last year”?

Something similar seems to have happened recently in the US (at a ‘country’ level), which decided to end the developing status of a few countries, including India for treatment under counter-vailing duty laws, on February 10. Under the WTO Agreement on Subsidies & Countervailing Measures (SCM Agreement), the US is obliged to provide special treatment to imports of countries that have not yet reached developed status. There are different thresholds to determine “whether countervailable subsidies are de minimis and whether import volumes are negligible”. Essentially, a developing country is immune from countervailing duty investigation if the subsidies provided are less than 2% of the total value of imports from that country. But for a developed country, the threshold is 1%.

So from the US point of view, India is now officially a developed country. The release of the US Trade Representative (USTR) states that it has “considered appropriate economic, trade, and other factors, including level of economic development of a country”.

The first criteria is share of world trade. Earlier, the US Trade Representative considered a share > 2% as a reasonable benchmark for classifying a country as ineligible for developing country benefits. In its recent ruling, that has been revised to 0.5%, as “relatively few countries (now) account for such a large share (i.e., more than 0.5 percent) of world trade, and those that do include many of the wealthiest economies”. Here, India crosses both thresholds with a share of 2.1% of global exports and 2.6% of global imports last year (merchandise +services). The second criteria is membership of forums like EU, G20 (of which India is a member) and OECD.

India scores a tick on both these boxes, but the real problem comes with the third one. The World Bank defines developing countries as ones with per capita GNI less than US$ 12,375. India comes well below this threshold with a per capita GNI of US$ 2,020 at current US dollar in 2018. This implies that India is classified in the World Bank’s ‘lower middle income’ category. But USTR is curiously ambiguous in concluding that countries like India with a share of over 0.5% of global trade and membership of G-20 are developed despite having GNI below this threshold.

When a country crosses the per capita income threshold of US$ 1,000, it can be subjected to countervailing duties by importing countries and also face a challenge on its export subsidies. Prof Manoj Pant, Director, IIFT, explains the dilemma to TPCI thus:

“The US is justified in challenging some export subsidies and/or putting in countervailing measures. Export subsidies are also subject to market share definitions depending on the product being considered.  The US decision of declaring India a non-developing country is of course entirely arbitrary but it is the part of the general issue of a challenge by the US to classification of developed and developing countries. This classification (which is arbitrary and not defined) has been raised since the Cancun Ministerial when there was an attempt to define countries for the purposes of a time table for reducing tariffs on agricultural products when and if the ‘peace clause’ is removed.”

Besides being weak on logic, US assertions on the development status of India further complicate the bilateral trade equation before the two sides actually get around to sign a trade agreement. Firstly, it renders the discussion on India’s eligibility for GSP benefits (withdrawn last year) pointless. Secondly, it limits India’s ability in terms of the quantum of subsidies it provides to its farmers in their present form, at least in the context of the US. While India has filed a counter appeal to the export subsidy case it lost to the US in the WTO, the process is stuck due to the Appellate Body now being rendered dysfunctional.

“Technically three things have to happen before India gets worried (on WTO developing country status impacting farm subsidies): ending of ‘peace clause’  regarding retaliation in agricultural trade, market share proof in the case of Indian exports and proof that India’s agricultural subsidies qualify as export subsidies. India mainly provides subsidies to agricultural producers under the domestic MSP programme, which is a price support programme. At the Doha round, it was determined that in poor countries like India, these kinds of farm subsidies would be part of a domestic development agenda and not trade related. However, in the coming years once the WTO is reactivated, these issues are likely to be raised again.”

In such a scenario, the way forward is definitely to re-evaluate its approach to subsidies, as Dr Arpita Mukherjee, Professor, ICRIER, agrees:

“We cannot and should not give prohibited subsidies. We should give WTO-compliant subsides. Every country gives subsidies. Hence, the issue it that we have not smartly designed our subsidies.”

Judging a country’s developing status is tricky and prone to misinterpretation. This is even a topic for a World Bank blog in 2015, which suggested removing the developing country phrase. The IMF recognizes 39 countries as Advanced Economies and the rest as developing in its World Economic Outlook 2019. It states, however, that this is not based on any strict economic/other criteria, and has only been done to facilitate analysis and meaningful organisation of data. The UNDP has a possibly better approach with its Human Development Index based on factors like income, education and health.

However, from the perspective of trade, it remains relevant as ever. A country like India is progressing on some criteria, generating increasing numbers of millionaires and also building world class cities. But it has a long way to go when it comes to providing sustainable living standards to the masses, which is indicative in its rank of 129 on the Human Development Index. Arbitrary mechanisms to unilaterally change the definition of ‘developing’ via selective interpretation of data by the US is clearly not a healthy sign, in an already struggling multilateral trade ecosystem.