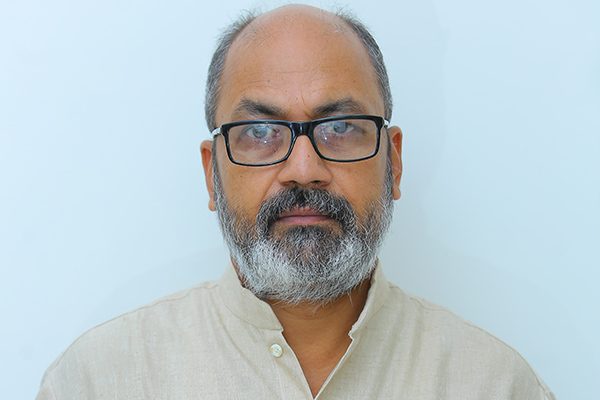 TPCI: What are the reasons for the large scale exodus of migrants from cities like villages? How do you see near term impact of this on India’s urban economy after the lockdown is lifted?

Prof. Brajesh Jha: The exodus of migrants in light of the lockdown was not incomprehensible. Any significant government assistance other than the free ration did not precede the announcement. The announcement was surprising and unprecedented for most people. Free ration is meaningless for many migrants. In subsequent days, additional assistance (doles) was announced by the central government.

The exodus was followed by unambiguous assurances from state governments in relation to availability of meals (two times a day) for the needful person. Subsequently voluntary organizations, along with police personnel, also stepped up. Kindly note that most of the migrant workers, who were going back were either casual workers or workers of unorganized sector living on a monthly salary of less than Rs.10,000. Hardly do they have adequate reserves to sustain themselves (even) for 15 days. Most of them live in rented accommodations. Expenses on rent are an important part of their expenditure and it is not easy for these expenses to be exempted, even at the behest of the Prime Minister.

Many of the migrants come to cities while leaving behind their immediate family members; expectation of meeting them is therefore paramount for these workers.  Some of these migrants are also landholders, though owners of very small piece(s) of land. In this light, perhaps it would be easier for them to sustain themselves in their villages; in familiar surroundings rather than a hostile city.

The exodus was large as migrants now account for a significant proportion of workers in Indian economy. It seems more than one-third of workers in India are internal migrants. They are the backbone of development of many cities in the country. They would remain so even after the lock down is lifted, since most of them are distressed migrants. They would return to work, though the process will be slow and staggered over the period. The periodicity will vary as per their urgency. It will also depend on favourable response from their network.

TPCI: The large scale migration appears to support the view in favour of large scale decentralisation of Indian Economy so that people in remote areas need not migrate to cities. What is your perspective on this?

Prof. Brajesh Jha: The merits of large scale decentralisation of Indian economy cannot be understated. The policy for KVIC (Khadi and Village Industries Corporation) immediately after independence, the policies for development of towns and cities, growth centres before trade liberalization suggest the above. However, with trade liberalization, competition and costs become the most important. With the success of China, mega-clusters as a method for industrialization were also recommended for India. Even in such a period, the merits of decentralization have not lost their sheen for many researchers.

IEG Working Paper no 310 argued for decentralization of industries and economy (way back) in 2010. This working paper in the background of NCEUS (National Commission for Enterprises in Unorganised Sector) report suggests for micro-level clusters for primary resource-based capital intensive manufacturing activities and separate micro-level clusters for manufacturing of artisan work. This also suggests for “rural clinics” to catalyze growth of such industrial activities.

TPCI: How can rural India’s contribution to current GVA be augmented? And what role do you see for rural India in development of the economy in farm and non-farm sectors?

Prof. Brajesh Jha: Rural India has comfortably been divided into farm and non-farm sectors. However, with decreased inland holdings, farmers have been increasingly dependent on non-farm sources for their livelihoods. In fact, in dearth of adequate non-farm opportunities in their surroundings, land holders often migrate to cities, leaving behind their lands in a sub-optimal way. The IEG working Paper – 375 describes one of such sub-optimal way.

The farm and non-farm sector to a large extent are complementary to each other. A better performance of one (agriculture) depends on robustness of the other (non-farm sector). However, the NSS Assessment of farmers’ situation shows that contribution of rural non-farm business in an average farmer’s income has declined in the recent period (between 2003 and 2013). A higher contribution of agriculture in economy would also depend on better performance of rural non-farm sector in economy.

The improvement in farmers’ situation requires an increased role of rural sector in the economy. Transfer to rural economy is important, and it is happening in India but it has had its limits.

TPCI: What should be done to facilitate industrialization and development of rural regions in India? What are the key sectors that should be developed to promote gainful employment?

Prof. Brajesh Jha: Besides agriculture and similar primary resource-based allied activities, rural vicinity (hinterland) have an advantage in processing/manufacture of agriculture based commodities. Following robust growth in agriculture and certain manufacturing activities, growth in other sectors of economy (trade, transport and services) would take off. Industrialization and development of rural regions depends to a large extent on urbanization, especially rural town or similar small towns available for rural trade and services. Agriculture also requires a market, which can be approached from many surrounding villages. Urbanisation is so much integral to development of rural regions that often it is discussed on the basis of population/area/villages per town.

The key sectors in organic manufacturing, which can be prioritised in rural vicinity, are manufacture of wood implements, furniture, bamboo and cane article, wood  carving, stone carving, leather objects, footwear, embroidery and embossing of lather article, processing of agri-based products, waste based processing (paper from water hyacinth, crop residue based items and like), etc.

TPCI: What suggestion would you like to offer to the government or private players to make sure that the rural economy becomes as vibrant and attractive for job seekers?

Once the basic infrastructure has been developed, infrastructure specific to (certain) industries and facilities would take off. Examples of these include storage, cold chain and processing facilities. Additionally, infrastructure in nature of public goods can be created by private players, but government has to play a proactive role in such a private initiative. The development of market yard and facilities in market, waste management are some examples.

In order to reduce cost incurred in proliferation of (such) infrastructures and to harvest other advantages, the cluster approach of industrial development was adopted in India in the seventies. Subsequently clusters of many commodities, at times with different objectives were developed. More of such clusters and industries may be initiated in a region after assessing the geographical strength. The recent budget announcing identification of produce in each district is a step forward in strengthening need based specific infrastructure and clusters in a region.

In addition to these, pro-active role of state governments in facilitating private investments and improvement in law and order remain important.

Prof. Brajesh Jha: Historically Japan, Taiwan have been examples of decentralized industrialization. In many Southeast Asian countries like Indonesia, Malaysia, Philippines and Thailand, industrial development is intricately related to the agriculture sector in the rural surrounding. Though China is known for some mega-clusters, the town and village enterprises are example of decentralized industries in rural vicinity of China. Nevertheless, in few transnational economies of mainland Southeast Asia (like Vietnam), farm and non-farm sectors are growing in tandem. Since India consists of many states, and situations in each of these states vary, to find an international model that can be emulated in India is extremely difficult. The growth of many vibrant urban regions (towns and cities) is key to decentralization of economy.

Brajesh Jha, Professor of Agriculture Economics has more than 25 years of post-Ph.D research experiences in issues related to Agriculture and Rural Development. His substantial work relates to farming system research; risk, uncertainty and sustainability of agriculture; commodity specific analysis of WTO agreements on agriculture; sources of growth in agriculture; supply chain analysis of some agricultural commodities like litchi; employment in agriculture and rural non-farm sectors; activities allied to agriculture, evaluation of price support and rural works programme in India. His works are presented in books, edited volumes, IEG working papers, economic-dailies, monthlies and more than 50 research articles in professional journals.

Enquiry for “Urbanization is integral to develop rural areas”