Rupee decline vs dollar: Should India be worried?

• The Indian rupee declined to 77 vs the US dollar on April 21, compared to 71.51 on February 19. This is by far the lowest value of the rupee against the dollar, which comes in the backdrop of a weak global economy amid the Covid-19 pandemic.
• Emerging market currencies have been slammed by the capital flight against the dollar in 2020 post the Covid-19 pandemic, but India’s rupee has been relatively less volatile despite the large pull out by foreign portfolio investors.
• India witnessed about US$ 14 billion in withdrawals in March, both in debt and equity; which was the largest ever foreign portfolio outflow from India.
• High foreign exchange reserves are a good cushion as of today, keeping rupee in a relatively better position than other currency of emerging economies. 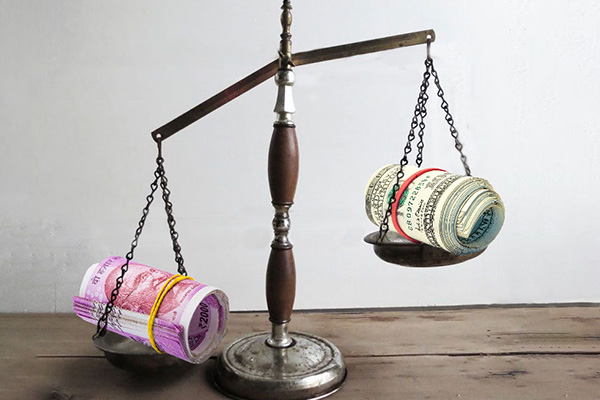 The Indian rupee has been suffering reversals since the early days of 2020, and the trend has continued during the present Covid-19 crisis.

Before analysing the trends of rupee depreciation against the dollar, let’s compare the current rupee-dollar equation with previous figures. If we see the values, one US dollar was equivalent to INR 71.51 on February 19. On April 21, the rupee touched a historic low to 77 vs the dollar. A preliminary assumption would obviously attribute this drop to the Covid-19 criris and its impact on the global economy. But it might not be that simple.

Firstly, it is important to understand the behaviour of foreign investors across globe and thow their mindset operates. US, Singapore, Mauritius, Hong Kong and China have remained the preferred investing destination for short term and volatile investment. India too, has emerged as one of the preferred destinations for investment mainly in the last one year, as its forex reserves have burgeoned significantly. In the past ten months, India’s forex reserves have gone up by US$ 55 billion to reach US$ 479.6 billion on April 17.

This increase in India’s foreign reserve is largely because of volatile short-term investments known as FPIs. During any uncertainty period, economic turmoil, crisis phase or pandemic phase where investors lose their confidence, they pull out their short-term or volatile capital in a quick span of time. This concept in international economics is known as capital flight. An instance of such capital flight is Mexico, which faced political turmoil when a senior political figure was assassinated.

Due to the current pandemic, Indian forex market is experiencing a similiar scenario. Dollar inflows into financial markets are often called ‘hot inflows’ because they get in and get out very quickly. When the dollar inflows come, the currency of the receiving country generally appreciates and gives a feeling of safety and security from any external shocks. However, when the outflow happens, the currency depreciates in quick succession, leaving it in a vulnerable situation. India witnessed about US$ 14 billion in withdrawals in March, both in debt and equity, which was the largest ever foreign portfolio outflow from India, double that of outflows witnessed in June 2013 during the taper tantrum.

Other Currencies Are Falling Too

Emerging market currencies have been slammed by the capital flight against the dollar in 2020 post the COVID-19 pandemic, but India’s rupee has been relatively less volatile despite the large pull out by foreign portfolio investors. Among emerging market currencies, the South African rand that fell 23.78% and the Brazilian real, which plummeted 21.94% were some of the currencies that have taken a major blow in 2020 so far. Among other worst hit currencies were the Mexican Peso (-19.50%) and the Russian Ruble (-15.09%) also feature on the list.

Thus, it is not correct to blame rupee or monetary policy for continuous depreciation. In fact, RBI in its current monetary policy tried to provide a stabilizer by cutting the CRR by 1%, which will release Rs 1.45 lakh crore into the economic system, thus trying to maintain the demand side. This will slow the pace of rupee depreciation if happens as demand might expect a small surge.

Why Oil Price Crash is Not Helping Rupee?

While low oil prices promise well for India’s trade balance, the rupee has not taken any comfort from them yet. In fact, the domestic currency has begun to react favourably to any recovery in crude as seen in past weeks. Actually, the crash in crude oil has prompted global investors to seek relief and take opportunity by redirecting volatile investments in the safe haven i.e. US dollar, placing the rupee and several other currencies on the backfoot.

Also, the enervated crude oil demand in India due to lockdown has not shown benefits in terms of plummeting crude price. Now the argument is pretty straightforward – if only oil was down, it would have been positive for the INR (rupee). But the capital outflow and its negative impact on rupee are outweighing the positive impact.

India should be ready for further rupee depreciation

Analysts and experts expect the rupee to further depreciate because of the economic slowdown, which will pretty much continue post pandemic. As advanced economies like US and EU are offering trillions of dollars to revive their economy, our government expenditure may overshoot the deficit by borrowing more to respond to Covid-19 risks., which may hamper our current account deficit and fiscal deficit. On the other hand, tax collection will be squeezed significantly, which will again reduce the degree of freedom for government to spend.

Henceforth, given the grim economic picture, some currency market players expect the rupee to fall to a low of 78.50 a dollar in the near-term signalling that pulling out of capital could continue. But so far, the high foreign exchange reserves are a good cushion as of today, keeping the rupee in a relatively better position than other emerging market currencies.

Enquiry for Rupee decline vs dollar: Should India be worried?