• At a time when COVID-19 has left its nefarious footprints across the planet, its ripple effects are making their presence felt in the Indian gems & jewellery sector.
• Total gross exports, including cut and polished diamonds, are estimated to have slipped to US$ 1.5 billion in March, a year-on-year decline of 56.4%.
• In India, too, retail sales of gems and jewellery are estimated to have plummeted by 80% in the first 10 days of March due to the pandemic.
• However, the long term prospects of the gems and jewellery sector remain positive, owing to growing consciousness of branded jewellery, increasing purchasing power in tier II and III cities, increasing working women population and rising preference towards diamond jewellery. 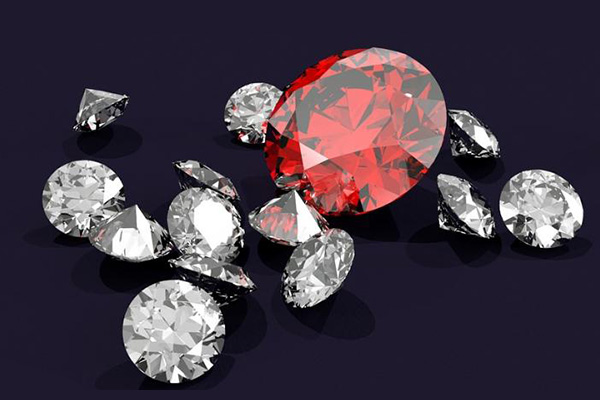 At a time when Covid-19 has left its nefarious footprints across the length and breadth of the planet, there’s hardly any aspect of life which has been left untouched by it. Be it working from home or maintaining social distancing or becoming thrifty in household finances, the pandemic have made ripples in our daily lives.

This unprecedented health exigency is also taking a toll on the world economy and trade & commerce. One domino effect of this development is evident in the context of India’s gems & jewellery sector, which employs around 4.5 million people and contributes about 7% to India’s GDP.

According to a recent report by the Economist Intelligence Unit (EIU), the global economy is headed for a tough time. “The global economic picture is looking bleak, with recessions in almost every developed economy across the world. We assume that there will be a recovery in the second half of the year, but downside risks to this baseline scenario are extremely high, as the emergence of second, or third waves of the epidemic would sink growth further,” according to Agathe Demarais, Global Forecasting Director. Among the G20 countries, for example, some of the nations which will experience the worst contractions include Italy (-7%), Germany (-6.8%) and Argentina (-6.7%) followed by Brazil (-5.5%), Mexico (-5.4%), France (-5%), Saudi Arabia (-5%), UK (-5%) and US (-2.2%) in 2020. Closer home, albeit the Indian economy is likely to be battered by the Coronavirus pandemic this year, it is still likely to be better off than all other G20 countries and will register a growth of 2.1%. 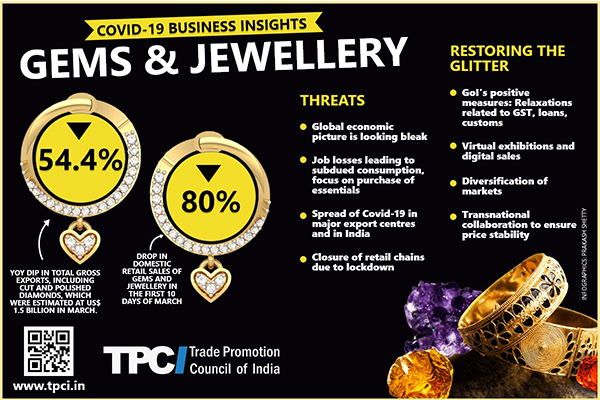 According to a recent note from the International Labour Organisation titled ‘Covid-19 and the World of Work: Impact and Policy Responses’, the world’s workers are reeling from the initial shock of the coronavirus recession. The report estimates that about 25 million jobs will be lost worldwide as a result of Covid-19. At a time when a significant chunk of workers in the world are being laid off, this would lead to consumers becoming frugal in terms of their spending and shelling money only on those things that are absolutely necessary for them. In fact, such a trend is already quite evident when it comes to sectors like gems and jewellery.

The Gem and Jewellery Export Promotion Council (GJEPC) asserts that India’s gems and jewellery industry has faced a huge setback after the outbreak of coronavirus (Covid-19) disease and the subsequent national lockdown with exports in March declining by half. The sector, which was already reeling under the economic carnage caused by this deleterious disease. There has been a year-on-year decline of 56.4% in this segment as the total gross exports, including cut and polished diamonds, in March are estimated to have slipped to US$ 1.5 billion against US$ 3.44 billion a year ago.

This can be attributed a string of other developments too. The main export destinations for India’s gems and jewellery are the UAE, US and Hong Kong. The virus spread to all these regions in February. The complete shutdown in Hong Kong, a major trading hub for gold and diamond jewellery exports from India, hit the industry back home hard. Moreover, the spread of the virus could has led to the cancellation or postponement of major gems & jewellery shows, further impacting the prospect of trade. For example, the HKTDC Hong Kong International Diamond, Gem & Pearl Show 2020 (originally scheduled for March 2-6, 2020) and the HKTDC Hong Kong International Jewellery Show 2020 (originally scheduled for March 4-8) have been rescheduled to May 18-21, 2020 for the time being.

In India (poised as the world’s second-biggest gold consumer) too, retail sales of gems and jewellery are estimated to have tanked by 80% in the first 10 days of March due to Covid-19 pandemic. This is not surprising since this crisis comes at a time when the economy is heading for its slowest pace of growth in 11 years. It is expected that the country’s domestic retailers are likely to face loss of revenue, stress on profitability and lengthening of operating cycles, which could further dampen their borrowing abilities in the future.

Indian players are positive of a speedy revival of demand once the crisis is resolved. “When people are denied ability to purchase, there is pent-up demand. In China, we have noticed a gradual improvement in business in March. We have seen strong self-purchase sales better than year-earlier levels in Mainland China after the lockdown ended. This teaches me that people are resilient and will continue to desire things as they did before the lockdown,” observed Stephen Lussier, executive vice-president, consumer & brands, De Beers. He reverberated a similar confidence in the context of Indian diamond traders too.

A number of measures have been taken by the Government of India to provide a cushion to the Indian industry to tide over this black swan event. For example, the last date for filing GST returns for March, April & May 2020 was extended to 30th June 2020 from March 31, 2020; the interest on delayed TDS deposited was also reduced from 18 to 9%; and last date for filing Income Tax Return for 2018-19 was extended to June 30, 2020 from March 31 and interest on delayed payment of reduced from 12 to 9%. Further, to help MSME units, threshold limit for Bankruptcy increased from Rs 1 lakh to Rs 1 crore; and bank charges were reduced for digital trade transactions.

A critical step forward for the industry in this situation is to actively engage with  with different trade bodies across the world and industry apex organisations and brainstorm on the steps to ensure that supply and demand equilibrium and price stability is maintained. Further, instead of keeping all the eggs in a few baskets, the industry must consider diversifying the markets that it caters to and tap new territories like Russia, Japan, UK and so forth. While trade fairs become untenable at present, the industry could use webinars and virtual exhibitions to explore new markets and reach out to buyers.

Finally, as far as the domestic market is concerned there are hopes that the pandemic will end by the arrival of festivals like Dhanteras and Diwali and signs of recovery will become to appear. However, social distancing may become the new normal by then. To tide over this challenge, retail stores in the country need to think of innovative solutions such as promotion of video-based selling of ornaments to avoid crowds at stores when the lockdown to contain the coronavirus ends. Jewellers are also offering discounts on gold rates, ornaments and making charges, besides offering buybacks. The long term prospects of the gems and jewellery sector remain positive, owing to growing consciousness of branded jewellery, increasing purchasing power in tier II and III cities, increasing working women population and rising preference towards diamond jewellery.

Enquiry for Gems & jewellery: Bracing for a new terrain