India, one of the largest rice producers, has experienced an exponential surge in the exports of its non-Basmati rice to newer regions like Southeast Asia, despite the challenges posed by the pandemic. Retaining its hold over these new markets is dependent on prices in competitor markets and how well India manages the second wave. 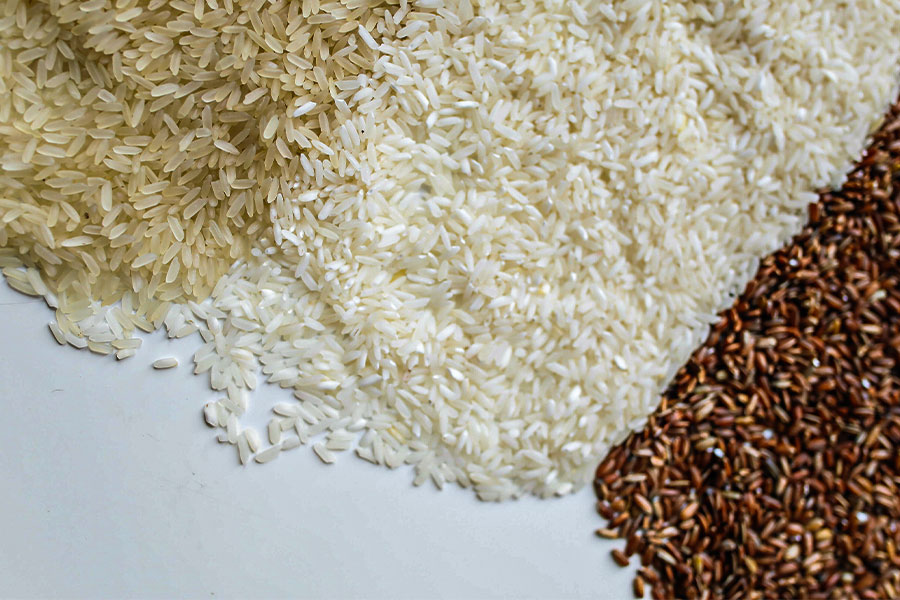 Rice is among the agricultural products in which India is the top exporter in the world, with Thailand securing the second rank. It is interesting to note that the year of pandemic, 2020, has brought new highs for rice exports from India. The value of rice exports for India increased by 17.34% during 2020, in comparison to 2019. In terms of quantity, the exports of rice reached their highest level in the past ten years.

During the period January-March 2021, the total exports of rice amounted to US$ 2.78 billion, growing by 41.52% yoy. However, it needs to be noticed that exports of non basmati rice expanded in 2020 reaching US$ 3.64 billion, growing by 64% in comparison to 2019. Exports of Basmati rice, on the other hand, declined to US$ 4.34 billion in 2020, contracting by 6.2%. Similarly, during Jan-Mar 2021, exports of non-basmati experienced an increase by 199.4% year-over-year (YoY) while basmati rice witnessed decline of 23.21% yoy. This article focuses on India’s widened reach in the international market for rice during the period 2020 onwards. 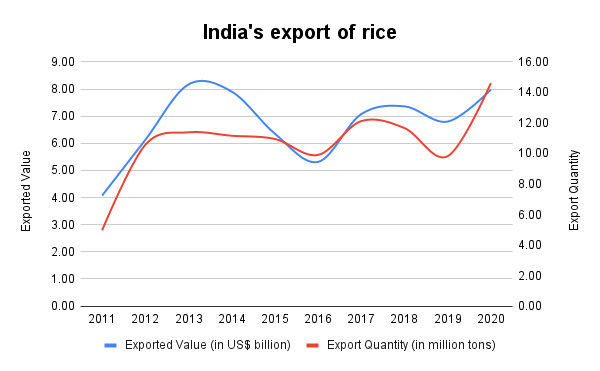 There are certain markets in which India’s rice exports rose exponentially last year.  One such market is the Southeast Asian region, where India exported US$ 299.45 billion worth of rice in 2020, increasing by 121% over 2019. In terms of quantity, the export of rice increased by 216%, reaching 631 thousand tons in 2020. The table below shows some of the countries in the region where exports increased in 2020 in comparison to average exports to these countries during 2015-19.

One of the reasons for the exponential increase in demand is the limited supply of rice by other major rice exporters. Drought in Thailand slashed its output. According to data from UN Comtrade, exports from Vietnam, the third largest exporter of rice, fell to US$ 1.8 billion in 2020 from US$ 2.43 billion, as the country witnessed low output level. Impact of shortage in supply also transmitted into export prices of rice from these countries, further contributing to India’s thriving exports.

The exported unit price of rice in Thailand was US$ 648/tonne in 2020 while that in India was US$ 546/tonne. Due to the competitive prices of Indian rice, Vietnam had purchased rice from India for the first time due to limited supply in domestic markets. According to FAO food price index, September’ 2020 onwards the international prices for cereals have been ruling at highest levels since 2015, currently at 125.1 for April 2021.

Furthermore, exports and PDS offtake in 2020-21 were also remarkably high in the Indian market for wheat and rice, implying surplus production during the year. This allowed the country to meet the high demand on the back of competitive prices. Adding to this, depreciation of rupee has also made export conditions more favourable. Farmers have been able to export at lower prices due to depreciation translating into higher margins.

Further, the favourable conditions also led to access to markets such as Angola and Tanzania among others both in 2020 and 2021. New markets such as Peru and Argentina have also granted access to the Indian rice in 2021.

Are the exports going to sustain?

All depends on how quickly and how well India manages the second wave, progress in vaccination in India and worldwide, and the momentum in the global economy in the coming quarters.

This time, during the second wave of the COVID-19 pandemic, even the rural sector has not been spared. Figures from CRISIL report show that in the rural sector, the COVID-19 cases have increased rapidly, with the rural sector comprising 30% of the total cases in India in April’ 2021 from 21% in March’ 2021. This can have an impact on the supply, as sowing of rice in India is mainly done from May end to June. The main states for production of rice have been under the grip of second wave i.e., Andhra Pradesh, Uttar Pradesh, West Bengal etc. Commenting on the situation of rural areas, Dr. Rajeswari Sengupta, Prof. at IGIDR, comments:

Kharif crops are usually sown in the May-June period and if that gets disrupted due to the pandemic in a severe manner, then this could lead to supply shortages down the road. It all depends on the extent of severity of the pandemic in agricultural regions.

Demand also depends on prices and production from other competitors. Abhinav Goel, Director, Shree Krishna Rice and Gen Mills, opines, “In future, while Indian prices are expected to be at the same level, the prices in the competitor markets will determine the demand for Indian rice.”

The US Department of Agriculture (USDA) expects rice production in Thailand to recover 12% in 2021-22 (Aug-July), with expectation for a rise in exports to be gradual. Owing to the competitive prices of Indian rice, importers such as the Philippines are planning to buy from India, instead of Southeast Asian countries, implying consistent demand for exports. Commenting on access to the Southeast Asian markets, Abhinav Goel added:

These markets depend on Thai rice and Vietnam rice since these varieties are well suited for their cuisines. Our rice is not well off with these cuisines. But we are entering now, with Basmati becoming a hit in markets like Hongkong. So in future, we can see an increase in Basmati markets. But for non Basmati, preferences will need to be adjusted.

In absence of outlier situations as the current one, India also faces competition from its Asian peers such as Thailand and Pakistan in terms of price and quality. Along with these, other hurdles such as less liquidity have also discouraged Indian exporters to supply in the Asian markets, which need to be addressed for gaining market share in the long term in these markets. Furthermore, currently growth in exports is also directly linked with the number of COVID-19 cases, progress in vaccination and growth of economies worldwide.

Thanks for sharing the beautiful blog with us. We are the Rice Exporters from India to International Market. And we are looking for Rice Manufacturer in India. If you are interested. You can Call/what’s app me on: +91 8523831222

thank you for sharing this informative blog with us. This is really good to read it. this is really helpful. keep posting these kinds of blog about Rice