Zero tariffs on electronic transmissions = Next wave of economic imperialism?

• Moratorium on customs duties for electronic transmissions was first initiated at the WTO in 1998, and has been receiving successive 2-year extensions since then.
• Developed countries want a permanent extension of this moratorium, while developing countries are against its continuation, due to the significant loss in tax revenue.
• The term ‘electronic transmission’ itself is vague right now, making it unviable for developing nations to agree to a permanent moratorium, especially since trade in these products is dominated by a few developed countries.
• Furthermore, the rise of technologies like 3D printing, AI and robotics is expected to give an unprecedented surge to electronic trade; and increasingly at the expense of physical cross-border trade. A more serious discussion is due on the topic at the WTO. 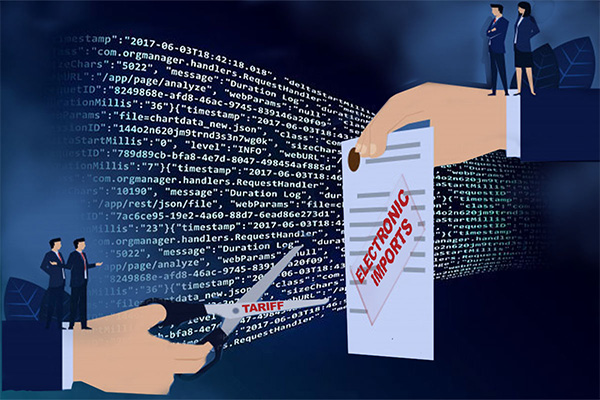 During its second Ministerial in May 1998, the WTO had adopted the Declaration on Global E-commerce, which recognised the growing potential of the sector to create new opportunities. It imposed a moratorium on customs duties for electronic transmissions with exactly this goal in mind.

It’s been over two decades since that declaration, and the moratorium on electronic transmissions continues to be extended at WTO, two years at a time (the last extension was in December 2019). But over the years, it has become an increasingly contentious issue at the forum. Developing countries like India, South Africa and Indonesia protest the continued extension of the moratorium, while developed members including US, South Korea and Singapore are in favour of it being made permanent.

The basic premise of the argument by developed countries is that the moratorium has enabled unencumbered growth of digital trade. Discontinuing it will have distortive affects on the digital economy. Supporters of the moratorium also conjecture that unilateral imposition of tariffs will lead to counter measures by affected nations thereby hampering developing countries in their endeavours to penetrate international markets.

There are varying estimates from available research literature on the actual impact of continuing the moratorium (or ending it) on developing countries. European Centre for International Political Economy (ECIPE) has done a comprehensive scenario modelling study. According to this study, potential tariff losses are far outweighed by potential GDP losses to developing countries from unilaterally imposing tariffs. The GDP loss for India according to these estimates would be US$ 716 million vs tariff revenue of US$ 39 million in scenario 1 of unilateral tariff imposition. Under scenario 2 of reciprocal tariff imposition, GDP losses for India are estimated at US$ 1.9 billion as opposed to tariff revenue of US$ 31 million.

An UNCTAD report has estimated that the potential loss to WTO developing member countries from the moratorium on electronic transmissions at US$ 10 billion using average bound duties and US$ 5.1 billion using average MFN applied rate. The paper concludes that with the growing digitalisation of trade and rise of technologies like 3D printing and Big Data Analytics, “any decision at the multilateral level with respect to moratorium on custom duties on electronic transmissions can have far reaching implications on developing countries’ share in global trade and their industrialization efforts”.

A WTO study in 2016 estimates the global tariff revenue loss of digitizable products at US$ 756 million annually, out of which 92% is lost by developing countries. 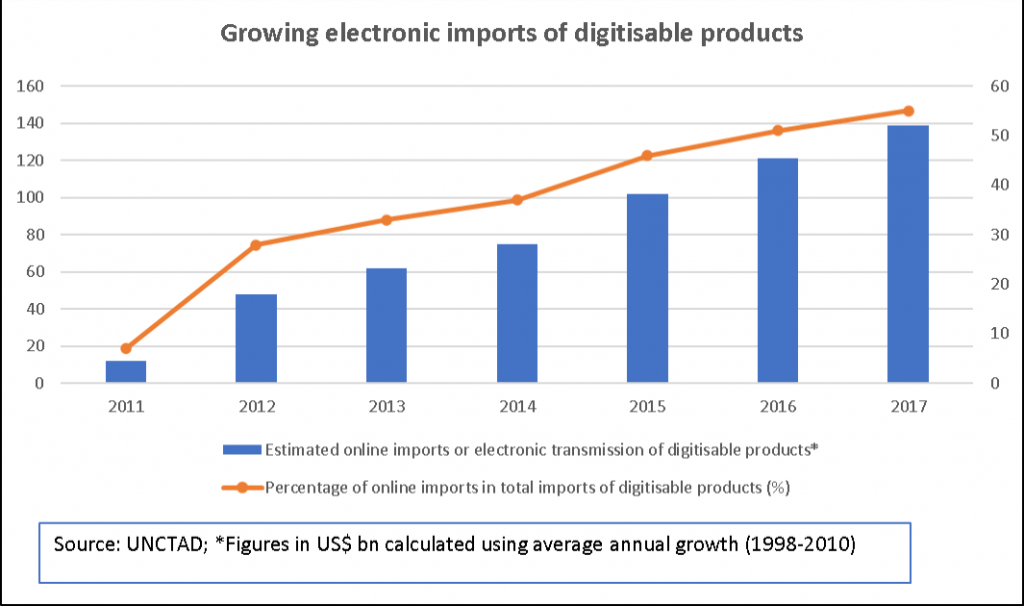 ON THE ALTAR OF LOGIC

Year 1998 was a time when the world had not yet seen the dotcom bubble burst, and e-commerce was considered the future of business by wide consensus. The optimism was so high that it led to overzealous expectations on valuations of dotcom firms, well before their time had come. In retrospect, that in itself was the major reason for the bubble to crash. Slowly but surely, the sector recovered. Newer players as well as incumbents learnt to game the new ecosystem, and customers also progressively gained faith in transacting online.

Today the story is of course starkly dissimilar, to put it mildly. From a ‘pie in the sky’ in 1998, e-commerce has established firm foundations across the world. From a time when Indians only consumed the net as a medium for information, the medium has witnessed a steady rise in adoption and made a disruptive impact across industries. An estimate anticipated that B2C e-commerce in India would rise at a CAGR of 25% (2017 as base year) to cross US$ 100 billion in 2022.

The crux is that today, e-commerce is not the fledgling industry it was in 1998. It has both growth potential and tailwinds in its favour. But at the same time, the digital business and the digital market is also hugely lopsided in favour of developed countries. Out of total US$ 29.4 trillion of e-commerce business in 2017 (including B2C and B2B), the US led the market with sales of US$ 8.9 trillion, followed by Japan (US$ 2.9 trillion) and China (US$ 1.9 trillion). India, meanwhile, was ranked 9th with sales of US$ 400 billion.

According to the UNCTAD report, world imports of digitizable products (physical imports and electronic transmissions) stood at US$ 255 billion in 2017. Out of this, estimated electronic transmissions were valued at US$ 139 billion.  Furthermore online imports are growing at a much faster rate. In 2011, they accounted for 7% of total imports. By 2017, their share had reached 55%.

Consider the case of movie streaming itself, which has particularly witnessed a surge post-COVID-19. The market was estimated at US$ 42.6 billion in 2019, with a CAGR of 20.4% from 2020 to 2027. A report by Motion Pictures Association of America (MPAA) in 2019 further confirms that video streaming services now have more subscribers worldwide (613.3 million users) than those with a cable connection (some 556 million users).

Another key trend to note for this industry is the huge monopoly of a few players. Netflix had over 139 million subscribers in 190 nations and territories, followed by Amazon Prime at over 100 million. HBO has around 5 million subscribers. Youtube itself is the most used video streaming app across markets.

The argument of ‘nascent industry’, in fact applies to developing markets. India’s own OTT industry is dominated by the big four – Youtube, Amazon Prime Video, Disney Hotstar and Netflix. Content has no nationality today, but these players have the leeway to unfairly continue to dominate. So developing countries like India are right in being circumspect of the impact of a continued duty moratorium.

Developing countries equally view the moratorium as a lost revenue opportunity, whereas tariffs would not make much of a difference to the large incumbents in this sector. A counter argument proposed by supporters of the moratorium is that it can be replaced by internal taxes.

Contrary reports argue that it is not possible to replace lost tariff revenues through internal taxation. This has been validated through an empirical estimation by Boston University, which concludes that a 1% loss in effective tariff revenue would imply the same loss in your effective tax revenue forever. Reciprocal tariff action will not impact developing economies either, as developed markets anyways charge tariffs upto their bound rates. For these products, bound duties are at 0.2%.

Moreover, internal taxation is not necessarily the answer for India, where the market is not yet developed for these services to the extent it has for developed nations. In fact, since they are not captured at customs, imported digital goods haven’t been factored into internal taxation schemes effectively either, putting domestic firms at a further disadvantage.

This relentless push by developed countries for a permanent moratorium actually has far greater ramifications. It is one of the key agenda points, that led them to launch negotiations for trade-related aspects of e-commerce. Firstly, the definition of electronic transmission is not only vague, but continuously evolving. Net exporters have treated electronic transmissions as applicable to content, net importers consider its application to just electronic carriers (CDs, bits, etc). Interestingly, the US itself uses the term to imply “transfer of data or information through an authorized electronic data interchange system consisting of, but not limited to, computer modems and computer networks”. But it conveniently chooses a different position at the WTO for obvious reasons.

In their PTAs as well, US, Japan and EU do not use the term electronic transmission due to the ambiguity involved. The conditions are worded thus – “parties shall not impose customs duties on “digital products” or the “delivery” of content that is “digitally coded and electronically transmitted” or “transmitted by electronic means”.

“Initially there was a note by WTO in 2015, which said that electronic transmissions are digital transmissions of those products that have digitalised. So now they are downloadable instead of being imported physically. That included movies, music, video games, print media and software.

Then there was a study last year by ECIPE, which also included some of the business services, which are electronically transmitted. This widened the scope of the moratorium. And then around December 2019, there was a study by OECD that included all services.”

A report by the German Development Institute aptly advises that the WTO should first target a clear definition of the term ‘electronic transmissions’. Rather than painting the whole segment with a broad brush, a comprehensive set of rules should be negotiated to cover which digital products and services can be brought under zero tariffs, customs procedures, dispute settlement, etc.

This has to also be periodically reviewed in light of the extremely dynamic nature of the segment and the new digital technologies emerging. All products that can be 3D printed, for instance, can easily bypass customs, and the same can be said for services that can be provided via the digital medium. For instance, ING estimated in 2017 that 3D printing will account for around 50% of manufactured products in 2060, thereby wiping out around 40% of cross border trade. On the whole, the growing use of robotics, AI, 3D printing, data, etc. imply a huge ramp up in digital transmissions in the coming years.

Continuing ambiguity of the term, therefore, threatens further losses for developing countries, leading to a lopsided, counterproductive and unsustainable growth in trade for these products. While this is not the time for a permanent moratorium, it is certainly the time for a rational debate. Developed countries in particular need to scale back on their aggressive posturing in favour of more balanced commitments that keep everyone’s interests in mind for the new digital world order.

Enquiry for Zero tariffs on electronic transmissions = Next wave of economic imperialism?