WTO Ministerial, New Delhi: Vanishing North-South divide? Not quite there yet

• India is hosting a WTO Ministerial meeting in New Delhi today to discuss and build consensus on key issues facing the multilateral forum.
• One of the core discussion points will be the issue of Special & Differential Treatment (SDT) to developing countries, which the US has opposed at the WTO.
• The US highlights how emerging markets have ramped up their share of global exports to over 50% over the past two decades.
• However, considering parameters like per capita income, human development index, etc. countries like India have a strong ground to demand continuation of SDT status.

Representatives of 22 developing and least developing countries including China, Brazil, South Africa, Bangladesh and the Caribbean are converging in New Delhi on May 13, 2019 for a 2-day WTO Ministerial Meeting to discuss and build consensus on a number of issues. The conference comes in the wake of a series of game-changing developments in global trade and growing differences at the WTO. It appears that the weakening multilateral consensus on trade is on the brink of a tipping point.

US-China negotiations are on the brink of breaking down, with the Trump administration going ahead with its threat to raise tariffs on US$ 200 billion worth of Chinese imports from 10% to 25% last week. During the same week, US Secretary of Commerce Wilbur Ross visited India with a clear signal that the US was expecting greater market access. There are myriad challenges at the WTO, like plurilateral discussions on e-commerce rules, deadlock in the dispute settlement process and fisheries subsidies.

Moreover, the ‘developing’ status of a few is under threat! The US has moved a proposal to end the Special and Differentiated Treatment (SDT) for India, China, South Africa and Indonesia, arguing that they have crossed that threshold.

Axis of global trade is shifting

Sure enough, emerging markets have garnered an increasing share of global trade in the past few years. A study by Bloomberg analyses the extent of this shift over the past two decades. Twenty years ago, around 62% of bilateral trade was between the rich countries – US, Europe and Canada. 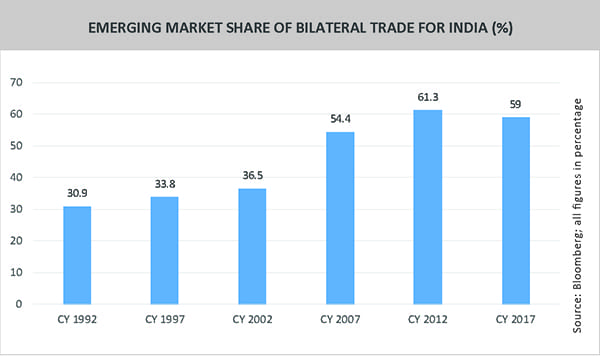 On the economic front, the next decade clearly belongs to Asia, if you consider the economies projected to exhibit growth rates of over 7%. A slowing China won’t be part of that club, but India, Bangladesh, Vietnam, Myanmar and Philippines will meet that benchmark, according to a report by Standard Chartered Bank. These countries will be joined by the African nations of Ethiopia and Côte d’Ivoire on this list, which implies a doubling of GDP every decade. 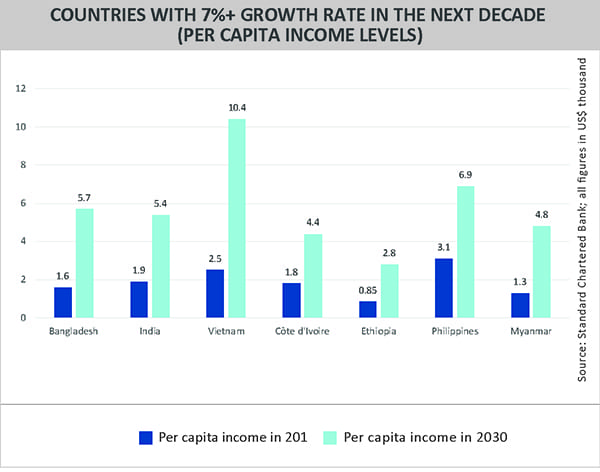 But divide goes beyond trade

So the question arises whether the US is right in its argument that SDT status to developing countries like India should be discontinued. The special and differential treatment clause provides developing countries with certain provisions, which include longer time-period for implementation of Agreements and commitments, measures to improve trade opportunities and support to carry out WTO-related work like dispute handling, implementation of technical standards, etc.

For instance, India was allowed manufacturing subsidies, which developed countries were not. But if the developing country reaches a certain share of global exports in a particular product, it is not permitted to give a subsidy on that product.

Currently, WTO member nations who have proclaimed the status of a developing country can avail of these benefits. US believes that this self-declaration is mischievous and misleading, with exports of developing countries now reaching over half of world exports. It seeks a review of the status, while developing countries like India feel it should continue as they are in different stages of economic, financial and technological development. Moreover, they opine that per capita income indicators should hold precedence over share in global trade when it comes to developing country status.

India’s per capita income at around US$ 1,979 stands way below Singapore (US$ 57,714.3), South Korea (US$ 29,742.8), United States (US$ 59,927.9) and China (US$ 8,827.0) according to the World Bank. A country like India may have witnessed a rise in per capita incomes, but it still ranks 130 on the Human Development Index (UNDP). India only shed the ignominious tag of being home to the largest population of poor people in the world in 2018, to be replaced by Nigeria. Moreover, since SDT is part of WTO rules, changes need to be negotiated by members.

So it is critically important that developing countries defend their SDT status stiffly, both under the provisions of the WTO and their genuine concerns with respect to their economic status. It is also important to note that with bilateral trade between emerging markets on a rise, they are no longer as dependent on trade with First World nations as they were two decades ago. By taking a united stand on SDT, they can assert their bargaining power at the WTO even more strongly.

Enquiry for WTO Ministerial, New Delhi: Vanishing North-South divide? Not quite there yet