IBT takes a closer look at the possible repercussions of the deal in the case of China, which happens to be India’s largest chemical exports market.

India’s decision to withdraw from the RCEP agreement, which was signed by ASEAN countries and their FTA partners – Japan, South Korea, China, Australia and New Zealand – can be viewed from several angles. While India is logically correct to be concerned about a potential surge in imports and the presence of China, it is also true that staying away from the world’s largest Free Trade Area carries disadvantages.

Countries within the RCEP are looking forward to tap the potential of reduced trade barriers to a huge economic zone with a total GDP of US$ 26.2 trillion (30% of world GDP) and market size of 2.2 billion people. A World Trade Centre report estimated that India stands to gain market share in 24 identified product categories if it improves its competitiveness, with potential export gains amounting to US$ 125 billion.

Naturally, while there are quite a few industries that have opposed RCEP on the grounds of enhanced competition, there are a few globally competitive sectors that would actually rue India’s withdrawal as a missed opportunity.

On an average, 23.6% of India’s chemical exports in the past five years have been destined for RCEP member countries. Furthermore, 16.2% of chemical imports in India have been sourced from this region. India has a negative balance with the RCEP members, recorded at US$ 18.4 billion in 2019. But one cannot ignore that between 2015 and 2019, India’s chemical exports to RCEP members have increased at a CAGR of 17.84%, while imports have grown at a CAGR of 9.79%. 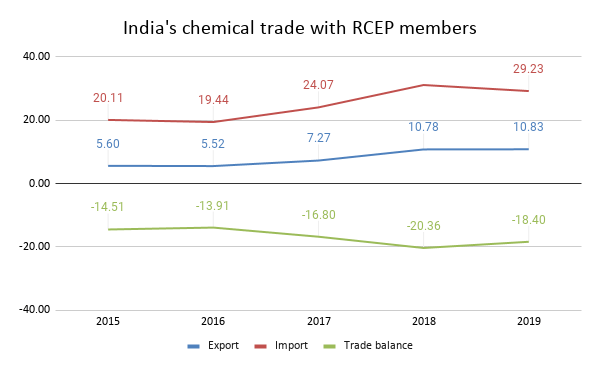 Under RCEP, a commitment has been made to liberalize the trade of goods among the signatory members by eliminating tariffs within 20 years from the time the agreement comes into effect.  This can impact India’s exports of chemical products; since member countries include the world’s top chemical players. India has a 2.26% share in global exports of chemicals, which is less than the share of China (13.09%), South Korea (4.73%), and Japan (4.59%), the non-ASEAN members of RCEP.

In order to understand the prospects of India’s exports of chemicals to RCEP members, we look at its largest chemicals market (not just in RCEP but also globally). Ironically, that market is China, one of the major drivers of India’s decision to opt out of the deal. During 2015-19, China accounted for 9.09% of India’s chemical exports. Figure 2 below shows China’s import of chemicals from India and RCEP member countries during 2015-2019. Imports from India have increased at a CAGR of 22.31%, while in the case of RCEP members, the CAGR is 4.34%, although the base effect is too significant here. 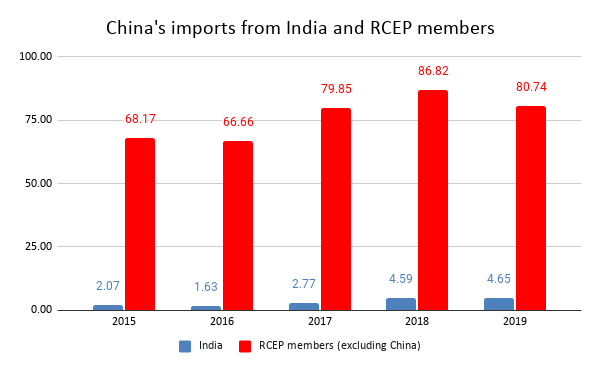 As a result of RCEP, the member countries that export to China would progressively be facing reduced tariff costs. However, China already has an FTA with the ASEAN, known as ASEAN-China Free Trade Area (ACFTA), which implies that these countries are already benefitting from reduced tariffs. Thus, we have limited our analysis to non-ASEAN members of RCEP. Table 3 below shows the top exported chemical products by India to China, where India has a share of at least 5% in China’s total imports of the product.

It is clear from the above table that among non-ASEAN members of the RCEP agreement, Japan and South Korea are the largest competitors for India, which have a significant share in China’s imports.  For instance, in the case of P-Xylene, South Korea has a share of 40.1% and Japan has a share of 13.9% in China’s total imports of the product while India’s share is 8.6%. In terms of global exports of this product also, South Korea and Japan have higher shares i.e., 31.6% and 15.9% respectively while India’s share is 13.2%.

Thus, it is evident that India would be facing higher custom tariffs than Japan and South Korea for some chemical products implying differential tariff costs to the countries. This can result in the loss of India’s share in the export of chemical products to China, ceteris paribus. To avoid the loss, it would be essential for the industry to preserve its exports by diversifying its export market or to look for ways to enhance their competitiveness in the RCEP market.