• India is overdependent on Middle East and OPEC countries for crude imports. Destinations like Saudi Arabia, UAE and Iraq are reasonably stable and less prone to geopolitical disturbances.
• With the end of sanction waivers by the US, Iranian crude of 22.5 million tonnes will vanish from the crude basket of Indian refiners.
• Increasing purchase from Iraq and Saudi Arabia to offset the loss of Iran crude could go against the fundamental of widening the crude sourcing basket.
• On the other hand, the loss of Iranian crude could open potential opportunities to import more from Nigeria, Kuwait, Angola, Venezuela, Russia, and the USA.

India’s vibrant democracy is currently deeply involved in the last leg of celebrating the biggest festival of exercising democratic rights through general election. During the election time, many important issues often take backstage, but not crude oil sourcing, pricing and its strategic implications. Especially, when the matter involves the United States, nothing can be passive for policy makers, investors, analysts, and readers. The Trump Administration is fully geared to reinforce the United States’ objective of blocking Iranian crude to the international market. By virtue of sanctions on Iran, flow of Iran crude to the international market is completely blocked; there is no extension of waiver to any of the countries including India, Japan, and China.

Indian economy is inching closer to three trillion dollar mark and the World Bank forecasts 7.5 per cent growth rate through 2021. Steady economic growth demands higher consumption of energy in agriculture, industries, manufacturing, construction, and other important sectors. As evident from the historical primary energy consumption statistics, India still heavily dependent on fossil fuel. Today, oil remains as the most preferred fuel for transport sector, which may not change in the immediate future.

Government’s intention to cut down oil import is plagued by domestic production slump. Indigenous crude production has fallen from 38.1 million metric tonnes (MMT) in 2010-11 to 35.7 MMT 2017-18, a shortfall of 2.4 MMT during the period. Consequent to rising oil demand and falling domestic production, India’s crude oil import has been steadily increasing. By the end of March 2019, India imported 226.6 MMT of crude oil compared to 163.5 MMT in 2010-11. 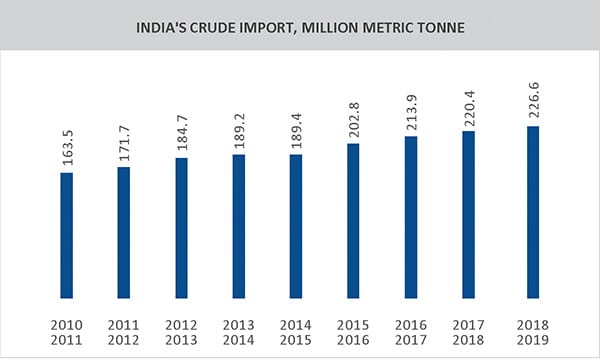 India’s overdependence on Middle-East and OPEC countries for crude import is a harsh reality. Crude sourcing destinations like Saudi Arabia, United Arab Emirates, and Iraq are reasonably stable and less prone to geopolitical disturbances. Whereas oil resource rich destinations like Venezuela and Iran are susceptible to local socio-economic disturbances as well as global or regional geopolitical disorders. The deteriorating relationship between the USA and Iran puts Asia in a challenging position.

Despite Asia being the emerging oil demand centre, large importers like China, India, and Japan failed to influence the Trump administration on extending the sanction waiver period of 180 days ending early May 2019 and there is no certainty about restoration of waivers.

Indian refiners anticipated the inevitable sanction on Iranian crude. In 2017-18, India imported 22.5 MMT of crude from Iran, which is 10.2 per cent of total crude import. Suddenly, Iranian crude of 22.5 million tonnes will vanish from the crude basket of Indian refiners. Presumably, they are better prepared to overcome Iranian crude supply constraints. There are multiple options, which include increasing purchase from Iraq and Saudi Arabia to offset the loss of Iran crude. However, such a choice could go against the fundamental of widening the crude sourcing basket.

Any additional purchase from Saudi Arabia means that India’s crude oil import dependence could exceed beyond 20 per cent of India’s total crude import. It certainly may not be the wiser decision in the long run, but in the short-run it looks viable. It seems some refineries have adopted increasing intake from Saudi Arabia. Further, in such circumstances, some refiners might increase purchase from the spot markets rather than entering into any long-term contract.

In terms of dollar value, since 2016-17 Iran has been the third largest source of crude supplier to India. Forced absence of Iranian crude could hurt Indian refiners. On the other hand, loss of Iranian crude could open potential opportunities to import more from Nigeria, Kuwait, Angola, Venezuela, Russia, and the USA. Diplomatic channels must be kept open to persuade Trump administration to revisit the decision in the interest of global economic prosperity.

India is an oil resource deficit nation, always over exposed to tight oil supply scenario; especially when any oil resource rich nation is placed under sanction. Stressed global oil supply conditions might escalate prices. It is understood that the US is on the job to influence Saudi Arabia to lift output. Hopefully, the Trump Administration tastes success to remove supply constraints.

Iran is seriously trying to entice India to purchase its crude. At the moment, Iran-India bilateral diplomatic engagement is on a tight rope. On the backdrop of India’s strategic interest in Chabahar port, Iran expects New Delhi’s support at this juncture.  Once the general election process is over, the new government will be in a position to take a considered call to deal with Iran issue.