US-India trade: Much more to review beyond GSP

• The US action of removal of GSP benefits to India is at loggerheads with its WTO obligations, as it violates the fundamental principle of non-discrimination.
• The action will have a marginal impact on the trade deficit with India, but it seems more of a signal from Trump that more could follow if India doesn’t give better terms to the US.
• India must bring out the inconsistencies in US trade policies as well, when it discusses the concessions demanded by the latter.
• The US-India trade relationship hasn’t been the one-way street that Trump alleges it to be, and a spirit of reciprocity is core to successful negotiations.

The Generalised System of Preferences (GSP) assures non-reciprocal, duty-free tariff treatment on certain products imported into the US from designated beneficiary developing countries (BDCs). The US, EU, and other developed countries have implemented similar programs since the 1970s to promote economic growth in developing nations, in consonance with WTO’s vision.

Now with Trump going ahead with ending GSP benefits to India, are we moving towards a new trade war with a series of actions and reactions like it happened with US-China last year? It is important to carefully consider the repercussions of every word and action. The US has clearly not done its homework well.

Firstly, the US action of removal of GSP benefits to India is at loggerheads with its WTO obligations. It violates the fundamental principle of non-discrimination because it discriminates between developing countries. The decision also enervates the objective recognized in the preamble to the World Trade Organization (WTO) agreement that it is a necessity for ‘positive efforts’ to ensure that developing countries secure a share of the growth in international trade commensurate with the requirements of their economic development.

The US has said that India is not giving market access to its companies and has raised serious concerns over capping of prices of certain medical devices and pharmaceuticals. It is also seeking market for its dairy products. Trump has cried hoarse over India’s ‘high tariffs’ on US exports like motorcycles and whiskeys.

Clearly, Trump wants to rebalance the bilateral trade equation, which is presently in favour of India. Total exports by India to USA in 2018 were at US$ 54 billion, while imports were just at US$ 33 billion. Moreover, India’s market has huge potential, especially for large American tech companies like Amazon, Flipkart (under Walmart), Netflix, Google, Uber and Facebook. However, the Indian government’s position on issues like data localization have made it hard for these companies to operate in the country. Trump is obviously wary of India’s attempts to build indigenous companies in e-commerce, search, fintech, cab hailing, foodtech, etc, in a manner similar to China.

India has rightly asserted that GSP benefits are “unilateral and non-reciprocal in nature extended to developing countries”, and that they couldn’t be used for advancing Washington DC’s trade interests and non-discriminatory benefits. US has a history of wielding tariff concessions in a ‘carrot & stick’ manner, as was the case with the regime change in Chile in the 1980s. Trump also threatened Mexico recently with 5% import tariffs if it did not crack down on migrants. Later, the threat was withdrawn when Mexico agreed to comply.

US remains a vital export market for India, with growth rate figures significantly higher than global exports to US for the past decade. India’s total exports and agri exports grew at 9.6% and 11.7% CAGR from 2009 to 2018 while corresponding exports from the rest of the world to US grew by 3.5% and 5.7% respectively. 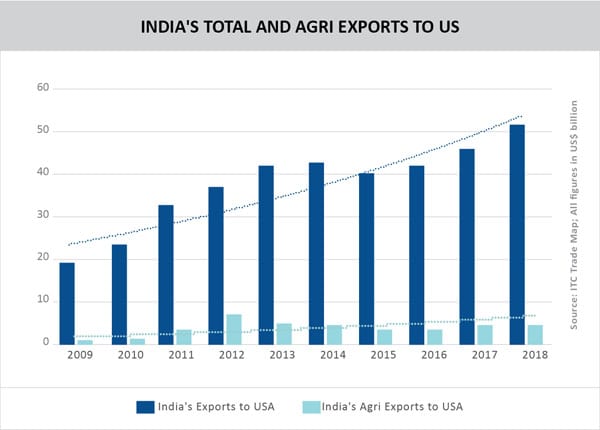 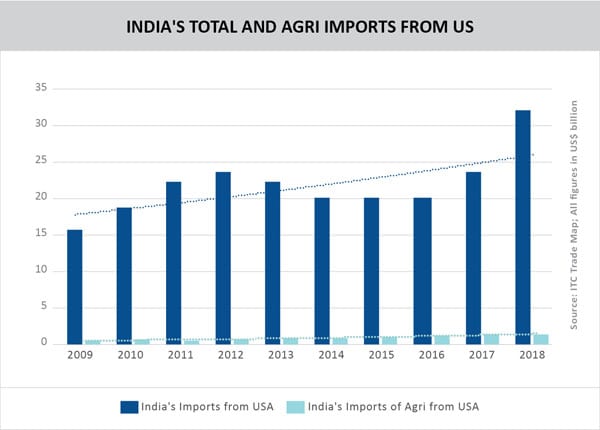 India was the largest beneficiary of the GSP program in 2018 with US$ 6.35 billion in imports to the US given duty-free status. India’s top GSP exports to the United States in 2018 included motor vehicle parts, ferro alloys, precious metal jewellery, building stone, insulated cables and wires. Out of US$ 51.6 billion of exports to US by India, US$ 6.35 billion worth of exports will be affected, which will hardly be impacted. Also, most of the exports are of intermediate goods not produced in the US. Since they are low in the manufacturing value chain, US would also stand to lose its competitiveness which will be reflected in coming six months.

Shoe on the other foot?

Besides India should also highlight inconsistencies and non-transparency in US trade policies; an issue much larger than GSP. As many as 11,012 ‘Made in India’ food products were rejected by the USFDA from 2014 till February 2019. According to information available on the USFDA website, the agency has refused entry to 13,334 Indian products, which includes bakery products, fried snacks, spices, basmati rice, fisheries and herbal products, over the last five years.

Going by USFDA rejections data – India tops the list of rejections followed by China. USFDA rejections are given as number of consignments rejected, and each rejected consignment may or may not be the shipment as a whole. There is no clarity on this issue. Also values are not assigned to rejected consignments, which leaves no scope for estimating the percentage of rejected food and pharma products out of total exports. India needs to get greater transparency on this issue to be able to calibrate its exports better in accordance with the demands of the US market.

Moreover, the USTR has published a damning report criticizing India as one of the toughest countries in the world for protection and enforcement of IP. The US has also sought to discredit the Indian pharma industry by alleging that India and China are the largest sources of counterfeit drugs to the US. India has strongly countered these charges.

The same goes for H-1B visa, where regulations are only becoming tighter, and affect Indian IT companies operating in the US. New regulations like providing evidence that the employee is required, has the requisite specialisation and will work on the same specialisation for the duration of the visa have made the requirements more complex. According to CARE Ratings,

Given these realities, India should be open to discuss the concessions that US seeks for its companies, it is important to clearly express that the US-India trade relationship hasn’t really been a one-way street in its favour, the way Trump has constantly tried to assert when he calls India a ‘tariff king’.

US imposed an extra levy of 25% on steel and 10% on aluminium products last year. India has already acted with significant restraint so far, by not slapping retaliatory tariffs on high value US products like apples, almonds and walnuts, that could bring in US$ 240 million of additional tax revenue. But this restraint needs to be re-assessed if US continues to pressurize India to accede to its demands. The trade partnership is important to both nations, and a spirit of reciprocity needs to be respected in trade talks. A hostile equation certainly doesn’t benefit either country.

Enquiry for US-India trade: Much more to review beyond GSP