US economy: Does COVID-19 signal the end of Pax Americana?

• Even as one in every 3.5 deaths due to COVID-19 is that of an American, the US has pressing problems of economy to counter in tandem with its pandemic response. Unemployment rate in the US for April 2020 increased by 10.3% points to 14.7%. This is the highest rate and the largest over-the-month increase over a period of seventy years. The number of unemployed persons rose by 15.9 million to 23.1 million in April.
• For the first time in five years, growth rate of labor productivity, which is output per hour has been negative. In the first quarter of financial year 2020, labour productivity dropped by 2.5%, which was 1.2% during the preceding quarter.
• From February 2020 to March 2020, USA’s exports of merchandise goods and services fell by US$ 20 billion, which is a 10% reduction. In fact, the more worrisome fact is its services exports had a larger fall of 15%.
• These data points, along with the continuing spectre of COVID-19, raise serious questions on US ability to retain its pole position as a global superpower. 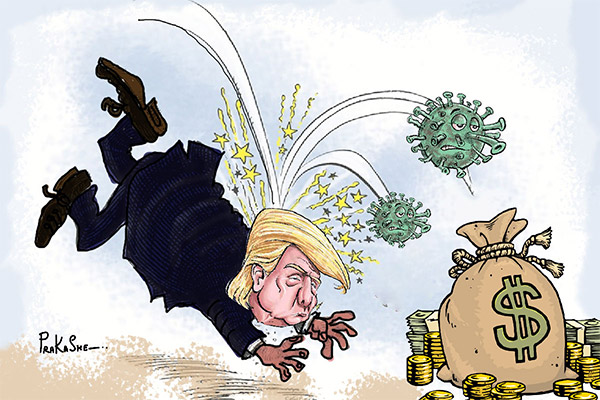 As per official figures, out of every 3.5 deaths happening globally due to the COVID-19 pandemic, one is an American; representing almost 29% of the world’s deaths. This is quite a sobering position for the US, which is the world’s largest economy and reigns supreme in terms of capital, military, geopolitics, currency, diplomacy and much more. America’s evident inability to control both the pandemic and its economic fallout give rise to speculation on whether the era of ‘Pax Americana’ (defined by its supporters as a period of Western and global stability under the US), which essentially began from the middle of the last century, is on its last legs. 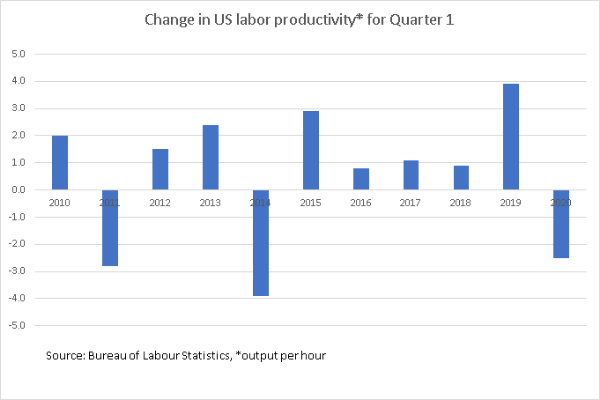 Data released by Berkeley’s Institute for Research on Labor and Employment underscored the extent of COVID-19’s impact which will have a perennial impact. Real unemployment may be at 25%, and millions are filing for unemployment relief every week. Just to give one example, California is expected to lose $20 billion to $50 billion in tax revenues, and this will come from its US$ 200 billion annual budget, thus escalating pressure on fiscal deficit of one state. Similarly, other states too are facing the heat of proliferated fiscal deficit. Let’s have a look at the unemployment scenario of USA.

The unemployment rate in April 2020 increased by 10.3% points to 14.7%. This is the highest rate and the largest month-on-month increase in the history of seventy years. The number of unemployed persons rose by 15.9 million to 23.1 million in April, which is a sharp rise of 7.2 million. The sharp reversals on economic parameters reflect the effects of the COVID-19 pandemic and efforts to contain it. 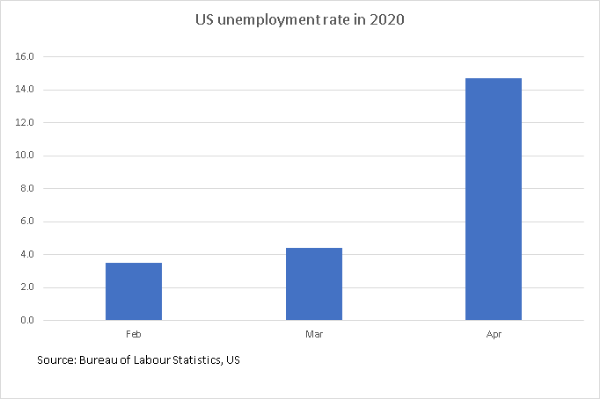 In February 2020, USA’s unemployment rate was 3.5% which burgeoned to 14.7% in April. Also, the individuals claiming unemployment benefits from government in USA escalated to 26.4 million since mid-March. That amounts to more than 15% of the US workforce.

For the first time in five years, growth rate of labor productivity, which is output per hour, has been negative. In the first quarter of financial year 2020, percentage change in labour productivity became -2.5%, which was 1.2% during the preceding quarter. This has been primarily due to the lockdown prevailing in USA, which has made people unemployed. Also, domestic demand within USA is continuously shrinking, which is making GDP look sullen.

President Donald Trump is eager to open the economy soon, and the White House has launched the Opening up America again plan.  Dr Anthony Fauci, an important member of the COVID-19 task force, and Director of the National Institute of Allergy and Infectious Diseases, has warned that opening the economy so soon would lead to more death and suffering.

He is particularly against Trump’s view that schools can be reopened this autumn. Trump has called Dr Fauci’s comments unacceptable, saying that he wants to play “on all sides of the equation”. But a Government whistleblower Rick Bright (fired as head of Health and Human Services biodefense agency) has cautioned that US still does not have a comprehensive battle plan to tackle the virus. With the death and destruction that the country already faces, the coming months are rife with uncertainty on both the trajectory of the virus and the economy. 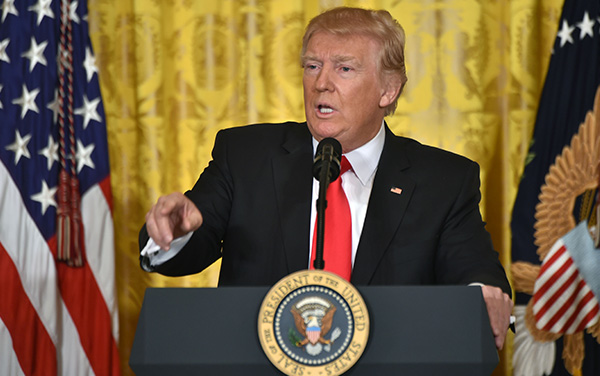 According to data provided by United States Census Bureau, USA’s exports of merchandise goods and services fell by US$ 20 billion from February-March 2020, which is a 10% reduction. The more worrisome fact is its services exports had a larger fall of 15%. When most economies are trying to eye services exports during pandemic, USA is experiencing a massive negative growth. Even for India, this figure remained at status quo.

Looking at its merchandise exports, all exports of goods by end-use category and commodity registered a negative growth compared with February figure, especially automobiles. Another point to observe is that exports of those categories have been impacted whose demand elasticity is more than one like technological products, capital products, industrial materials and supplies. This means other economies are competing strongly with US on these products. In April, this data is expected to be even worse as the degree of pandemic became more concentrated with scenario becoming worse. Imports too behaved in a similar manner. USA’s imports of services plummeted by 22% in March compared to February this year. For merchandise goods also the drop in imports were 2% w.r.t. February.

Critics and political experts say the Trump administration’s approach to the coronavirus hasn’t just hampered the fight against the pandemic, it has increased uncertainty, eroded respect for the US and deepened concern that the international system no longer functions effectively. Knowing the fact that USA is going to lose almost 6- 7% of its GDP in 2020, it is definitely going to proliferate its debt to GDP ratio and hamper credit ratings.

Another factor which aggravates the position of Uncle Sam is its consumerism. The US economy has long been consumer-driven, and over the past five years, consumers have powered economic growth even more than usual, expanding the economy faster than those of most other big, developed economies. Consumers’ share of GDP reached a towering 68% in last year’s fourth quarter. Now, consumers are suddenly under intense financial pressure. Of those who still have jobs, millions cannot work from home and must choose between risking their health (and potentially their lives) by working in grocery stores, warehouses, post offices, hospitals, and other high-contact settings, or not working.

On top of all is a crowning irony. Since the US is still fundamentally a consumer-driven economy and can’t transform overnight, consumers as a group will have to get themselves and the whole economy out of this. Morgan Stanley forecasts a 30% decline of real GDP in the second quarter of 2020 and the same forecast by Goldman Sachs is 34%. To further advocate the unfavourable economic scenario of USA, Fitch ratings considers the risks to US banks’ credit profiles to be skewed to the downside in light of expectations around the associated business disruption, anticipated rise in unemployment and contraction of GDP in the US.

Given these weakening economic indicators, certainly the apprehensions towards US remaing a global superpower become strengthened. For perhaps the first time in history, a country like US is forced to contemplate on how military might and economic dominance can be quite ineffective in the face of a health emergency like COVID-19. 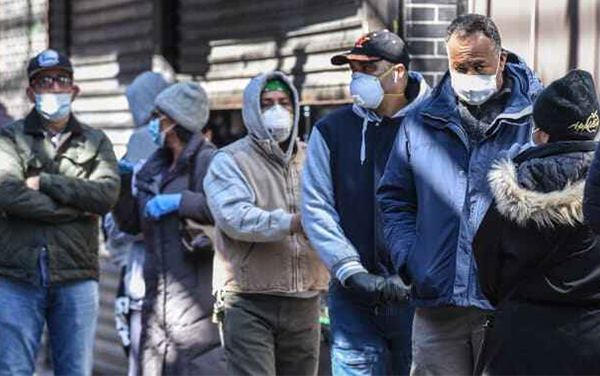 Supporters will argue that the US remains attractive to the world for many reasons – currency, investment, stable regulatory environment, educational institutions, technological leadership, startup ecosystem, etc. But this is a reset moment for the entire global economy, wherein the world is looking for global leadership. The US is certainly not available to take that mantle at the moment, and China is busy defending its ‘complicity’ in the spread of the virus. Other major economic powers, including India, Japan, Australia and EU are evolving their own strategies to combat the virus and also play a more enabling role on the global stage during the crisis.

So as far as Uncle Sam goes, the odds are definitelty stacked against it at the moment. Some degree of realignment of power equations is to be expected. From the US perspective, the first major step will be to take leadership in tackling the health and economic consequences of COVID-19. If it is unable to do that in time, a major shake up in global confidence in the United States of America is inevitable. Once that happens, the threat to its leadership will be quite pressing, and real.

Enquiry for US economy: Does COVID-19 signal the end of Pax Americana?