• Many products imported by India from China can be categorized as high value-added products, which are technologically oriented, labour intensive or inelastic products. Currently, around 40% of India’s imports are high-value added products like electronic items and medical instruments.
• Being a manufacturing hub, China is able to export these products as it has higher price competitiveness. India has to structurally transform its manufacturing base and achieve economies of scale, which requires time.
• Sectoral inputs provided by China into India’s sector in generating value added products are US$ 25.2 billion. Around 36.2% of total Chinese imports of US$ 68.2 billion are further utilized by domestic industry for value addition & the rest are intended for direct consumption.
• On calculating Leontief inverse multipliers for Chinese inputs in India, Centre for Advanced Trade Research (CATR) analysis concludes that India’s dependence on Chinese industry is low (less than 1% of Indian GDP). 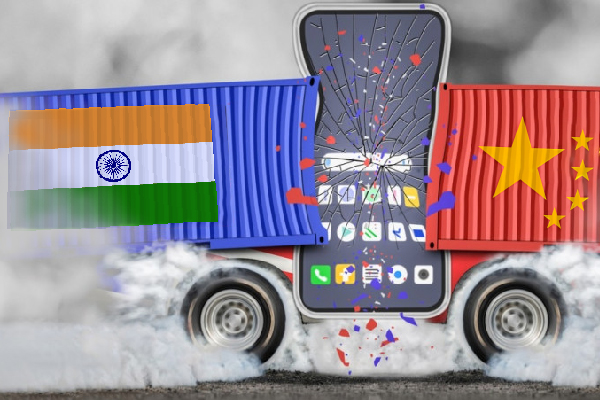 Given the recent border tensions with China, India’s economic and trade relations with its north-eastern neighbour are not expected to be assuaged any time soon. Ties may remain strained for some time, as Indians across the board are looking for some form of payback for Chinese aggression at Galwan Valley.

Already there is a campaign to boycott Chinese products and promote the domestic industry. The Prime Minister’s flagship “Aatma Nirbhar Bharat” or “vocal for local” programme, will promote Indian manufacturers. Although not country-specific by itself, the initiative can have repercussions for Indo-China economic relation. India’s trade deficit with China is continuously declining, which is partially because of reduction in its imports from China. One of the most significant product categories is mobile phones, wherein India’s imports declined by 33% YoY in 2019.

Indo-China trade has been in the headlines, since it has been revealed that trade balance of India with China is decreasing. Also, China, in 2018 offered zero import tariffs on some 8,000 tariff lines to eight south Asian and East Asian countries including India, which helped India in escalating exports to China, mainly of agri products.

But to answer the question of import substitutability from China, firstly we need to understand India’s import structure from China. Clearly there are many products imported from China that can be categorized as high value-added products, which are technologically oriented, labour intensive or inelastic products. Currently, around 40% of India’s imports pertain to high-value added products like electronic items and medical instruments. The rest are either low-technology labor oriented or inelastic products like APIs, fertilizers, chemicals or toys.

In the coming three to five years, India will be able to substitute at least one-third of current imports, mainly in electronics such as smart phones, television, auto components, solar PV cells and telecom equipment. It is not pragmatic to immediately block imports from China across categories, as domestic stakeholders will need time to build competitiveness. But yes, there will definitely be a reduction in imports of Chinese products in the coming years.

India’s imports from China are highly concentrated towards manufactured electrical & electronics products, accessories of electric & electronics, fertilizer and chemicals. Being a manufacturing hub, China is able to export these products due to its price competitiveness. India has to structurally transform its manufacturing base and achieve economies of scale, which is not a matter of a day.

Word Input Output Data (WIOD) provides data on inputs supplied by one country to another in their final demand and gross output generated. Calculations based on WIOD suggest that out of China’s total inputs supplied in India for value addition, more than 90% belongs to the manufacturing sector. Manufacturing of chemicals and chemical products has the maximum share among Chinese inputs provided in India’s value addition for domestic consumption. This means that India is dependent on Chinese chemicals for internal value addition activities, which is not that easy to replicate. But those imports, which are directly used by end consumers and do not flow though the value chains, are relatively easy to replicate or substitute.

First, let’s see what inputs are provided by China which flow though the value chain in India, instead of a direct consumption. Sectoral inputs provided by China into Indian industry in generating value added products are US$ 25.2 billion. So out of total Chinese imports (US$ 68.2 billion), 36.2% is further utilized by domestic sectors for adding value & rest goes for direct consumption.

As the manufacturing sector in India experiences a structural transformation, we expect to substitute those imported products first, which are intended for end use. According to the graph below, chemicals, metals, electronics, electrical and machinery are the top five sectors which received maximum inputs from China, which are further processed by our domestic sectors.

Note: Figures based on World Input Output Database are of latest release i.e. 2016. Values are converted into current prices.

On calculating Leontief inverse multipliers for Chinese inputs in India, it was found that sectoral dependence of Indian industry is minimal. Majority of multipliers value are zero indicating lower dependence on Chinese sectors (less than 1% of Indian GDP). Thus, import substitution should not be daunting for India for both these reasons – low dependence of economy and the high share of end consumer goods.

The analysis indicates that reducing our import dependence on China is certainly an achievable target, but cannot be done immediately. As discussed above, 63.8% of Chinese imports are directly used for consumption, which can be first targeted as India starts transforming its manufacturing sectors towards greater self reliance. This is surely a time-oriented outcome. India has an additional plus point – it is looked upon as a new and upcoming destination for setting up conglomerates, in a manner similar to where China was three decades back.

Enquiry for ‘Un’made in China: Achievable in good time?