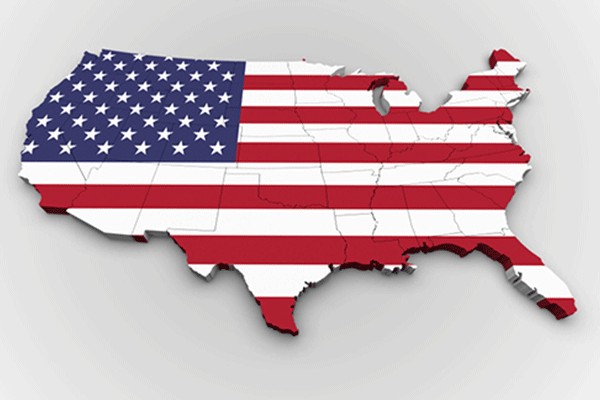 Most of the US’s recent tariffs on Chinese goods are imposed on Industrial Products and Technology, providing India an opportunity to further increase its existing trade with the US.

The United States of America is the world’s foremost economic power, with global interests and an unmatched global reach. Its GDP was over $19.39 trillion in 2017 and accounted for close to a quarter of the world total.

The United States’ economic freedom score is 75.7, making the economy the 18th freest in the 2018 index. The USA also boasts an ‘Ease of Doing Business Rank’ of 6 with a Distance to Frontier (DTF) of 82.54 according to The World Bank 2018.

Although services account for about 80% of the GDP, the US remains the world’s second-largest producer of manufactured goods and the leader in research and development.

USA shipped US$1.5 trillion worth of products around the world in 2017, making it the second largest exporter globally after China. This figure represents roughly 8.8% of the overall global exports, estimated at US $17.5 trillion last year.

The country was also the largest importer in 2017, importing a total of US $2.4 trillion worth of products. This accounted for 13.5% of the total imports last year.

The top trading partner of USA was China, followed by Canada and Mexico- fellow co-signers of the North American Free Trade Agreement (NAFTA). India was the 9th largest trading partner in 2017, with a fair trade surplus with USA primarily due to its export of jewellery articles, medicaments and marine products. 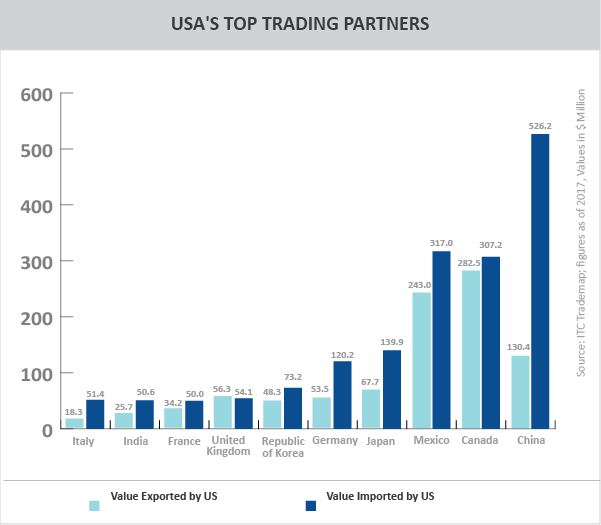 US merchandise trade with world

USA’s imports from the world have exceeded its exports throughout.  In 2017, USA had a trade deficit of US $862.7 billion. The overall trade of USA has followed an upward trend throughout, with slight downward trade movement experienced in 2015-2016. There was a sharp drop in the country’s trade vis-à-vis the world in 2008 due to the global financial crisis. Its largest bilateral trade imbalance is with China. The United States ran a US $395.8 billion deficit with China in 2017. The next largest contributor to the deficit, at $74 billion, was Mexico. 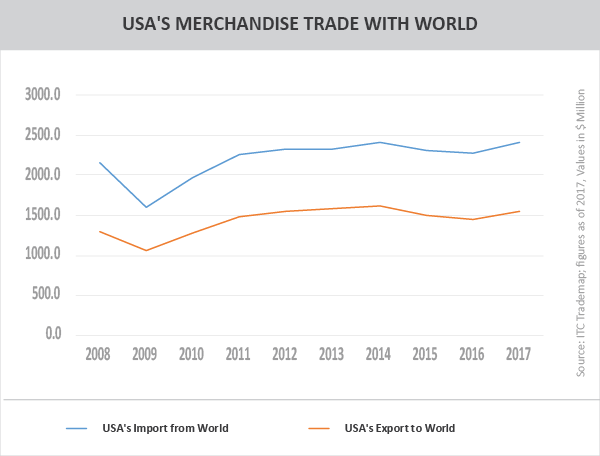 India’s export to USA has exceeded its import from the country throughout the last 10 years. India had a trade surplus of US $22.0 billion last year, and recorded the highest surplus in 2014. 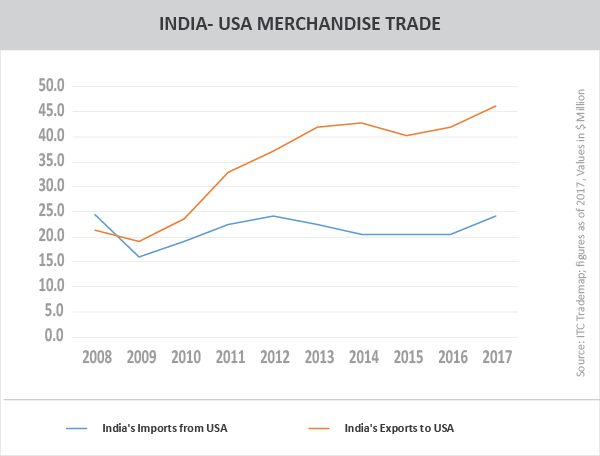 US exports to world

USA’s total export in 2017 amounted to US $1.5 trillion. Its top export product at HS-6 digit level last year was Oils and Preparations of Petroleum or Bituminous Minerals, with a share of 5% in its export basket. This was followed by Motor Vehicles, Petroleum Oils, Soya Beans, Gold, Electronic Integrated Circuits as Processors & Controllers and Diamonds. 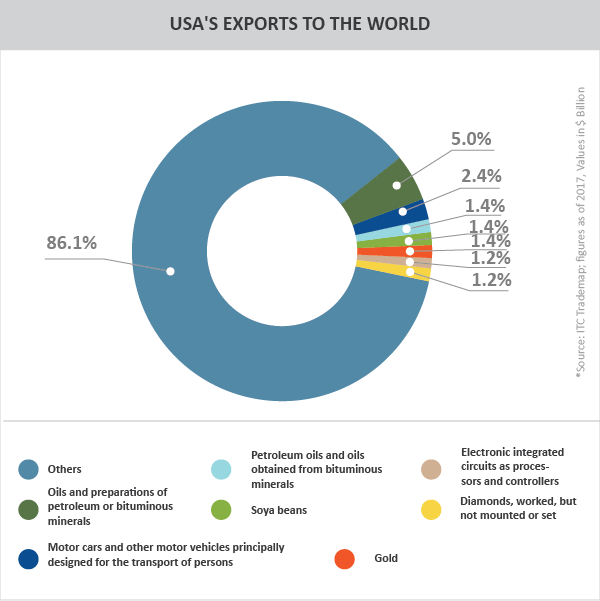 USA’S IMPORTS FROM THE WORLD

USA’s import basket continued to be dominated by Motor Vehicles (US $150.8 Billion) and Petroleum Oils (US $139 Billion), which together accounted for 12.1% of its total imports (US $ 2.4 trillion) at HS-6 digit level. For most of the products that USA imported in 2017, there was a rising trade deficit on yearly basis, which shows USA’s increasing quantum of imports. 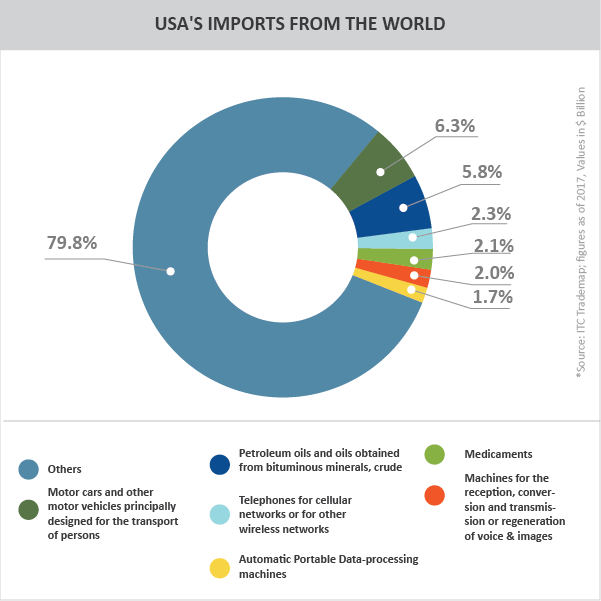 India’s trade with US

India’s total exports to the USA were US $46 Billion in 2017. Its top three exports at HS-6 digit level were Worked Diamonds (US $ 7 Billion), Medicaments (US $3.8 Billion) and Stranded Wires & Cables of Aluminium (US $1.9 Billion). The export of Articles of Jewellery from India witnessed the maximum annual growth rate in the last 5 years of around 27%. Most of the products exported by India to the USA had a positive growth on a yearly basis. 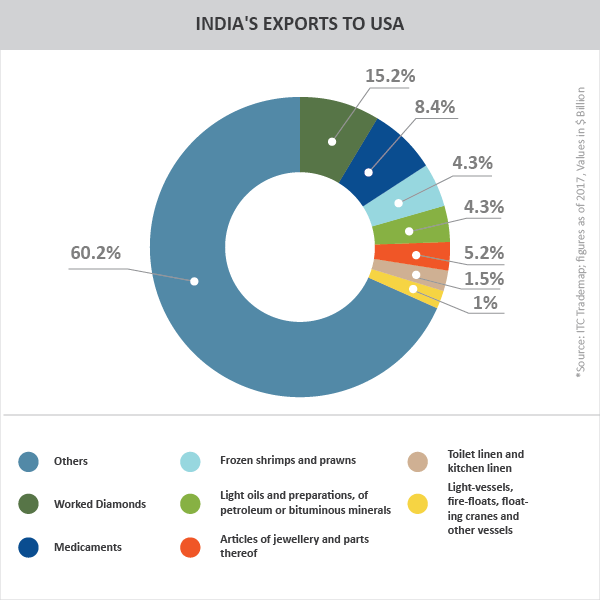 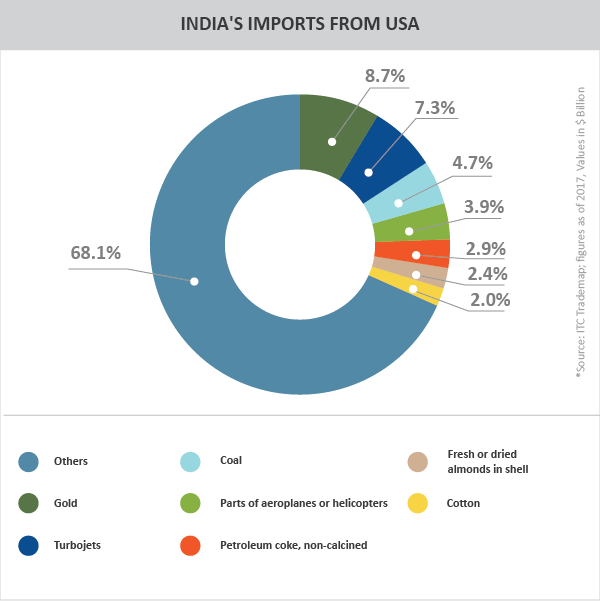 To conclude, it can be said that the US is the world’s biggest nation when it comes to trade. It is the biggest importing nation and one of the biggest exporting nations. However, the looming US-China Trade War could pose a problem for the global superpowers as both are involved in a lot of bilateral trade. According to ITC Trade Map, 21.8% of US’s imports came from China and 8.4% of exports went to China in 2017. This made China their biggest partner outside of NAFTA. The Trade War could open up opportunities for India and other countries to take China’s place. It must also be noted that most of the US’s recent tariffs on Chinese goods are imposed on Industrial Products and Technology, providing India an opportunity to further increase its existing trade with the US.