Union Budget 2021-22: Economic revival on the bedrock of infrastructure

As India endeavours to revive its economy post-COVID, a strong impetus to the infrastructure sector under Union Budget 2021-22 is expected to create strong externalities that will help propel the key growth engines of the economy and also help Indian businesses seamlessly integrate with their counterparts across the globe. 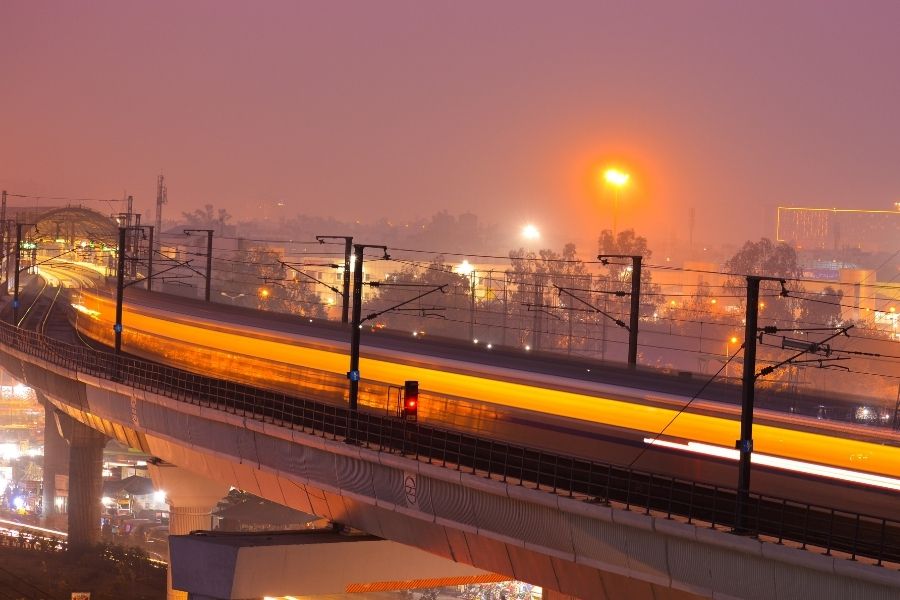 Photo by Rohit Gangwar from Pexels

Quality of infrastructure is well recognised as a major barrier to India’s economic growth. As of 2018, India’s cumulative length of road amounted to 5.5 million km, equipping the country with the second largest road network in the world. India ranks above the US (6.7 million km) and China (4.6 million km). Furthermore, the country has the 4th largest rail network in the world, with a route length of 67,415 km as of 2018-19. However, 40% of the roads are unpaved. Highways consist of not more than 3% share in total road length, as compared to 40% for China. Furthermore, 75% of the highways are upto two-lanes wide. Thus, the lack of quality affects the logistic costs of the country. Dr Huw Mckay, Vice President, Market Analysis & Economics, BHP Billiton, comments:

The average speed of passenger and goods trains is constrained to 60 kmph and 25 kmph respectively. With the interaction between quality gaps in the road network, and quantity and quality gaps at sea ports, you have a logistics system that is not internationally competitive in terms of domestic commerce, imports or exports.

With a focus to improve infrastructure, the Indian government has brought various provisions in the Budget 2021-22. One major focus of the government under the budget is its initiative of National Infrastructure Pipeline (NIP) which is jointly funded by the private sector (21%), central government (39%) and state governments (40%). The plan was launched with 6,835 projects and Rs. 44 lakh crore worth of projects are currently under implementation. Some of the sectors in which investment has been planned under NIP are irrigation, rural agriculture & food processing and highways. Under Budget 2021-22, the government has further expanded NIP to cover a total of 7,400 projects, with enhanced funding.

The allocation of Rs 1.18 trillion in Budget 2021-22 and the announcement of over Rs. 2 trillion worth of highways in 4 states is a welcome move for smoother logistics and transport. Benefits of these will be reaped by Tier-II and smaller cities and will allow better connectivity to every nook and corner of the country. We are very happy to see such steps and hoping for an even better implementation.

One major step towards improving infrastructure funding is establishing a Development Financial Institution (DFI). DFI provides funding to economic development projects, which otherwise struggle to attract funding from commercial banks due to high risk. India had DFIs in the past include ICICI and IDBI. Emphasising the importance of DFIs for infrastructure funding, Vinayak Chatterjee, Chairman of Feedback infrastructure said, “A 100% sovereign-owned DFI, under an act of Parliament, will have no limits [on leverage]. In China, the China Development Bank had, once in its history, leveraged 75 times. Therefore, the new DFI has the power to make up the gap, which is emanating because of the inability of states and the private sector to fund infrastructure.” Further explaining, he says a 100% sovereign owned DFI imply that it would experience significantly lower capital cost than the existing financial institutions. In the budget, Rs. 20,000 crore has been allotted to fund these institutions.

Another step is to monetise the currently operating public infrastructure. A “National Monetization Pipeline” has been planned for this purpose. Some of the infrastructure assets that are planned to be monetised include Dedicated Freight Corridor assets, AAI Airports in Tier II and III cities, sports stadiums and transmission assets of PGCIL. Steps to increase capital expenditure have also been taken to finance the projects under NIP. For BE of 2021-22, Rs. 5.54 lakh crore has been granted under capital expenditure, an increase of 34.5% in comparison to BE 2020-21. This significant increase is expected to improve the power transmission and distribution sector.

Commenting on the government’s initiative for ports, shipping and waterways, Ankit Patel, Vice President and Co-head of ICRA opines:

The government’s plan to award 7 projects via Public-Private Partnership (PPP) route at Major Ports worth Rs 2000 crore in FY 2021-22 is likely to increase the involvement of private players in O&M services at the major ports. Further, a new scheme will be rolled out to promote flagging of merchant ships in India by providing subsidy support to Indian shipping companies in global tenders floated by Ministries and CPSEs. For this Rs. 1,624 crore will be provided over 5 years and should enable companies to enhance their global share.

In the highway and roads sector, the government introduced the Bharatmala Pariyojana programme to make the movement of the freight and passengers more efficient. Until now, under this programme, 13,000 km of road has been awarded, out of which 3,800 km has been constructed so far. The budget has allotted another 8,500 km under the programme. The government has planned more economic corridors to boost the infrastructure, as presented in the table below:

In railways, the National Rail Plan has been developed to increase the capacity of the railway system by 2030, which will be capable of accommodating the increased demand up to 2050. For the railways, Rs. 1.10 thousand crores have been allotted out of which Rs. 1.07 thousand crores has been allotted for capital expenditure. For the urban sector, focus has been on increasing the presence of public infrastructure through investing in expanding bus services and metro services. Provisions for this purpose include expanding the bus service with an investment of Rs. 18,000 crores. In addition, the government plans further expansion of metro tracks in many cities such as Kochi, Chennai, and Nagpur.

In the power sector, to uplift the Distribution Companies (DISCOMs), an outlay of Rs. 3,000 crores has been committed over the next 5 years. This assistance is being given to help them in creation of infrastructure such as pre-paid smart metering. As is well known, DISCOMs have been the weakest link in the power sector, while suffering huge losses. the government is also planning a framework for introduction of competition in the segment. KPMG India explains in its note, “Competition is expected to bring in operational efficiencies and investments from private sector players. This will provide consumers choice of supplier (as in the case of telecom or internet services), help Discoms become more disciplined and consumer-centric and improve reliability of supply. A strong framework for retail competition, rolled out across states, could help in gradual revival of the power sector.”

The government’s strong push to infrastructure in the Union Budget 2021-22 provides a positive impetus for economic growth, since the sector affects India’s competitiveness. As per the World Bank’s Logistic Performance Index 2018, India ranks 44th among 160 countries. Infrastructure is one of the factors that affect India’s ranking as the logistic performance of the economy highly depends on this sector. In comparison to 2016, India’s rank in the LPI index has fallen by 9 places, albeit an improvement over 54 and 46 in 2014 and 2012 respectively. As India endeavors to revive its economy post-COVID, a strong impetus to the infrastructure sector is expected to create strong externalities that will help propel the key growth engines of the economy and also help Indian businesses seamlessly integrate with their counterparts across the globe.

Enquiry for Union Budget 2021-22: Economic revival on the bedrock of infrastructure