With Government’s resolve to double the income of farmers in the country by 2022, the role of agri-exports industry assumes significance to uplift financial conditions of the farmers and ensure renumerative return for farm produce. The Trade Promotion Council of India (TPCI) caught up with Dr. Davish Jain, Chairman of the Soybean Processors Association of India (SOPA) to know his point of views as what he thinks, needs to be done to raise the farmer’s income, the challenges the farmers are facing today and ways to overcome those challenges. Dr. Jain shared some essential and valuable insights on the industry trends and challenges.

Q1. How do you see Soybean as an Indian export product? Has India been able to leverage the advantages?

Davish Jain: Soybean has a huge market across the globe. However, as far as India is concerned, we lag behind in soybean production compared to countries like Brazil, Argentina and the USA. However, we have got an edge over other countries in non-genetically modified products which are in demand in developed countries. There is a huge potential to export soybean meal and other soybean processors to these countries which can earn substantial amount of foreign exchange for the country. Presently, low productivity level of Soybean is our biggest concern. As compared to major Soybean producing countries like  Brazil, Argentina and the US, which contribute to around 80% of the total world Soybean production,  per hectare yield of soybean in India is almost one-third of these countries.

Q2. What have been the major challenges of the industry?

DJ: Low productivity of Soybean in India with high production cost is our biggest concern as higher production cost impacts the end buyers. It is here, we face challenges in terms of competing with the world market. In the given circumstances, we have shifted our focus to non-GM products which are in demand in the developed countries. We are trying to find niche players and some receptive markets for India. We have some advantages of special payment terms with countries like Iran. They have their payments parked here against the export of petroleum products. So those funds can be utilized. Incidentally, Soybean doesn’t come under the terms of sanction, as it falls under the category of essential food items.

Q3. Since the budget session is round the corner, what is your expectation from the budget in the purview of the industry?

DJ: Well, we had an interim budget, just before the election wherein the Union Government had given focus on Agriculture sector and it should essentially work towards doubling the farmers’ income with the same thrust and focus. Personally, I feel the Government is working in the right direction which is reflected from the hike in the minimum support prices by the Government year after year. But certainly this is not the only solution.We need to give more thrust on raising our agriculture productivity and yield per hectare. At the same time, we also need to be more competitive in the processing of these products both in the domestic and export markets. There is a price differential which we are not able to compete. Hence, some support/incentives are also required. In the new budget, we expect the Government to take measures to curb the import of Palm Oil by implementing non-tariff barriers and quantitative restrictions. Government should also incentivize the crop production of oilseeds and provide adequate support. 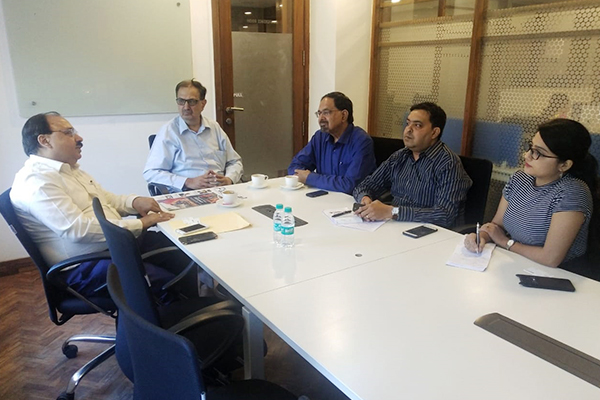 Q4. Besides, the MSP what other benefits the Government provides you?

Q5. What is the numeral that Indian soybean export hits today?

DJ: India exports Soybean Meal worth about Rs. 6000 Crores, which is far below our exports in 2013, which stood at Rs. 15,000 Crores. In 2015, our exports further plunged to Rs. 1,500 Crores. However, in the past three years, we have tried to re-build the numbers as we have been able to export around two million tonnes Soybean Meal in the last two years. There, is all likelihood of doubling this number, this year, provided we meet the price gaps.

Q6. How trade shows like IndusFood and Indusfood-Tech helping the export industry to grow?

DJ: Well, people who are connected to trade, industry get a common platform to meet and exchange their ideas through such trade shows and events. It also triggers business transactions and one can showcase his products and services and try to build relationships with the industry players through meetings arranged at such shows.

Q7. At the National Commodity and Derivatives Exchange, the Soybean contract for July delivery fell by Rs. 50 to Rs. 3,616 per quintal recently. What triggered this fall?

DJ: India is the single largest importer of edible oils in the world and every year, the country is importing Rs. 75,000 Crores worth of edible oils, second only to petroleum. Soft oils like Soybean, Sunflower seed and Palm Oils constitute the major components of import in edible oils. Import of soybean oil is also about 3 million tonnes annually. So, with the excess production in the world markets, oil-producing countries are trying to push quantities of edible oil to India and this is what triggered the price crash in the market, I feel. Our farmers are not able to compete with that price compared to the support received by the competing countries, though the Government intent is to increase domestic production. Farmers need a better quality of Seeds and Processing facilities but the excessive imports are killing our prices domestically.

Q8. Which are the major countries competing with India in the soybean sector?

DJ: Argentina, Brazil and USA are major producers of Soybean and Soymeal. But they also consume good amount in their own country while exporting their large quantities of Soybeans. However, Argentina has huge export surplus for Soymeal.

Q9. Have you been able to see the rising demand in Soybean from China because China imports a lot of Soybean and Indian players have an advantage because now with US, we have some tariff escalation issue at both the levels and China is opening up a bit in Agri and Food sector, so how do you see a market in China for soybean?

DJ: China is the world’s largest market for Soybean. Almost 2/3rd of Soybean exported in the world is consumed by China alone. But there is a shift in supply, instead of US, now more Brazilian Soybean has started getting into China’s market. As far as tariff war with US is concerned, India’s Soybean is still outpriced, so we can’t take the advantage of penetrating the market. India’s major interest is in export of Soybean Meal, not Soybeans as such. So we want to offer them the processed products.

The Soybean Processors Association of India (SOPA) is the only national-level organization representing the Soybean Processors, farmers, exporters and brokers in India, working towards prompting Soybeans as a viable crop. The main objective of SOPA is to encourage the development and promotion of Soybean Processors and Soy-Based products in the interest of the farmers as well as the processors.