Trajectory of employment in post-COVID-19 India

• COVID-19 has led to a major impact on the world of work, as the global economy is expected to contract by around 3% in 2020.
• ILO study COVID-19 World of Work of 29th April 2020 shows through the nowcasting model that the average global working hour has declined in the first quarter of 2020 by 4.5%. This is equivalent to approximately 130 million full-time jobs.
• More than 436 million enterprises face high risks of serious disruption. Most such enterprises are operating in the hardest-hit economic sectors, including wholesale and retail, manufacturing, accommodation and food services, and real estate and other business activities.
• Both the rural and the urban economy in India are expected to confront a huge employment crisis, given the presence of 96% of informal workers in the rural sector and 87% in the urban sector. 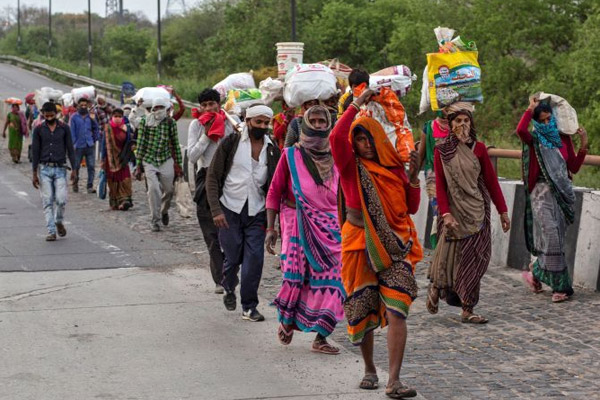 The world of work has altered vividly with the advent of the COVID-19 health catastrophe across the globe. The global economy is anticipated (IMF, 2020) to contract by -3% in 2020 and revive in 2021 to 5.8% across the world. While for India, GDP growth is expected to contract by 1.9% in 2020 and revive to 7.4% in 2021 due to the pandemic. ILO study COVID-19 World of Work of 29th April 2020 shows through the nowcasting model that the average global working hour has declined in the first quarter of 2020 by 4.5%. This is equivalent to approximately 130 million full-time jobs.

Almost 1.6 billion informal workers accounting for 76% of informal employment worldwide are significantly affected due to COVID-19 crisis. There is a decline in working hours of around 10.7% relative to the last quarter of 2019, which is equivalent to 305 million full-time jobs. Young people between the age of 15-24 are most likely to unemployed or be in worse quality jobs.

In other words, COVID-19 has posed a threat to life and livelihoods in equal measure across the globe as nearly half of the global workforce is at risk of losing livelihoods due to serious disruption in doing business as “worldwide, more than 436 million enterprises face high risks of serious disruption. Most of such enterprises are operating in the hardest-hit economic sectors, including some 232 million in wholesale and retail, 111 million in manufacturing, 51 million in accommodation and food services, and 42 million in real estate and other business activities. To address such vulnerabilities, ILO proposes large-scale and coordinated measures across three pillars i.e., protecting workers in the workplace, stimulating the economy and employment, and supporting jobs and income losses across the globe. Many countries across the world have initiated umpteen policy measures to combat this humanitarian predicament.

India is no exception to this disproportionate share of employment in the informal sector, which remains the most vulnerable in the current economic environment. This can be visualised through loss in employment and increasing unemployment in the post-COVID India. Recent CMIE data show a huge increment in the level of unemployment and corresponding joblessness between January to May 2020. The unemployment rate has risen significantly from 7.22% in January 2020 to 23.48% in May 2020 and 19.25% as on June 12, 2020.

Therefore, with the increase in lockdown during the fifth phase from June 1-30, 2020 and closing of all essential services and businesses across India, the unemployment level can worsen further.

The loss of employment among business persons in particular was estimated to be 18 million in April. Further, the urban unemployment rate is much higher as compared to the rural unemployment rate during this pandemic. Across states during May 2020, the unemployment rate is higher in Jharkhand (59.2%), Puducherry (58.2%), Bihar (46.2%) and Delhi (44.9%), while it is lower in Jammu and Kashmir (5.2%), Uttarakhand (5.9%) and Meghalaya (8%).

Consequently, total employment numbers have shown a massive fall by 114 million in April 2020. The national lockdown measures and their extension have undoubtedly affected the people at large engaged in the informal sector. Since CMIE datasets exhibit data discrepancies, employment numbers can be further validated through the CSO-Periodic Labour Force Survey (PLFS). During April and May 2020 some states such as, Puducherry, Haryana, Tamil Nadu, Karnataka, Tripura, Gujrat and Odisha have seen a decline in unemployment rates whereas states such as, Jharkhand, Delhi, Telagana, Punjab, Himachal Pradesh, Madhya Pradesh, Kerala, Goa, Chatisgarh and Jammu and Kashmir have seen a sharp rise.

There was a positive turnaround in employment trend from 455 million to 467 million during 2017-18 to 2018-19. But the unemployment rate remained historically high as compared to earlier periods. These contrasting macro figures of employment/unemployment may not in any case counter the potential loss of employment owing to the pandemic and the measures undertaken for its containment. Job losses and rising unemployment are largely conditioned by the predominance of informal sector employment in India that constitutes almost 92% of the total workforce.

Among the informal workers, the share of regular wage workers is much less as compared to the casual and self-employed workers. The share of self-employed workers was 56%, regular workers was 19% and casual workers was 26% in 2017-18. Across sectors, the presence of informal workers is the highest in agriculture (99%) followed by wholesale and retail (98%), construction sector (97%), and manufacturing (92%). While the share of the informal workforce is less in case of public administration (37%) and electricity (53%) as compared to other sectors. Given this scenario, the pandemic is expected to affect the secondary sector (construction and manufacturing) and services sector (real estate, community service and transport & communication) at large.

The post-COVID-19 scenario seems much gloomier in India, given the presence of vast informal economy and reverse migration of migrant workers from cities to villages at the present juncture. The post lockdown period will give rise to a huge shortfall of workers in various states of India. It is also expected that most of the workers in the unorganized sector will find it difficult to enter in the job market further if the enterprise does not intend to take them back.

While analysing the crisis faced by migrant workers, studies strongly advocate for a unified labour market and presence of universal social security system to ensure security, safety, and dignity to all workers. This pandemic has made the vulnerability of the Indian workforce explicit as the resilience to withstand any shock of this kind is nearly absent.

In this respect, both central and state governments need to undertake innovative policies through social protection schemes to tackle the humanitarian crisis as well as joblessness that may arise in the short run. The central government has initiated in March 2020 Pradhan Mantri Garib Kalyan Yojana (PMGKY) amounting Rs 1.7 lakh crore and Aatma Nirbhar Bharat or Self-Reliant India package during this pandemic. But this package attracted lots of criticisms given its structure.

While the damage is already being done due to reverse migration, however, some of the state governments such as, Kerala, Uttar Pradesh, Odisha, have taken advantage out of the adversity, and have initiated tailor-made food for work and rural-employment guarantee programmes by skill-mapping of reverse migrants at Panchayat and local village levels. Besides, they are continuing with allocation of monthly food quotas and DCTs.

While analysing the recent joblessness and increasing unemployment across the globe, the ILO 2020 study suggests four pillars of action to lessen the impact of COVID-19. These include supporting enterprise, employment and income, stimulation of the economy and jobs through social protection measures and employment retention measures, protection of workers in the workplace, and lastly, using social dialogue between Government, workers, and employers to find an amicable solution.

Enquiry for Trajectory of employment in post-COVID-19 India