The RCEP region is an important market for Indian fisheries exporters. But even in the absence of the deal, India can explore other options to engage with RCEP nations to boost its fisheries exports. But this also necessitates boosting India’s fisheries infrastructure and taking steps to improve industry competitiveness. 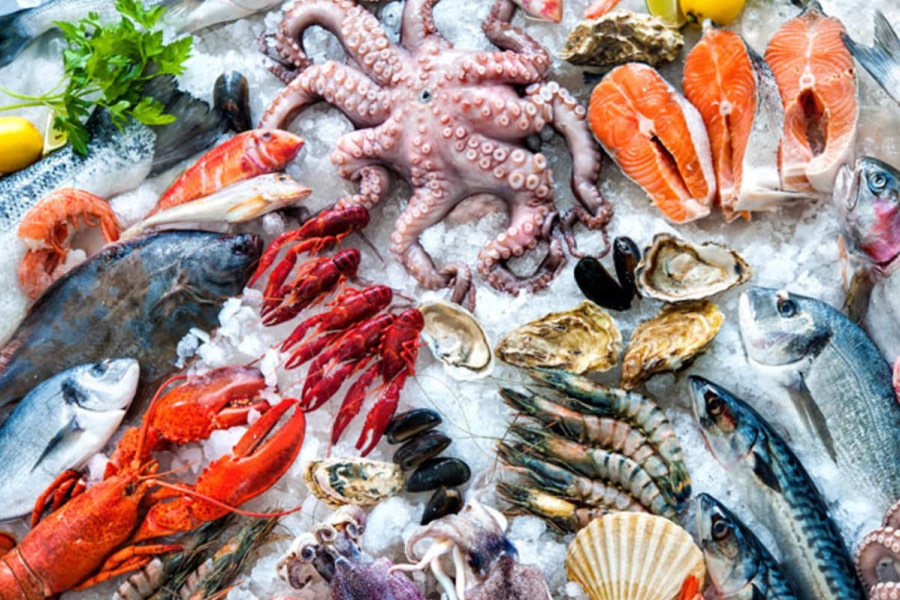 Southeast Asia has been an important part of India’s strategic foreign and trade endeavours ever since former Prime Minister Narsimha Rao engineered the famous Act-East Policy. The Regional Comprehensive Economic Partnership (RCEP) was seen to potentially provide a major leg up to India’s engagement with the region.

However, India’s concerns that RCEP would be a gateway for China to dump its products in Indian markets and it would lead to the ballooning of India’s trade deficit with RCEP made it walk out of the deal. (India has a trade deficit of about US$ 105 billion with 11 countries, including US$ 53 billion with just China).

While this move might have augured well for the country’s exchequer, there is understandable concern for the possible repercussions of the deal on some sectors, where India is relatively competitive and can benefit from reduced barriers to trade. One such sector is fisheries, where India’s exports to RCEP members was 36.64% of its total exports in the category in 2019.

RCEP is an important destination for India’s seafood sector. According to the ITC Trade Map, India’s trade balance with RCEP for fisheries over the last 3 years has been positive for most countries, barring Myanmar & Indonesia. China (US$ 1338.8 million), Japan (US$ 393.8 million), Vietnam (US$ 332.5 million), Thailand (US$ 224.6 million) and Malaysia (US$ 50.2 million) were the top destinations amongst RCEP for seafood exports by India in 2019. 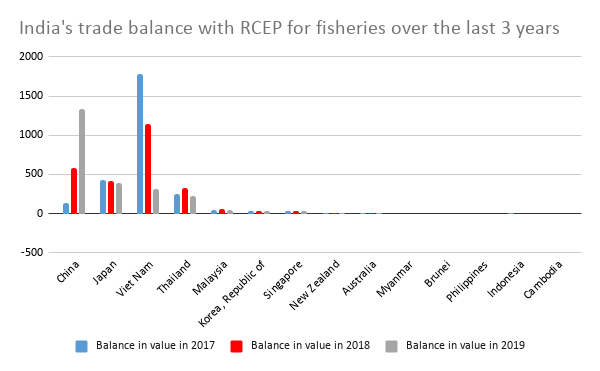 Source: ITC Trade Map. All figures in US$ million.

However, India’s fishing community, too, was concerned about entering the mega trade deal. One of the issues flagged was the entry of new Deep Sea Fishing vessels into the Indian Exclusive Economic Zones (EEC). This, it was believed, would lead to displacement of 7.5 million fisherfolk & exhaustion of our fishing resources. Chalasani Bhaskar, Agri ESG entrepreneur, however, counters this view:

Indian fishermen are not in a position right now to do any DSF either way (in our maritime waters or outside) because they don’t have the required infrastructure for deep sea fishing. So, there is nothing to complain about. Coming to the possibility of the catch being exhausted, seafood always replenishes itself; but only if it is fished sustainably. There are quotas on the amount of fish that can be caught.

To enhance its infrastructure, India also needs to address the lack of  adequate hatcheries for seed production. Dearth of sufficient infrastructure facilities in fishing harbours and landing centres also leads to post-harvest losses and reduction in the quality of fish landed, which in turn compromises the cost realisation. Further, according to MPEDA, countries such as Thailand (64%), China (35%) and Vietnam (26%) are making big strides in export of marine products through value addition. In contrast, the share of value-added products in volume in India’s exports is just 5%.

India’s shrimps’ exports have faced food safety and standards related barriers in Japan and other key markets like the US and EU. From time to time, we have faced restrictions. For example, in 2017, Thailand, imposed a temporary suspension of import of shrimps from India.

However, given that the concerns on RCEP make a deal untenable at present, India should explore alternative options to expand its fisheries trade in the region. One of the things it must do is diversify its export basket. Currently, India’s seafood exports are dominated by frozen shrimps and prawns exports.

India can opt to look at bilateral agreements with select partners for sectors where there is possibility of greater synergy. Jagdish Fofandi, National President, Seafood Association of India, opines that India should explore FTAs with all major fisheries importing countries in the region, barring China, which may not be too receptive post India’s RCEP exit. However, he also mentions that Japan could be a good prospect going forward:

Japan is already acting more positively towards the Indian seafood because whatever indirect entities they originally had, they are coming out of it, they are doing less testing of our products. So, Japan is now again growing gradually as a market.

Indian fisheries exporters need to diversify to other commodities too. For example, markets with great potential for India’s exports of rock lobsters, frozen are Thailand (US$ 1.1 million) & Australia (US$ 1.4 million). At the same time, they must add value to their seafood exports to have better price realisation in international markets.

Lastly, India needs to build a robust infrastructure network to enhance the performance of its fisheries sector. Schemes to attract investment in this sector and build a more sound infrastructure to support the players is the need of the hour.