Founded with a promise of authenticity, Telugu Foods is recognized as a leading manufacturer and exporter of ethnic South Indian food. After successfully exporting its products across markets, including US, Canada, Australia, New Zealand, Singapore, UK, Mauritius, Hong Kong, Panama, UAE, Kuwait and Europe,  the company is now looking to diversify into organic groceries and spice powders. 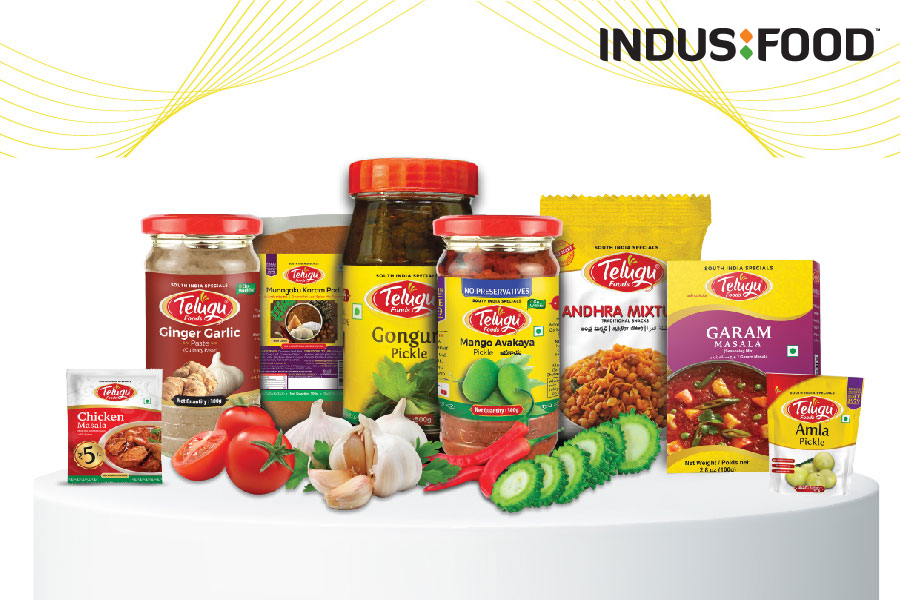 Back in 1979, the brand Telugu Foods was established by Frumar Agri Foods Pvt Ltd. with the mission of delivering the authenticity of ancient Andhra Pradesh’s diverse palate overseas.  The company identified an authenticity gap in the world market for Andhra Pradesh’s local cuisine, which is known for its strong flavors and spices.

Building on this ideology, Telugu Foods started out by manufacturing and exporting a variety of pickles, masalas, snacks, powders and pastes, which replicated the traditional homemade taste of Andhra Pradesh. Some of its popular retail packings of authentic foods from the state range from snacks like Chekodi, Karapusa and Sakinalu to exotic pickles like coriander and mint to South Indian chutney powders like drumstick leaf powder, Kandi Podi (lentil powder) etc.

Over the years, Telugu Foods expanded its portfolio from Andhra-style products to a wider range of South Indian products. While the brand has been guided by a sense of flavor and a seasoning of love, it has always stood by its promise of authenticity. Its portfolio now includes exciting South Indian foods like Kerala mixture, banana chips, jackfruit chips, Rava Idli, Rava Upma, flours, tamarind, jaggery and rice varieties like Sona Masoori and Kerala Matta. They have also grown to serve the palate of a younger age group with relished flavors such as Jalapeno and barbecue.

Their manufacturing unit is a US FDA-approved facility located in Hyderabad, India with an ISO:22000:2018 certification. Apart from their own manufacturing, they are also a one-stop-shop for sourcing authentic South Indian food & FMCG products ranging from Andhra Sona Masoori to Tamil Nadu Chikkis, Oils and popular coffee like ‘Narasu’s’.

With a vow to serve mankind with the best quality and hygienic South Indian food, the vision of Telugu Foods is simple yet powerful. They have a passionate team that is constantly evolving and dedicated to curate fine delicacies along with tasteful experiences. Along with traditional taste, consistent quality is another attribute that drives customer loyalty to Telugu Foods. Their sense of flavor and traditional methodologies have helped them establish themselves as a leading manufacturer and global exporter of pickles, snacks, masalas, rice, flours, and other food commodities.

Their brand is recognized as a leader of ethnic South Indian foods in countries like the US, Canada, and Australia among many others. Their targeting is crisp with the core customer being overseas ethnic Indians and any other consumers interested in South Indian food. For their go-to-market approach, they believe in precise identification of the target segment and serving them with unique offerings of consistent quality as a critical component for establishing brand equity. Thus, their brand name, vision, and all offerings are tailored according to their target audience.

Telugu Foods has earned its identity as a brand that offers unique recipes with the consistent quality of South Indian food. They are continually evolving to resonate with their customer by seeking feedbacks, expanding product ranges, and going digital.

Some of the major achievements of Telugu Foods in the past few years include:

Going forward, Telugu Foods is looking to expand in the frozen food category. They have already launched frozen Samosas and exotic South Indian fruits and are in the process of launching entrees. Further, they are also looking to venture into organic groceries and expand their range of spice powders.

This blog is a part of TPCI’s Connect initiative.

Gulab Oils: The promise of purity
Since the last 5 decades, Gulab Oils aspired to make he...

An ‘Indian Treat’ for the global palate
With a legacy of more than five decades, Indian Treat r...

VR Industries Pvt Ltd: In harmony with quality and taste
Being the only food company with a maximum variety of b...

Enquiry for Telugu foods: A vivid experience of South India