TEA – Drink of Etiquette to Social Beverage of Hospitality

Not long ago Tea was a symbol of highly sophisticated social etiquette in aristocratic society. Presently, people of all sections of society commonly consume tea as a social beverage. Served in the homes of both the rich and the poor, tea has played a pivotal role in bridging the inequalities in our society. 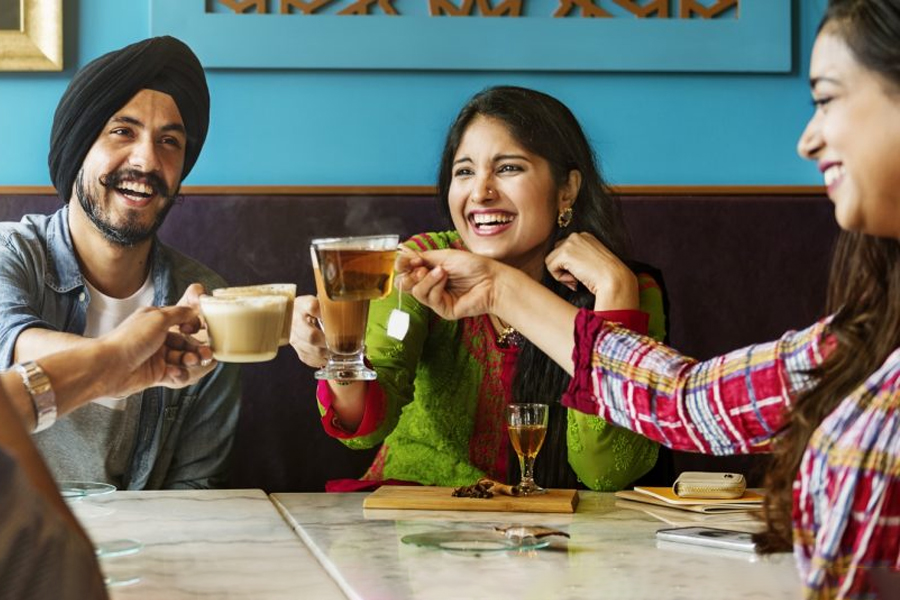 Unlike what many of us would perceive, there was no ancient tradition of drinking tea in India. In fact, Indians were not aware of tea as a beverage until as recently as the 18th century, when the East India Company introduced the tea culture to India. While tea is now a favourite refreshing beverage for many Indians, it was a different story altogether decades ago. In fact, many were suspicious of tea culture being part of a British conspiracy to Anglicise Indians.

Isn’t it reasonable to ask what Indians consumed in the morning or rest of the day before they were introduced to tea? Was it milk or milk products like buttermilk or lassi? Or, was it a homemade succulent drink extracted from the palm tree, or Mahua, or a drink made from rice or barley during the day? One thing is for certain, though. None of them are as popular as tea!

The journey of nearly 2,000 years of tea is fascinating, as are its preparation and drinking styles, which vary from place to place and person to person.  T’e or Ch’a, an extract of the leaves of a plant, was used as a medicinal preparation in China.  In its journey from China to Europe through the Dutch to Britons in the 16th century and the world, T’e became recognised and cherished as ‘Taste & Energy Admitted’ or ‘Traditional English Ale’ (Tea).

Wild tea bushes were discovered in some mountainous regions of Assam where, according to legends, the Singphow tribe had been consuming it for medicinal purposes since the 12th century. Yet the British continued acquiring seeds and plants from China along with tea workers for cultivation of Tea in India for commercial purposes. After much deliberation, the green leaves of wild bushes found in Assam were recognised as tea.  Subsequently, the East India Company allowed its plantation in Assam and other areas on fertile lands for commercial purposes.  Today, Assam is the largest tea-growing state, not only in India but also across the world.  Its low altitude topography provides ideal conditions for growing tea. Sub-tropical climate with high humidity, heavy rainfall, rich soil, etc. are some of the important factors for growing high quality tea.

Like any other product, tea also had to go through many vicissitudes in its centuries-old journey before becoming a social beverage from a medicinal drink!  In the early 1900s, tea plantation was vehemently opposed in India for harmful properties of ‘Tannin’, which is used to harden leather in tanneries. Tannin is harmful to the human body, causing damage to the intestine and affecting the digestion process. On the other hand, many Indians obsessed with fair skin superstitiously believe that tea darkens the skin.

Mahatma Gandhi in his book ‘Aarogya ki Kunji’ (key to health), has described tea as ‘an intoxicating substance’.  Concerned by poor labour practices for tea garden workers, he also referred to tea as the ‘blood of tea garden workers’, to show empathy and solidarity with tea garden workers.  However, despite the hostile environment, tea growers over the years managed to overcome their adversaries with the help of policies by successive governments and aggressive promotional activities. Viceroy Lord Curzon also greatly helped the tea industry by levying Tea Cess in 1903 to raise funds for marketing and promotion of tea in India.

Then came the decade of the 1960s when the working classes accepted tea as their ‘favourite beverage’.  Pocket friendly ‘Crush, Tear and Curl’ (CTC), a method of boiling tea dust in water and milk, sparked a boom in sales through roadside tea stalls across the country.  Obsessed by the pleasing aroma and taste, Indians helped turn the low cost tea into a social beverage.  Promoted primarily as a stimulating drink, tea entered into Indian households in no time. Soon enough, overindulgence with tea was so high that every intoxicating beverage became secondary.

According to the Tea Board of India, India is the largest tea consuming nation, with more than 80% of Indian households reportedly drinking tea. One billion kilograms of tea was consumed in India during the financial year 2021. However, per capita tea consumption is a modest 750 grams per person per year.

Dried green tea leaves lose their identity when mixed with steaming water and give the water a new color and aroma. Today people are crazily addicted to this light brown or light chocolatey (when prepared with milk) coloured beverage.  The medicinal drink of yesteryears is recognized today as a social beverage.  It is currently second only to the water consumed by people in the world.

Citizens of the UK and other European countries enthusiastically accepted tea as a beverage in their daily lives.  However, these countries had to import tea from China, India and other countries for their domestic consumption. India, which was gradually increasing its production capacity of tea to challenge the Chinese monopoly, saw tea as a valued major foreign exchange earner product. Hence, after independence, India targeted these countries as export destinations. With the upsurge in population, demand for tea also increased across the world. 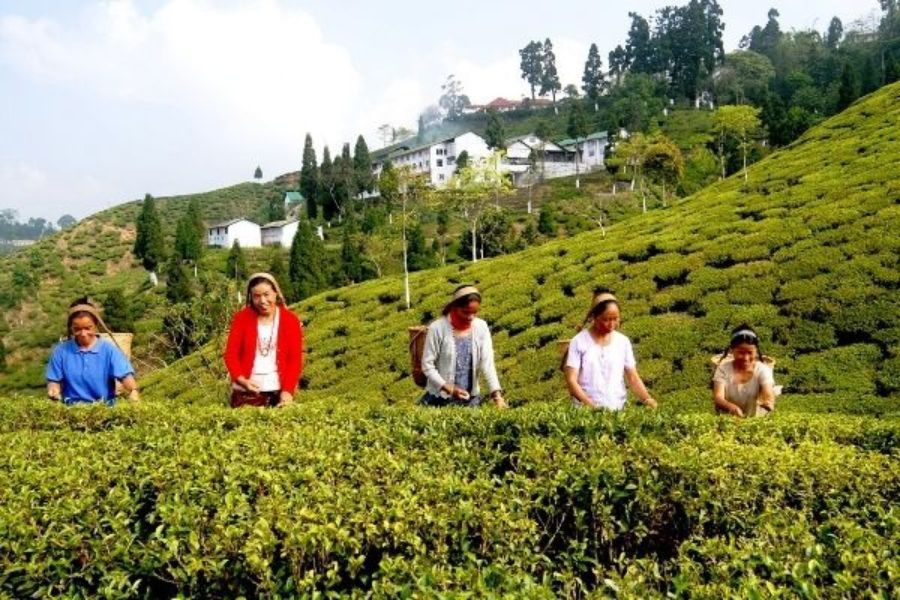 Tea varieties in India are identified on the basis of the regions where they are grown. Indian ‘Black’ tea, famous for its aroma and taste, is grown in tea gardens spread across Assam, Darjeeling, Nilgiri, Sikkim, Munnar, Dooars-Terai, and Tripura. China is a major producer of ‘green’ tea, famous for its refreshing taste and so is Japan, which has its own distinct variety.  Green tea is also grown in Kangra, Himachal Pradesh from where it is exported to Central Asia, Afghanistan and other countries.

An astonishing fact is that tea is not a specific-days crop.  It is all about the ‘RIGHT’- the right season to plant, the right time to pluck the right size of leaf, and the right period to let the leaves rest. Tea blossoms in a variety of climates. The tea plant usually takes about two years to become a mature plant and five years to become a produce. The tender leaves and buds are used for tea products, and it is important to prune the plant at the ‘right’ time to help new growth. After pruning, the same plant can develop different flavours depending upon the soil, altitude, how the plant is embedded and how tea planters handle the growing leaves. The contribution of ‘human hands’ from ‘hand-plucking’ to ‘hand-sorting’ to ‘hand-processing’ to ‘hand-packing’ is very significant in the production of tea.

Tea, an ‘intoxicating thunderstorm of aroma and freshness’, whether served in glass in dhabas or roadside tea stalls in cities, or in a cup in urban areas, or in a kulhad in mushrooming urban chai cafes, or in pricey crockery in a luxury hotel.  The taste and aroma depend on how the tea is prepared and not how it is served.  Tea preparation also varies greatly from place to place to place and people to people. Various regions in India perfected their own way of preparing tea using local spices to entice people.  The aroma and flavour of black tea leaves, whether from Assam or from Darjeeling, changes from one region to another with a blend of saffron strands, cardamom, nutmeg, ginger, fennel, rose petals, etc.  Every sip of this specially crafted tea gives limitless joy and delight.

Marketing and product innovation over the years have brought many premium versions of this common man’s beverage to cater to the elite audience. Some tea varieties are so expensive almost 99.9% people worldwide will not be able to taste these varieties for the rest of their lives.  Some of them are –

Worth visiting your write up over a cup of tea .Amazing facts and figures. Thank you for so much information.

I never knew tea was that popular in India! I thought only we Russians drink it that much )) And Indian tea is our favourite at all times!

What a great piece of article!
Although wasn’t aware of the fact that Tea is also know as Traditional English Ale.

Sustainable fashion: An inevitable necessity or another fad?
Given the rise in the number of environmentally conscio...

Enquiry for TEA – Drink of Etiquette to Social Beverage of Hospitality