India’s journey from import dependency to emerging the second-largest PPE manufacturer in the world last year, has been well documented as a vibrant case study for Atma Nirbhar Bharat. But is it ready to sustain in the long term as a competitive exporter? 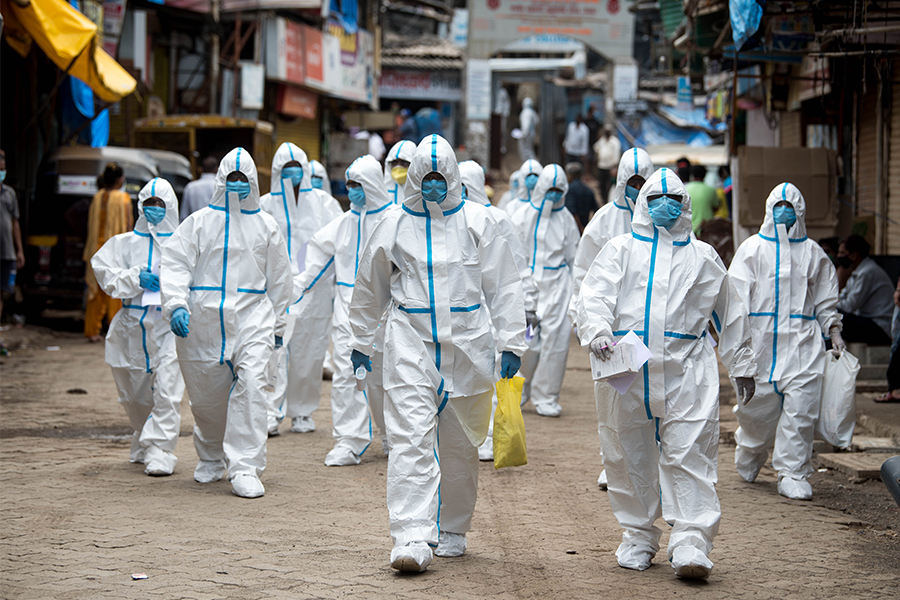 As the novel coronavirus emerged in 2020, spreading its tentacles all across the globe, countries were struggling with basic amenities to fight against the virus. One such commodity was personal protective equipment (PPE) kits, which were mandatorily required by the frontline workers (doctors, nurses and paramedical staff) to protect them from contracting the virus.  The journey from India being completely import dependent for PPE to now producing surplus of PPE’s in the ongoing second wave went through many hurdles.

In the initial stages of the outbreak, in March 2020, India was barely producing any PPE kits in the grade set as a standard against COVID-19 by the Indian government, forcing the Centre to impose a blanket ban on exports. The Government was facing a tough time, as there was zero production capacity and only a few days in hand to ramp up production as the case load was spreading like wildfire. India was competing against major suppliers of PPE kits – Malaysia, Vietnam, Thailand and Germany, with China holding the largest share.

The basic issues faced by the manufactures were:

(a) Adherence to stringent quality standards: A major challenge was the quality of the PPE kits manufactured, which had to comply with the stringent quality standards. For example, a report revealed that a majority of local manufacturers were not able to produce the right fabric to withstand Synthetic Blood Penetration Test in accordance with ISO 16603:2004 (Class-3 exposure) specifications. Complicating the situation further was the heterogeneity of regulations. To rectify this situation, the government has designated some laboratories that can evaluate the kits and asked industry to prepare for global certification.

(b) Blanket ban on exports: The exports of the PPE kit had to be banned in January 2020, as India did not have enough surplus and was struggling to meet the domestic demand. The Textile Ministry needed time for preparing international  certifications in order to export.

(c) Losing on trade opportunities: The global personal protective equipment market was valued at US$ 77.36 billion in 2020. Since the industry needed time for certifications and ramping up their production along with blanket ban on exports, India lost the trading opportunity whereas it was facing huge demands from markets like USA, UK and EU.

The Government of India undertook various initiatives which led to the success of Indian textile industry being the second largest manufacturer of PPEs across the world. Ministry of Textiles and Ministry of Health and Family Welfare roped in different institutions and organisations, and constituted empowered committees and groups to help tackle the hurdles and ensure all the gaps in the supply chain were plugged in.

For example, the Indian Railways and the Indian Navy were actively involved in PPE production. This led to the successful development of the indigenous supply chain. Thus, as of  December 2020, India was the second largest manufacturer of PPE kits across the world, with 450,000 units being produced daily by over 1,100 manufacturers.

The sector is one of the leading ones in realizing its goal towards Atma Nirbhar Bharat Abhiyan. The supply of indigenous PPE kits had surpassed the domestic demand, and India is reported to have exported to the US, the UK, Senegal, Slovenia, and UAE.

Note: The above items have been identified as PPE as per Trade Map identification of medical items.

The Government of India also constituted an empowered committee to manage the operational challenges and for facilitating the availability of time-critical medical supplies. The Cabinet Secretary also monitored all the challenges and issues and addressed them in a time-bound manner. This led to speedy removal of export ban in June 2020 itself and thereby ramping up the exports.

PPE production came as a boost for the textile industry as it faced nearly 84% fall in apparel sales and an acute shortage of labour due to the pandemic in the first quarter. This whole well executed chain of activities demonstrates and highlights the role of the government as a facilitator. This process involved extra-ordinary leadership along with major ground-level execution. The commitment of all stakeholders from the top to bottom and a steady monitoring of the scope along with a number of speedy and accurate initiatives showed the way to self-sufficiency.

Not only has the country  become self-sufficient but also a global exporter. This successful journey should further inspire other indigenous industries to venture into manufacturing of high-quality goods and lead India to become a global supplier thereby increasing trade quality and generating revenues.

Moving towards the next generation of PPEs

However, it is pertinent to ask what does the future hold for the PPE industry? Has the industry reached its saturation point as far as the demand is concerned? Or what should the PPE makers do when demand for them reduces considerably? Organizations like the World Health Organization opine that these  products are here to stay.

The efforts to prevent and treat the virus are being countered by emergence of new mutants. The WHO estimates a requirement for 89 million medical masks each month along with 76 million examination gloves and 1.6 million medical goggles. The global PPE market is expected to grow at a CAGR of roughly 6.1% and reach US$ 57.6 billion in 2024.

As discussed in a previous blog, PPE kits need to be developed in accordance with stringent standards to make a mark in the export market. However, there is a real possibility that governments build buffers for such crises now in future, just like they do for food. Besides, PPE demand could also rise beyond the medical realm to workplaces and day-to-day lives.

A study expects the future of PPEs to be driven by innovation tailored to the needs of the users, disruptive business models, and advent of smart and wearable PPE products. For example, a company has developed a mask, which changes colours to indicate when it needs to be replaced. Similarly, the next generation of PPEs could be all in one and may do away with the need of separate protective elements like masks, goggles and gloves. These innovations will be crucial in transforming the workplace to a connected domain enhancing worker safety and productivity. It would be only apt for the industry to leverage this initial success and look for possible product/market segments to consolidate its standing in the international arena.

Enquiry for Scarcity to abundance: PPE manufacturing in India