RoDTEP: The end justifies the means

Exporters would benefit from early announcement of RoDTEP rates across sectors, as well as a seamless process for claiming benefits. While there is currently ambiguity on the exact outlay given budgetary constraints, the scheme needs to be viewed from the perspective of its potential to revive India’s exports and encourage greater private sector investment.

The US had argued that India offered prohibited export subsidies to its exporters which were worth over US$ 7 billion annually and this was discretionary to its interests. WTO norms prohibit a country having a per capita income of over US$ 1,000 to offer such subsidies (India crossed this benchmark in 2017.) The panel gave 6 months to India to do away with these prohibited subsidies. This led to the germination of the Remission of Duties and Taxes on Exported Products (RoDTEP) scheme, which aims to provide targeted subsidies that are in contravention to WTO norms.

The RoDTEP scheme will subsume the MEIS and Rebate of State and Central Taxes and Levies (RoSCTL). It will allow reimbursement of taxes and duties, which are not exempted or refunded under any other scheme in accordance with WTO norms. The Finance Ministry has recently notified that the RoDTEP scheme will encompass all export goods from January 1, 2021. However, the government is still working to finalise rates for the RoDTEP scheme, based on the recommendations of the GK Pillai committee.

(a) Central & state taxes on the fuel used for transportation of export products;

(b) The duty levied on electricity used for manufacturing;

Secondly, while the MEIS scheme covers almost 8,000 goods, the RoDTEP scheme will encompass all export goods, with priority being given to labour-intensive sectors that are enjoying benefits under MEIS Scheme at 2%, 3% or 5% of the export value from January 1, 2021. Merchant exporters (traders) and manufacturer exporters are also eligible to benefit from the scheme.

In addition to the above advantages, the RoDTEP Scheme is expected to enhance India’s competitiveness in foreign markets as it allows exporters meet international criteria, and, thus, augment business growth. Its monitoring and audit mechanisms are expected to usher in greater transparency, along with faster clearance through a digital platform.

Trade talk: What does the industry feel about the scheme?

An analysis reveals that the MEIS has not achieved expected results during FY 17 to FY19. While India’s MEIS exports grew 14.2% from US$ 131.32 billion to US$ 149.94 billion; its non MEIS exports rose 31.6% from US$ 127.68 billion to US$ 168 billion. It further adds that during this period, exports from seven key labour-intensive sectors, ranging from textiles & garments to agriculture and gem & jewellery, barely grew. 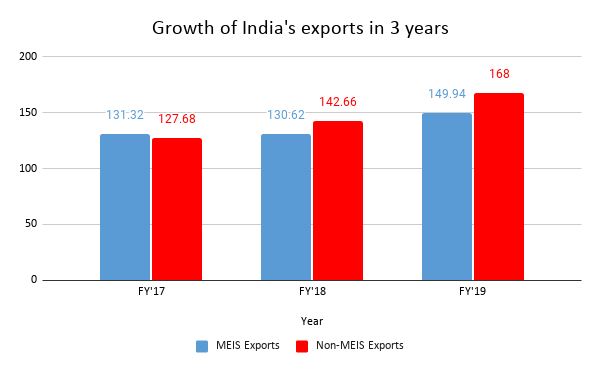 Currently, industry perspectives are understandably mixed across sectors regarding the RoDTEP scheme. Pankaj Mohindroo, Chairman, India Mobile and Electronics Affiliation (ICEA), opines that RoDTEP is crucial to address India’s deep disabilities vis-à-vis its opponents for reinforcing electronics manufacturing and making India the world’s top exporter by 2025. The organisation has proposed a RoDTEP charge of 2% on smartphones, 2.4% on function telephones, 2% on tablets and laptops, 3.4% on battery chargers and 1.48% on battery packs to support the electronics sector.

Gurnam Arora, Joint MD, Kohinoor Foods Ltd is excited about the broad scope of the new scheme for the rice sector. He says:

Rice is a major product in the agricultural export basket of the country and Basmati rice and non-basmati rice account for Ranks 1 and 2 respectively in the APEDA products exports. Rice exports earn upwards of Rs 50,000 cr of foreign exchange to the country. A fair incentive under the RoDTEP will lead to a massive boost to rice exports and the foreign exchange earning to the nation.

Nirav Vaishnav, Export Head, Jalaram Ceramics adds, “We are in competition with China in other international markets, so if we have to expand our exports in other markets, we need to get total drawback benefits like the one available in MEIS Scheme.

On the other hand, there are those who are worried about the ambiguity of the scheme. One of the main issues for the RoDTEP, against the MEIS is that while the former offers a refund, the latter offers incentives. This requires proper documentation, which can be difficult to obtain. For example, if the transporter gives a bill for transportation charges, but the invoice does not specify what amount of diesel is used & what taxes are actually paid, it  creates ambiguity and may actually create challenges for the exporters. Also, calculating the rates for each product is also complex, and open to differing interpretations. For instance, the GK Pillai committee had undertaken a study to ascertain tax incidence in textiles and readymade garments (chapters 62 and 63). This involves even calculating the tax incidence on the final product due to the tax on fertilisers used by cotton farmers.

We have put forward a few points to the government for consideration including a minimum of 2% RoDTEP benefit for as applicable to all engineering products as Residual category instead of the 0.5% announced and allowing the benefit of RoDTEP for payment of IGST apart from only Import duty.

Similarly, there are concerns as to how the new scheme will pan out under India’s Foreign Trade Policy. Praveen Vashishtha, Founder, Gxpress, opines:

The challenge for the government right now will be to design the new Foreign Trade Policy in a way that it is able to provide the right climate to exporters to increase their business even without extending direct export sops. Extension of the Production Linked Incentive scheme to more sectors, removal of infrastructure bottlenecks, avoiding delays in shipments and refunds and examining ways for better coordination with states could be some aspects that the FTP may touch upon.

Factually, however, the government has only budgeted Rs 13,000 crore for the scheme in FY 2022 as compared to the initially earmarked Rs 50,000 crore. This is also just a third of the MEIS benefits envisaged in FY 2020. The outlay for the first three quarters of the current fiscal was at just Rs 15,555 crore. According to exporters, the lower outlay could considerably delay the recovery in exports post-COVID. Also they have highlighted that the proposed amendment of the IGST Act, would deprive them of the current “seamless” refund facility for exporters. They will have to then opt for the time consuming ITC (input tax credit) route.

In the interest of removing ambiguity for exporters as they negotiate prices with international buyers, it is important to announce RoDTEP rates at the earliest. Secondly, the process should be as seamless as possible for exporters to be able to claim their refunds in a time bound manner. Lastly, even considering the current budgetary constraints, RoDTEP should be viewed from the perspective of its potential to boost India’s competitiveness, encourage greater private sector investment in exports, and bring down the trade deficit. Therefore, decisions on rates should be based on actual need (tax incidence of each sector) to the extent possible, which must be ascertained through extensive consultations and consensus building.

Enquiry for RoDTEP: The end justifies the means