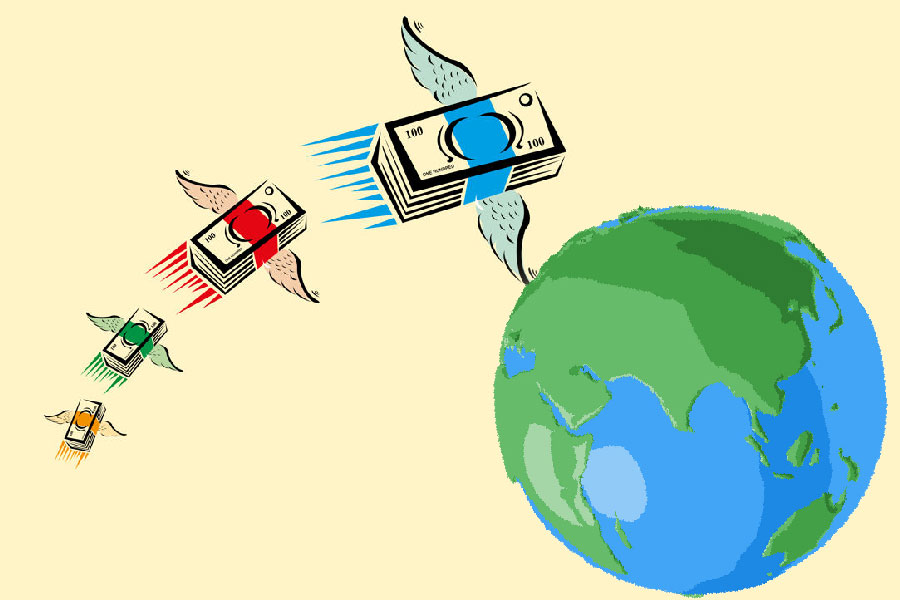 The ‘World Migration Report 2020’ ranks USA, Germany, Saudi Arabia, Russian Federation, UK, UAE, France, Canada, Australia and Italy as the top destinations for international migration. This report by the International Organisation for Migration also points out that India has the largest number of migrant labourers living abroad (17.5 million). Consequently, India was the highest recipient of remittances in the world, according to the UN agency.

Remittances, or money transfers from citizens working abroad, are not merely funds for the folks back home, but also a lifeline for development in many developing and less developed countries. For example, in some areas of Somalia, they accounted for more than 70% of GDP in 2006 as per the findings of World Bank. According to the International Monetary Fund (IMF), these countercyclical flows to low-income countries are around 6% of their gross domestic product (GDP), compared with about 2% of GDP for middle-income countries. It estimates that unrecorded flows through informal channels are at least 50% larger than recorded flows. These international transfers of wealth are used to raise national savings, reduce the constraint associated with foreign exchange and balance of payments, and contribute to development budget in the migrants’ home countries. Consequently, they’re also an important weapon in reduction and eradication of poverty. They also serve as a key mechanism for boosting consumption in a migrant worker’s home country. 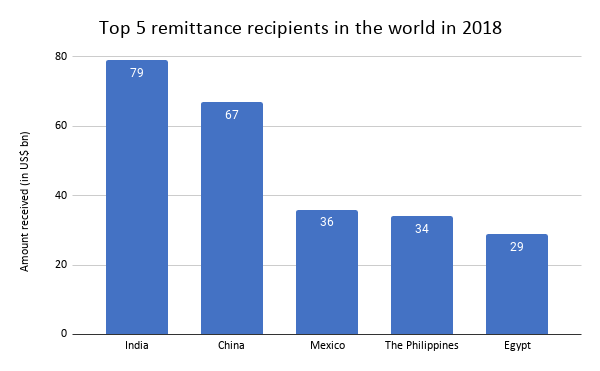 Source: World Bank; Note: The figures represent the amount received (in US$ bn).

Typically, increasing during economic downturns or after a natural disaster in the migrants’ home countries, when private capital flows tend to decrease, remittances are very important engines of economic growth for these regions. That these flows are usually resilient against financial distress is apparent by the fact that the number of migrants—and hence remittances—continued to rise even during the global financial crisis that began in 2008.

However, COVID-19 has severely decreased remittance flows all over the world. Asian Development Bank’s August 2020 brief titled ‘COVID-19 Impact on International Migration, Remittances, and Recipient Households in Developing Asia’, states the remittance flows to developing Asia are set to plunge amid the pandemic. It notes that the Asia-Pacific region, which constitutes a third of the global migrant workforce (91 million), is likely to suffer losses of about US$ 31.4-54.3 billion. The World Bank reverberates the same sentiment when it predicts that international remittance flows will face their sharpest decline in history, falling by an expected 20% in 2020 to US$ 445 billion. It also goes on to state that remittances to India are likely to drop by 23% in 2020 from US$ 83 billion last year to US$ 64 billion owing to the economic crisis induced by the coronavirus pandemic. This is an important development since drop in remittances is likely to heighten economic, fiscal and social pressures on governments. 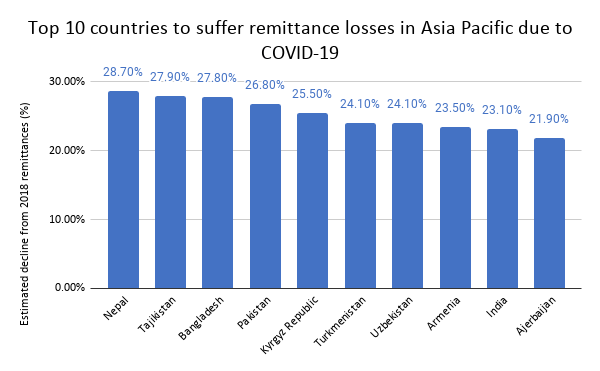 This simmering remittances crisis is the result of the macroeconomic pressures created by the pandemic. “The ongoing economic recession caused by COVID-19 is taking a severe toll on the ability to send money home and makes it all the more vital that we shorten the time to recovery for advanced economies,” notes World Bank Group President David Malpass.

The shutdown measures across the globe to contain the dissemination of the novel coronavirus have plunged the global economy into a severe contraction. The World Bank in its June 2020 Global Economic Prospects, forecasts that the global economy will shrink by 5.2% this year. This is said to be the deepest recession since the Second World War, with the largest fraction of economies experiencing declines in per capita output since 1870.

As domestic demand and supply, trade and finance take a back seat, economic activity among advanced economies is anticipated to fall 7% in 2020. Subsequently, per capita incomes are projected to decline by 3.6%, which will push millions of people into extreme poverty this year. What will also dwindle the size of remittances is the unprecedented collapse in oil demand, a surge in oil inventories, and, in March, the steepest one-month decline in oil prices on record. Protracted low oil prices and slowdown of economic activity in the Middle East and North Africa could have grave consequences such as compromising on the ability of migrants to send remittances to their homes.

Another factor that is likely to cause a crippling blow to migrant workers in international countries is the precipitating rise in unemployment across the globe. International Labour Organization predicts that COVID-19 impact could cause 195 million job losses across the world. Some of the sectors that are the worst casualties of this are: food and accommodation (144 million workers), retail and wholesale (482 million); business services and administration (157 million); and manufacturing (463 million). It notes that Arab States and Europe have seen the worst impact on employment in percentage terms. Consequently, a significant number of international migrants are being forced to return to their home countries.

There are a number of options that can be explored in order to arrest this cascading dip in remittances. One option is to create awareness in the global community to recognize the benefit of keeping migrants where they are, that is, in their host countries. This is because these migrants will play an important role in sustaining and restarting core services in their economies and thereby allow remittances transmitted to recipient countries to keep flowing.

Secondly, international financial institutions must also step in to help migrant-source countries not only fight the pandemic but also to offer a cushion against the shock of losing these private income flows. This will go a long way in supporting the governments in these nations and thereby the people inhabiting them.

Thirdly, ensuring that senders and receivers get access to digital channels is critical to keep remittances flowing during lockdowns and limited mobility. Investing in building digital and financial literacy skills of migrants and their families in both sending and receiving countries will therefore be crucial in keeping this flow of money going. Interoperability of remittance technologies across platforms like national post offices, banks and money transfer operators should also be promoted to help reduce costs.

Fourthly, offering a tax credit to remittance service providers equal to the reduction in fees paid by remittance senders and recipients is another idea that could be implemented. At the same time, imposition of taxes on remittances should be avoided by source and recipient countries, given the current economic hardships.

Finally, deem money transfer agents as an essential finance service, so that they can continue functioning amidst the pandemic, thereby allowing migrants to continue transmitting funds. At the same time, given the health risks, proper hygiene and social distancing measures must be in place at agent outlets to ensure that safety is not compromised in this time of crisis.