• Saudi Arabia and UAE have taken united stand in their ongoing rivalry with Russia, which rejected OPEC’s demand (mainly Saudi Arabia’s) of reducing oil demand initially.
• Saudi Arabia has impudently decided to augment its oil production and supply. Its state-run oil giant vowed to hike production by 25% to a record 13 million barrels a day next month.
• Saudi has the second highest oil reserves after Venezuela. According to current estimates, 79.4% of the world’s proven oil reserves are located in OPEC Member Countries, with the bulk of OPEC oil reserves in the Middle East, amounting to 64.5% of the OPEC total.
• OPEC’s proven oil reserves currently stand at 1,189.80 billion barrels. This factor has emboldened Saudi Arabia to take such a bold and audacious decision of escalating oil production and exports. 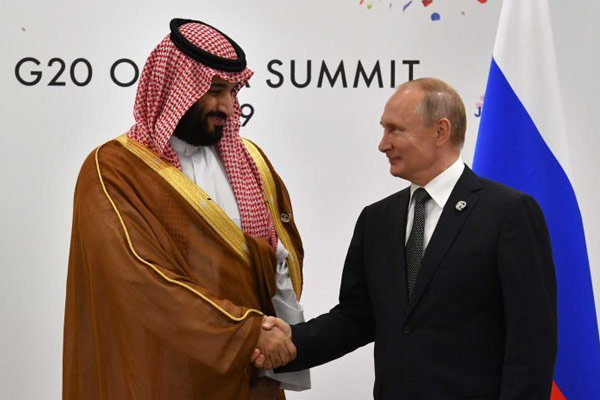 The very first OPEC price war was witnessed in 1973, when Organization of Petroleum Exporting Countries (OPEC) framed a cartel and raised to ostracize USA and punish the West in response to support for Israel. During this price war, OPEC countries raised the global oil prices from US$ 3 to US$ 12 in a span of three months.

If we try to assess the current global oil price scenario, there is a clear price war declared by Saudi Arabia, against Russia’s move to not limit oil production and exports. This had been proposed by OPEC to control the plummeting of oil prices.

Now the interesting observation here is the approach of Saudi Arabia which seems to be counterintutive policy action. Instead of pulling back the supply (as price of oil has declined), Saudi has decided to augment its oil production and supply. Saudi Arabia’s state-run oil giant vowed to hike production by 25% to a record 13 million barrels a day next month. If we go by basic principles of economics, supply generally plummets when there is a reduction in the price of product across major market structures including oligopoly and monopolistic competition. But here the application is little aberrant. Let’s have a look why Saudi Arabia is trying to be bold in deciding to proliferate its oil production and exports?

If we see, the production capacity and availability of crude oil across globe, Saudi has second highest oil reserves after Venezuela. According to current estimates, 79.4% of the world’s proven oil reserves are located in OPEC member countries, with the bulk of OPEC oil reserves in the Middle East, amounting to 64.5% of the OPEC total. OPEC member countries have made significant additions to their oil reserves in recent years, for example, by adopting best practices in the industry, realizing intensive explorations and enhanced recoveries. As a result, OPEC’s proven oil reserves currently stand at 1,189.80 billion barrels. This factor has emboldened Saudi Arabia to take such an audacious decision of escalating oil production and exports.

As Saudi Arabia is offering discounts of US$ 4-6 per barrel for Asia, it won’t be just a commodity for investment opportunities but a fundamental policy for changing the energy market. Chinese refiners and the Chinese government, as well as other importers, will use this opportunity to purchase large amounts of physical oil for refining or storage. Low oil prices over the next few months will function essentially as a stimulus package for a struggling Chinese economy and will show up in reports as higher demand numbers.

So the Kingdom of Saudi Arabia will lower prices, increase supplies for export, sell more to China and other customers, and anticipate a rise in global demand numbers. This approach is based on the risky but pragmatic assumption that markets will react to higher demand data and significantly raise oil prices.

As per the data given in the table, there is a continuous rise in global demand of crude oil, so Saudi Arabia seems to have a cogent policy. The current drop in oil prices is unrelated to long-term structural weaknesses like peak demand, alternative energy technologies, or surging electric-vehicle use. Peak demand is a theory that may prove true someday, but it is no more likely today than it was at the start of 2020 when Brent was US$ 66 per barrel.

UAE too has joined Saudi in raising oil output by 3.6 million barrels per day. So, Saudi Arabia and UAE have taken a united stand in their ongoing battle with Russia. Going against Saudi Arabia had costed Russia in terms of oil- revenue. Since the position of Russia in front of OPEC economies seems enervated, KSA has leveraged this situation to address couple of issues which they might have anticipated before. It is a litmus test for Saudi Arabia, as their policymakers are already working in a direction to reduce oil dependency. If they are able to survive in “low price phase” of oil, then their macroeconomic fundamentals will be even more robust to handle any exacerbating scenarios in future.

Kingdom of Saudi Arabia as an economy is expected to experience structural change in coming quinquennium span of time. With vision 2030 to transform, diversify the economy and by reducing its dependency on oil especially for government revenues, different stakeholders (like households, investors, manufacturers, speculators) will be framing their sentiments and decisions accordingly. So, it is crucial to understand the current structural framework of the economy. Henceforth, the current oil price war should not be seen as a perennial policy phenomenon.

Enquiry for Oil prices: The Kingdom pushes for market dominance